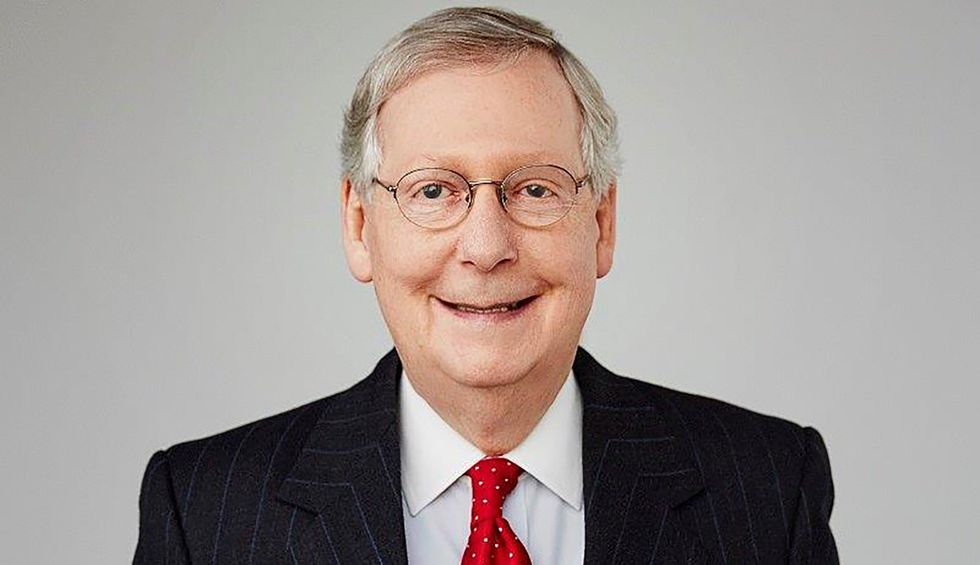 Appearing on far-right Laura Ingraham's Fox News show, Senate Majority Leader and college-educated deep sea turtle Mitch McConnell piped up with a rather peculiar claim: Granting statehood to Puerto Rico and/or the District of Columbia would be tantamount to "full-bore socialism."

“They plan to make the District of Columbia a state, that’d give them two new Democratic senators. Puerto Rico a state, that’d give them two more new Democratic senators. And as a former Supreme Court clerk yourself, you’ve surely noticed that they plan to expand the Supreme Court.“So this is full-bore socialism on the march in the House.”

The notion that granting a U.S. territory statehood by the same mechanisms provided by the Constitution to do exactly that is now not just socialism but the considerably more dangerous full-bore socialism is a perplexing claim, to say the least, until you remember that literally every Republican argument is premised, at heart, on refusing to understand what words mean.

Let us take a trip down memory lane, to the gauzy sepia-toned days of George Bush the Younger and the foundation of this very site. Do you remember those days? In the days of Clinton-then-Bush, there was an orchestrated and relentless effort to make the word liberal into a dirty word. Politicians warned of liberal policies and liberal machinations; the catch-all insult directed toward any Democratic candidate running for any office is that they were a liberal who associated with liberals and promoted liberal ideas and the liberals were coming to your children's schools to teach them liberal things and feed them liberal lunches and tell them to disrespect their parents.

It was borne from the Newt Gingrich and Frank Luntz efforts to worditize our discourse into short, insulting phrases directed at whatever Republicans did not like, an extremely successful, if unabashedly propaganda-based, method of controlling the national narrative. It is why, to this day, Republican lawmakers refer to "Democrat policies" instead of "Democratic policies," et cetera, making each one of them sound borderline illiterate. It is how death panels became a thing. And it had at least the effect of turning "progressive" into a new (old) word by which the left and center-left identified themselves in attempts to sidestep the entire mess.

Today "liberal" is largely, if not entirely explicably, redeemed. It may have been because eight years of a scandal-free and generally well-run Obama presidency made frothing Republican panic about the word seem embarrassing; it may have been because Republican voices had squeezed the word for regular outrage-fodder so long over so much that there was no more juice to give. And so socialism it is. Everything is now not liberalism, but socialism. Everything.

Adding a state via U.S. Constitution? Socialism. Burger undercooked? Socialism. Amazon delivery late? Socialism. Basic expressions of compassion? Not just socialism, but mega-socialism. It is the new word for anything, anywhere that a prominent Republican believes an audience should be alarmed about, and it will be used in any context and without hesitation. The word does not mean what its definition declares it to mean; it has been repurposed to mean "contrary to Republican edicts."

But this is largely how all modern Republican rhetoric is crafted, which may be the reason CNN's Crossfire and similar shows became nonsensical shout-fests devoid of information and increasingly dismissive of expert voices. It is almost certainly a core reason behind replacement of those shows with, at this point, omnipresent panels of loudmouth partisan nonsense-spewers presented as the highest and only truly proper form of political debate. It is a dumbening of everything, a reduction of all debates on all subjects to a notecard-friendly list of dismissive insults that can be launched at a naysayer while still projecting a my colleague sense of authoritative decorum.

Latch on a word; craft ever-more-elaborate conspiracies for which the word can now be used as shorthand; wait for the less decorum-obsessed underbelly of the movement to ratchet up each conspiracy until the mere uttering of the word is enough to send Fox-watching base voters into pavlovian sweats.

None of the words mean, to the conservative base, what the rest of the planet has long agreed the words mean. They are stand-ins signifying which broad conspiracy the speaker intends the audience to imagine, as the players dance through the rest of their remarks. Bigotry against Muslim Americans is not proper, political tacticians agree. But if the base just happens to believe that something called sharia is threatening to break upon our shores, dismantling laws and Christianity alike via some mechanism that can not even be explained, much less stopped, now that will evoke the same necessary emotions without the speaker getting unnecessarily mired in figures or details. A picture may be worth a thousand words, but a shared, primal conspiracy theory is worth ten times as much.

We are now at the point where shorthand words used for longform conspiracies represent the near-entirety of conservative debate; from Fox News to Mitch McConnell's dramatic warning against adding another state, absolutely anything that a Republican with power doesn't like is now "socialism" because it simply is, that's why. It doesn't have to make sense, and it certainly does not have to square with the actual, non-conspiratorial meaning of the word. There are socialist countries trying to spread socialist concepts like affordable insulin and every non-Republican is in thrall to this socialist agenda whether they identify as socialist or not, proposing socialist policies and demanding socialist road improvements and socialist tax rates and socialist regulations against swindling consumers and socialist demands that meat be inspected for salmonella contamination and socialists are coming to your town and to your children's schools to indoctrinate them on socialist texts like the socialist Constitution that allows socialists to add Too Many States These Days.

Whether it is a sign that our political discourse has become hopelessly and irretrievably stupid or a momentary artifact that we will all feel damn embarrassed about twenty years down the line is unknowable. But I have my suspicions.