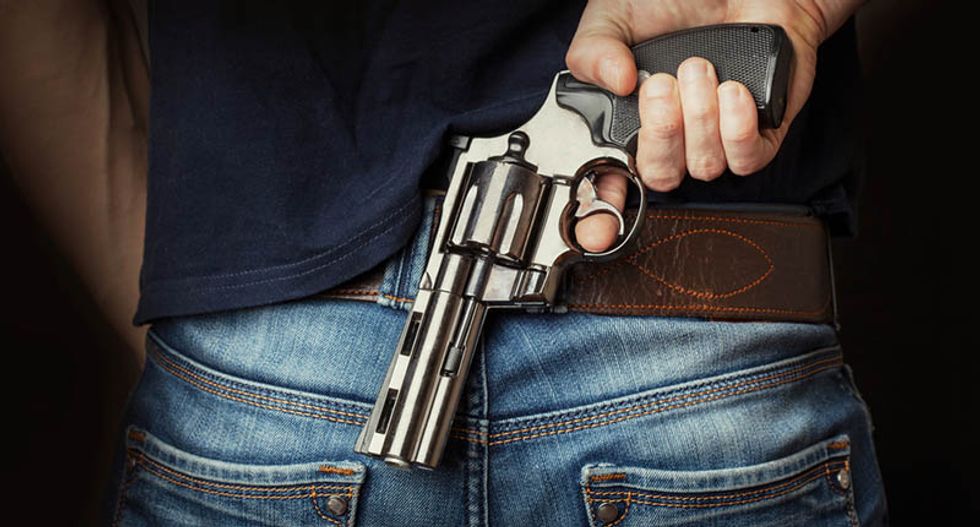 People are asking why the shooter in Virginia Beach used a gun to settle his workplace score. The answer is probably pretty simple.

When a man has a gun, he literally holds the power of life and death in his hand. That kind of power is extraordinarily seductive.

With a gun in his hand, a man can look around a room, a building, or a public area and specifically identify who will instantaneously die and whom he will allow to live. It’s a power that traditionally has only been held by doctors, priests, police and soldiers.

The power over life and death is greater and more intoxicating than any other power; it’s one of the reasons why some men are specifically drawn to these professions and historically have tried to regulate them to be male-only.

If you are not male and have never carried a gun in public, it’s only an imaginary experiment, but science shows that simply handling a gun alters men’s levels of testosterone and measurably increases their aggressive behavior.

As a result of this male aggression provoked in part by handling guns, in America guns are the second leading cause of death (just behind car crashes) among children between 1 and 19 years old.

We honor our soldiers who are willing to face gunfire; they can even board airplanes before anybody else, and TV commentators reflexively say, “Thank you for your service.” We honor our cops for their willingness to face gunfire; when one dies, the funeral typically is a major, citywide event.

Yet more children die from firearms in the United States every year than all the police and American military deaths worldwide combined. No gate attendant, though, is saying to airplane passengers, “Children under 19 may board first because we thank you for your sacrifice of dying in your homes and schools to give men thrills and keep the gun industry profits high.”

This goes way beyond the joke of the Small Penis Gun Club or its Facebook site. Men, it turns out, are actually hardwired by evolution and biology to react to having power over others with a boost in testosterone and an increase in aggression.

A 2006 study published in Psychological Science by Klinesmith, Kasser and McAndrew found that men who simply handled a gun were significantly more likely to give other men a higher dose of hot sauce (a commonly used research measure of aggression) right after handling the gun than were men who handled a child’s toy.

For men who feel that they’ve lost control of their lives, or who feel dismissed or disrespected by others, this is pure catnip.

Firing a gun, in addition to raising testosterone levels like simply handling one does, actually produces a feeling similar to intoxication. As UCLA Law professor Adam Winkler points out, shooting guns triggers higher levels of adrenaline and endorphins, producing a high like riding a roller coaster.

In this regard, guns can be thought of as a drug—an intoxicating, mind-altering, power-conferring drug that leads to aggression and, in the United States, to around 40,000 deaths a year.

Driving a car at high speed can produce a “high” similar to shooting a gun, and large, powerful cars can cause testosterone levels to increase. We already figured out how to deal with this.

In 1920 you could buy and drive a car without a driver’s license in most states. We figured out the downsides of such a libertarian policy, and regulated cars; the result was a rapid reduction in deaths and morbidity.

If, to define a chain of ownership and thus responsibility, a car must be registered with the state annually from the time it’s manufactured to the time it’s destroyed, why not the same for a gun?

If, to make sure the people controlling 2,000 pounds of steel and glass flying down the freeway at 65 mph know what they’re doing, we require a driver’s license—acquired by proving both knowledge and competence—why not the same for a gun owner/user?

If a driver must carry liability insurance because his car could kill somebody, why not a gun owner? Why is it that if the Newtown or Parkland kids had been killed by a drunk or even malicious driver, their survivors would have gotten a million bucks each from Geico, but the families of kids killed with guns don’t?

Required liability insurance, by the way, is the most Republican/conservative of all gun control measures; it’s a “free market solution.”

Just as no insurance company will cheaply write insurance for a driver with a few DWIs, so, too, would they restrict people with domestic violence charges, etc. No government involvement necessary for this one, other than the simple requirement to have the policy so long as one owns a gun.

There are many reasonable ways to reduce gun violence in the United States without outlawing guns. It’s time we started a real conversation about how to enact them.