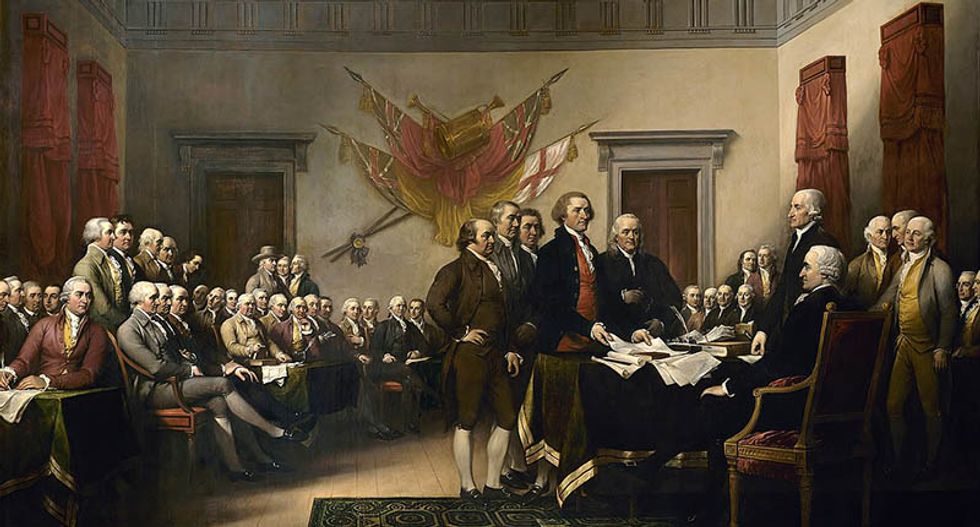 Donald Trump did not invent the art of the political insult but he’s inflamed the level of vitriolic public discourse and incivility to a new low unmatched by other presidents. In a tainted tradition that has permeated our history, other presidents have not been immune to dishing out acerbic insults against one another.

John Quincy Adams was livid that Harvard University planned to award President Andrew Jackson with an honorary degree. He wrote in his diary that Jackson was “a barbarian who could not write a sentence of grammar and hardly could spell his own name.”

Franklin Pierce was not as impressed with Abraham Lincoln as history has been, declaring the day after Lincoln issued the Emancipation Proclamation that the president had “limited ability and narrow intelligence.”

The list of spicy presidential insults goes on and on. While such statements are often laugh-aloud funny, they are also shocking and sobering. How can these men who have reached the pinnacle of political power be so crude and demeaning? We can learn a valuable lesson from the friendship and feud between John Adams and Thomas Jefferson, and their ultimate reconciliation.

In 1775, the 32-year-old Virginia born-and-bred Jefferson traveled from his mountain-top Monticello mansion to the bustling city of Philadelphia to serve as a delegate to the Second Continental Congress.

Sometime in June that year after Jefferson arrived in the City of Brotherly Love, he met for the first time one of the most prominent and outspoken leaders of the resistance to British domination – John Adams. The Massachusetts attorney was the soft-spoken Jefferson’s senior by seven years. But neither their opposite personalities, age differences, or geographical distance separating their homes stood in the way of the start of a remarkable relationship that would span more than a half-century.

They forged a unique and warm partnership, both serving on the committee to draft a declaration of independence from British rule. According to Adams, Jefferson had “the reputation of a masterly pen,” and was therefore tasked with using his writing skills to draft the document. Jefferson was impressed with how Adams so powerfully defended the draft of the document on the floor of the congress, even though he thought Adams was “not graceful, not elegant, not always fluent in his public addresses.”

In the 1780s, they found themselves thrown together once again as diplomats in Europe representing the newly minted United States. These collaborators and their families were friends.

But by 1796, their friendship was obliterated by the rise of political parties with starkly different visions of the new American experiment. With his election that year as the nation’s second president, the Federalist Adams found himself saddled with Jefferson as his vice president representing the Democratic-Republican Party. Tensions were high between the two men.

Just three months after their inauguration as the embryonic nation’s top two elected officials, Jefferson privately groused to a French diplomat that President Adams was “distrustful, obstinate, excessively vain, and takes no counsel from anyone.” Weeks later, Adams spewed out his frustration, writing in a private letter that his vice president had “a mind soured, yet seeking for popularity, and eaten to a honeycomb with ambition, yet weak, confused, uninformed, and ignorant.”

When Jefferson ousted Adams from the presidency in the election of 1800, Adams was forced to pack his bags and vacate the newly constructed Executive Mansion after just a few months. At four o’clock in the morning on March 4, 1801, Jefferson’s inauguration day, the sullen Adams slipped out of the Executive Mansion without fanfare, boarded a public stage and left Washington.  The streets were quiet as the president left the capital under the cover of darkness on his journey back home. He wanted nothing to do with the man who had publicly humiliated him by denying him a second term as president, nor in witnessing Jefferson’s inauguration and moment of triumph.

For the next dozen years these two giants of the American revolution largely avoided one another, still nursing wounds inflicted by the poisonous partisan politics of their era. But on July 15, 1813, Adams made an overture, reaching out to his former friend and foe, writing that “you and I ought not to die until we have explained ourselves to each other.” That letter broke the dam and began a series of remarkable letters between the two men that lasted for more than a dozen years until death claimed them both on the July 4, 1826 – the 50thanniversary of the Declaration of Independence.

Not all such presidential feuds have resulted in such heart-warming reconciliations. But the story of Adams and Jefferson serves as a model of what can happen when respect replaces rancor, friendships triumph over political dogma, and we allow reconciliation to emerge from the ashes of fractured friendships.

Adams and Jefferson ultimately listened to one another, explaining themselves. Listening to someone who thinks differently than we do can feel threatening and scary – almost as if by listening to their thoughts we might become infected by their opinions. So we hunker down and lob snarky tweets to attack the humanity and patriotism of others, foolishly hoping such tactics will convince them to change.

But what would it look like if we could agree on core values we share in common with one another? Patriotism, a safe country, a stable society, economic well-being that promotes health, education, food, and housing, ensuring that people are treated with dignity and respect.

We could then have vigorous and civil debates about the best policies to implement our values. We won’t always agree with everyone. There will be a wide diversity of opinions. But if we could “explain ourselves” to one another, listen deeply, forge friendships, and understand the hopes and fears and humanity of others, we might actually solve some of the problems that seem so intractable in our polarized society – a society that seems to thrive on extremism on both ends of the political spectrum.

Adams and Jefferson ultimately allowed their humanity and deep friendship to triumph over their politics. We can thank them and other candid and often irreverent barbs by our presidents about other presidents, because these insults cause us to reflect how we should treat one another – not only in the public square, but around the family dinner table, in our marriages, and in the workplace.

Our survival as a nation depends on our ability to listen to those with very different political philosophies, to “explain ourselves” to one another, to search for broad areas of agreement with those of different political philosophies, and to reject the acidic politics of personal demonization in which we attack the humanity or patriotism of others.