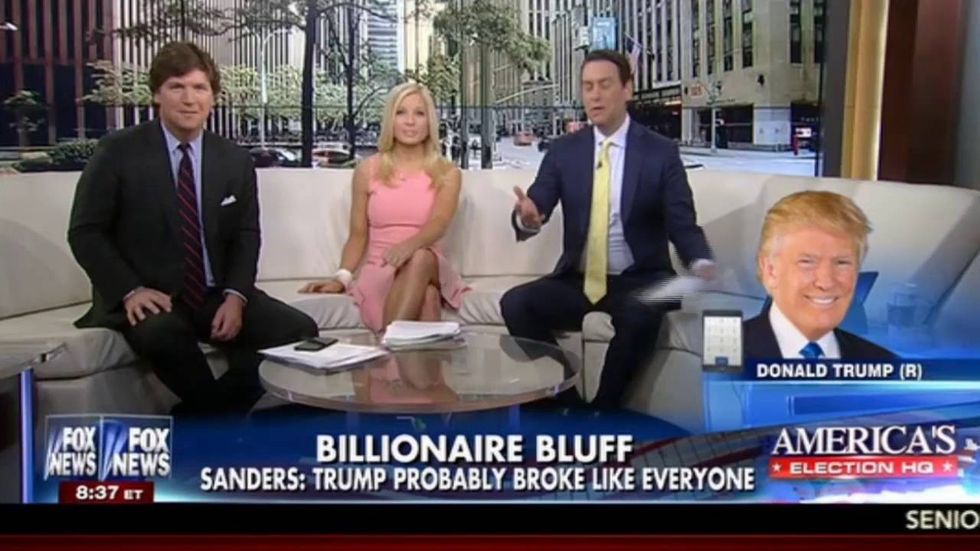 The reviews from the right are in: President Donald Trump took shots at the left-leaning cable network MSNBC after technical difficulties brought the first Democratic presidential debate to a standstill. Meanwhile, the co-hosts of "Fox & Friends" found themselves "scratching their heads" over the decision of three of the candidates on stage who answered multiple questions in Spanish.

"BORING!" Trump wrote in his one-word review on Twitter as the two-hour debate drug on Wednesday night.

Midway through the evening, when audio issues required moderators Chuck Todd and Rachel Maddow to call an early commercial break, Trump added, "@NBCNews and @MSNBC should be ashamed of themselves for having such a horrible technical breakdown in the middle of the debate. Truly unprofessional and only worthy of a FAKE NEWS Organization, which they are!"

The audience was later informed that the microphones of the moderators of the debate's first hour — Lester Holt, Savannah Guthrie and José Díaz-Balart — remained hot after they cleared the stage. "We prepared for everything except for this," Maddow conceded.

In the pre-game for "Fox & Friends," associate producer Carly Shimkus pointed out that Sen. Cory Booker, D-N.J., was the most Googled candidate after the debates Wednesday night, followed by Rep. Tulsi Gabbard, D-Hawaii. In her review, the most memorable moment of the night was Booker's seemingly exasperated eyes toward former Rep. Beto O'Rourke, D-Tex., as the latter spoke Spanish, although Booker himself later answered a question in Spanish. The viral stare instantly became its own meme.

Shimkus' remarks set the stage for the considerable attention paid by the co-hosts of "Fox & Friends" to how Booker, O'Rourke and also former Secretary of Housing and Urban Development Julián Castro answered several questions during the debate in Spanish. (For the record, the debate was also co-sponored by the Spanish-language network Telemundo, for which Díaz-Balart works.)

Co-host Steve Doocy said, "This morning, a lot of people are scratching their heads" about those moments. His colleague Brian Kilmeade criticized O'Rourke for having "quickly pivoted to Spanish," and he thought that Booker's look "said it all."

Later, the co-hosts spoke with Lee Carter from the communications consultancy Maslansky & Partners about how speaking in Spanish could potentially backfire on the Democrats.

"You know, I think what's important for Americans here is that there are 20 Democrats running for president right now," Carter observed. "The Hispanic vote is going to be incredibly important."

Carter also asked, "Did you see the meme of Cory Booker's face when Beto started doing it? I think that was sort of the collective reaction of people watching at home."

Doocy and Kilmeade also criticized Democrats for not using the word "illegal" when referring to undocumented migrants, with the latter saying, "They were talking about the humanitarian crisis on the border."

One candidate who the "Fox & Friends" panelists singled out for praise was former Rep. John Delaney, D-Md., with Kilmeade saying the candidate was there as a "businessman" and was "the only one who actually employs people on that stage." Kilmeade was also impressed with Delaney for saying "Medicare for All" would force hospitals to shut their doors, while Doocy singled him out for positive commentary after he said people were not really interested in impeaching the president.

Rep. Tim Ryan, D-Ohio, was also praised by Kilmeade for alleging Democrats were "elitist" and not connecting with "the forgotten communities that have been left behind for the last 30 years." Town Hall political editor Guy Benson argued that Ryan's statement was helpful to the Democratic Party and could push the party more to the center.

Former House Speaker Newt Gingrich argued that one of the most progressive candidates on the stage had prevailed in terms of public image, saying that "in these kind of debates, which was all chaos, what you need is a good 30- to 45- seconds. And I think Elizabeth Warren was very effective in saying, 'I'll fight for you like I'll fight for my own family.'"

He added, "Beto O'Rourke was probably the big loser, because everyone just decided to beat him up, and there's not much there anyway."