'Everything you need to know': Wall Street abuzz over Biden, Harris and Buttigieg 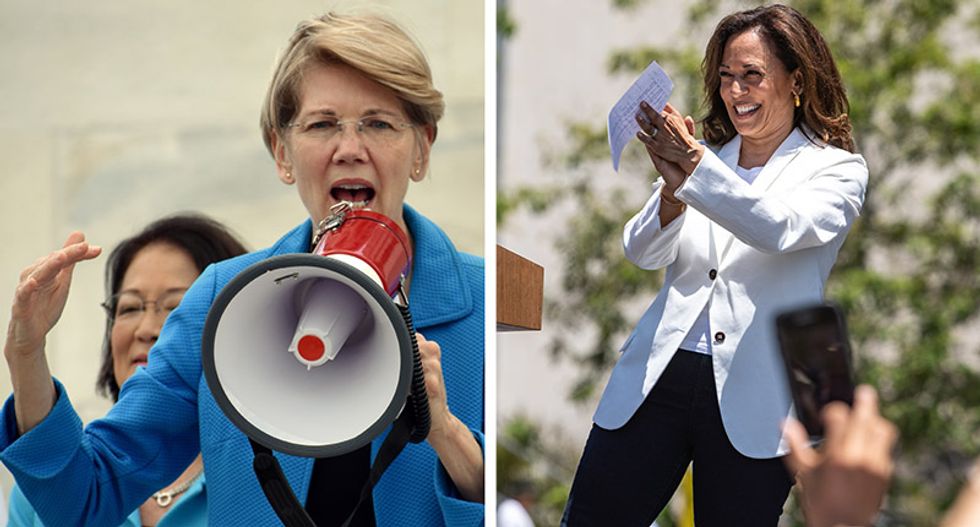 Having already determined that two of the top contenders for the Democratic presidential nomination—Sens. Elizabeth Warren and Bernie Sanders—are completely unacceptable and must be stopped at all costs, Wall Street financiers have reportedly begun to narrow down their list of 2020 favorites as candidates' fundraising efforts reach a "fevered peak" ahead of the June filing deadline.

"[W]hile many are still hedging their bets, those who care most about picking a winner are gravitating toward Mr. Biden and Ms. Harris, while donors are swooning over Mr. Buttigieg enough to open their wallets and bundling networks for him," according to the Times, which interviewed two dozen top fundraisers and political advisers.

"This should tell you everything you need to know," environmentalist and documentary filmmaker Josh Fox tweeted in response to the Times report. Fox has been an outspoken backer of Sanders and done work for his 2020 campaign.

According to the Times, Wall Street donors opening their wallets for the 2020 race are attracted to Biden's "ideological moderation," Buttigieg's "charisma and intellect," and Harris's "potential as a possible primary victor even as she now trails in the polls."

"Those are the three," said Julianna Smoot, who served as national finance director for Barack Obama's 2008 presidential campaign, which raked in an unprecedented sum of Wall Street cash. "If you could roll all three of them into a single candidate, you'd have the perfect candidate."

I suppose Wall Street would be pretty good at knowing when an investment will pay off https://t.co/xPXU8OiauM
— ryan cooper (@ryan cooper)1560718180.0

In a frenzied rush to raise as much money as possible ahead of the June 30 financial filing deadline, "no less than nine Democrats are holding New York fundraisers in a span of nine days," the Times reported.

The Times provided a glimpse of some of the big-money events taking place over the next several days:

Hamilton E. James, the executive vice chairman of Blackstone and a top fundraiser, hosted Mr. Buttigieg at his home on Thursday. The short-selling hedge fund manager James Chanos will hold an event for Mr. Biden on Monday. And on Tuesday, Marc Lasry, the hedge fund manager and co-owner of the Milwaukee Bucks, is gathering checks for Ms. Harris. Co-hosts of that event include Blair W. Effron, an investment bank co-founder and an influential Democratic financier, and Ray McGuire, vice chairman of Citigroup.

Among those spreading the money around is Brad Karp, the chairman of the Paul, Weiss law firm and a top attorney for Wall Street institutions. He is hosting Mr. Biden for a reception at 9 am on Tuesday; he is a co-host for a "lawyer's lunch" for Ms. Harris that same day.

Not all 2020 presidential candidates are taking the same approach to funding their campaign operations.

As Biden, Buttigieg, Harris, and other 2020 contenders race from one big money event to the next, Warren and Sanders—both trenchant critics of Wall Street's political influence—are rejecting lavish fundraisers hosted by corporate executives and instead relying on small-dollar donations and "grassroots" events.

"Two candidates in the top tier of polls, Mr. Sanders and Senator Elizabeth Warren of Massachusetts, have railed against the financial industry," the Times reported, "and opted against the kind of fancy fundraisers with catering and $2,800 admission prices that lubricate the donor industry."

As Common Dreams reported in January, Wall Street bankers made clear how they felt about the possibility of a Warren or Sanders nomination before they even launched their 2020 campaigns.

"It can't be Warren and it can't be Sanders," the CEO of a big bank anonymously told Politico.

While Biden, Buttigieg, and Harris have emerged as early Wall Street favorites, they're not the only candidates who have sparked interest.

David Adelman, an attorney who represents the financial industry, told the Times that he feels a "generational pull" toward Beto O'Rourke.

"It's important to rotate the crops," said Adelman.

Wall Street bankers have also donated to Sens. Kirsten Gillibrand (D-N.Y.) and Cory Booker (D-N.J.), according to the Times.

In response to the new reporting on 2020 Democrats' aggressive Wall Street fundraising push, Astead Wesley—national political reporter with the Times—asked on Twitter, "Why should voters believe they'll reign in big money when big money clearly doesn't?"