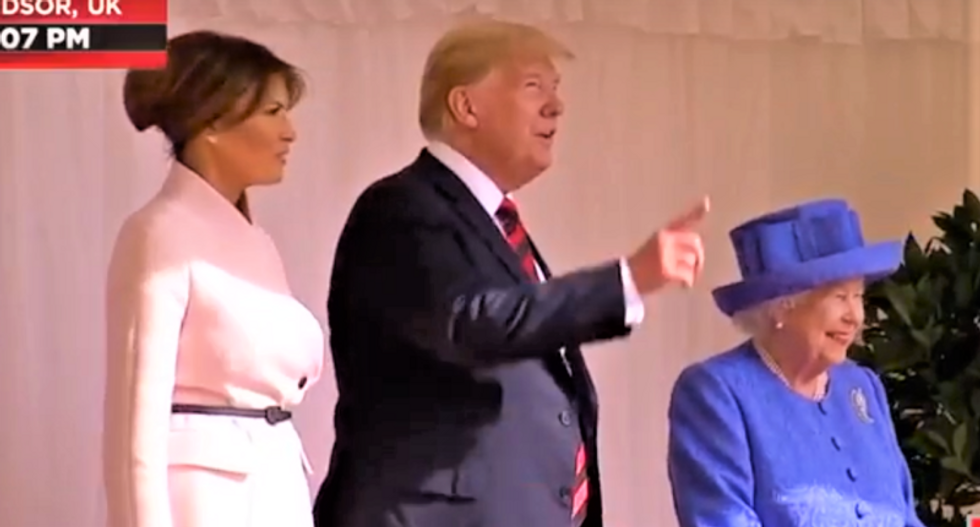 Donald Trump was on his best behavior with the British royal family, give or take a “nasty” used to describe Meghan, the Duchess of Sussex. But it must have been galling to them to host him after Trump’s decades of promoting his business by lying about members of the royal family planning to buy into his properties.

CNN reports that Trump did just that again and again, centering his lies on Prince Charles and Princess Diana. First they were supposedly going to buy an apartment at the not-yet-completed Trump Tower, “unidentified sources” told the New York Post. Buckingham Palace said there was “no truth” to that, but Trump Tower had gotten a burst of publicity around the persistent “rumors.”

A decade later, in 1992, the New York Post was again the source of a “rumor” that it acknowledged was “maybe started by the Trump Organization” that Diana was going to buy a Trump Tower apartment. Buckingham Palace again denied the rumors. But Trump wasn’t done.

Talking to Howard Stern in 1993, he claimed that Diana was looking at an apartment in the building, and, because we’re talking about a conversation between Donald Trump and Howard Stern, he went further. “I hope she's looking at—She is really hot. She has gained 20-25 pounds, she looks great," Trump said. "There could be a love interest. I'd become King of England. King of England. I'd have to leave, I'd have to lose the New York accent quickly. See they wouldn't like my accent over there.” The claim resurfaced—in the New York Post again—in 1994, leading a royal family spokesperson to ramp up the tone in shooting it down, saying “This report is highly speculative rubbish. It is simply not true.”

But months later, the Trump Organization was back at it, this time using Charles and Diana to promote Mar-a-Lago rather than Trump Tower. Multiple news outlets reported that the two, who were still married but whose relationship had broken down by that point, had separately joined the club, with Mar-a-Lago’s membership director and Trump telling that lie to the press. “It's complete nonsense,” Buckingham Palace responded. Trump’s employees stood by the story until an even stronger statement from Buckingham Palace, saying “This story was concocted by Mr. Trump to secure publicity for his club. It is a matter of regret that he feels he can use the names of the members of the royal family to do so.” Only at that point did Trump concede that maybe he had just offered them honorary memberships.

Trump’s lies about members of the royal family, then, drew a “no truth,” a “highly speculative rubbish” and a “simply not true,” a “complete nonsense,” and a direct accusation that a story “was concocted by Mr. Trump to secure publicity for his club,” which was “a matter of regret.” It must have been really, really fun for them to host him and his entire family and see the Trump offspring frantically Instagramming the whole experience, again using the British royals to promote the Trump name.