Why do people join extremist organizations? 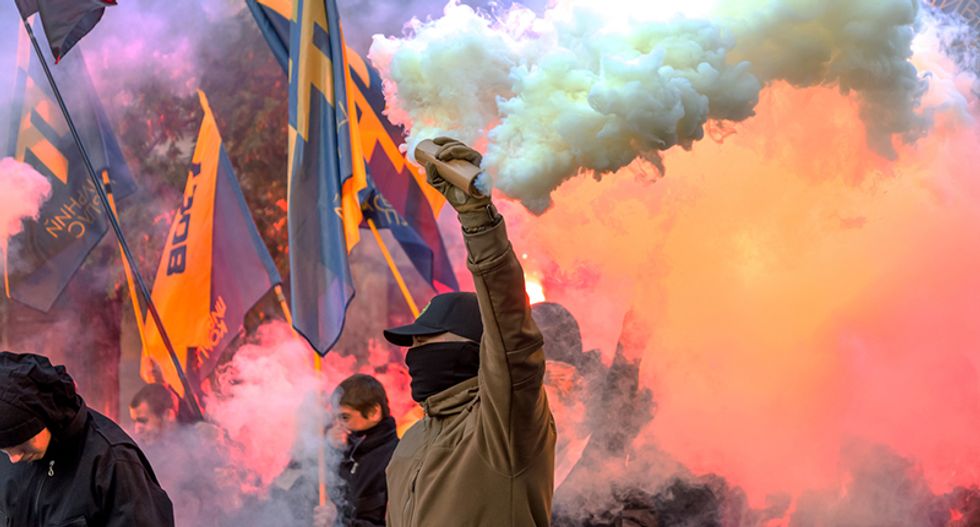 Royalty-free stock photo ID: 327621782 Odessa, Ukraine - October 14, 2015: Torchlight procession of radical extremists of left parties is accompanied by riots. Protesters, demonstrators carried a Nazi flag, burn fireworks and smoke bombs.
B.E. Khasru
,
History News Network
and
B.E. Khasru
May 21, 2019
Analysis of similar events in Europe, Africa, and Asia reaches contradictory conclusions. A paper on “Radicalisation and al-Shabaab recruitment in Somalia” found that people joined extremists organizations “for economic benefits.” In fact, the authors write, research from “Somalia showed that 27 percent of respondents joined al Shabab for economic reasons, 15 percent mentioned religious reasons, and 13 percent were forced to join.”
Meanwhile, a World Bank study based on leaked Islamic State records indicated no link between poverty or educational levels and radicalization. A joint study by Northwestern University and the Hebrew University concurred. “Poor economic conditions do not drive participation in ISIS,” the authors found. In fact, many of them came from wealthy countries with low inequality. Instead, the study concluded, “the flow of foreign fighters to ISIS is driven not by economic or political conditions but rather by ideology and the difficulty of assimilation into homogeneous Western countries.”
In Sri Lanka, too, the extremists weren’t poor people in search of economic improvement. Two were members of a very wealthy family that is involved in copper mining and spice trade. Their father founded Colombo-based Ishana Exports, which is largest exporter of spices from the island nation. Another of the bombers had studied in England and was a graduate student in Australia before returning to Sri Lanka. According to the Sri Lankan government, most of the attackers were similarly well-educated and had come from “middle-or upper middle-class” families.
Assimilation no factor in radicalization
Yet assimilation problems can’t fully explain the attacks either. Of Sri Lanka’s 22 million people, 70 percent are Buddhist, 13 percent Hindu, 10 percent Muslim, and 7 percent Christian. The groups have been living together at least 1,000 years, and religious schisms have only turned violent—with bad blood between Buddhists and Muslims, but not between Christians and Muslims.
To be sure, there are grievances. In Bangladesh, for example, professor Zia Rahman, chairman of the criminology department at Dhaka University, suspects that the rise of extremism resulted from a conflict in internal politics, especially the trial war criminals who opposed Bangladesh's independence. But Monirul Islam, counter-terrorism chief, says local militants are inspired by global militant activities.
Those are compounded by a sense that, around the world, Muslims face injustice. Many young people believe that the West has been suppressing Muslims for centuries: The current fighting in Syria, Iraq and Libya is against Muslims by Muslims, but there is a widespread perception that behind this mayhem is a Western conspiracy to weaken Islam.
Many people also believe that America, especially, works against Muslims because of Israel. No other issue riles up Muslims as much as Palestine. Pakistan's founder, Mohammad Ali Jinnah, warned President Truman in 1947 about this danger, and urged him not to divide Palestine. Muslims cannot fathom why Christians support Israel, since Jews do not honor Jesus, where as Muslims hold him in high regard as one of God’s prophets.
“A feeling of marginalization as a greater community of Islamic Ummah is encouraging even socially affluent people to get involved in ‘Jihad,' ”noted a study by the Bangladesh Institute of Peace and Security Studies.
Meanwhile, a study conducted by Anneli Botha at the Institute for Security Studies in South Africa found that 87 percent of the respondents cited religion as the reason they joined al Shabab. The extremists deploy the banner of religion to lure followers, as radical leftists once used communism. Religion promises the Muslim youth power and prosperity — as Marxism guaranteed freedom from exploitation. Islam offers another reward that makes it a uniquely potent force — heaven after death.
Islamic extremists resemble communists
Educated and wealthy youths join radical movements — be it Islam or communism — because of their desire to create an ideal world. Muslim youths become suicide bombers because they think they are doing their part to make this world a better place. They turn to Islam because there is no other progressive ideology available to them.
This dynamic is longstanding. After all, many communist leaders belonged to the upper class, too, and were highly educated. W. E. B. Du Bois, Ho Chi Minh, and Che Guevara are just a few examples. They were all driven by an understanding that society was leaving some people behind, an earnest desire to end social injustice, and the means to do something about it.
In Bangladesh, hammer and sickle graffiti was ubiquitous in the 1970s—painted by students in their teens and early 20s who fancied themselves romantic revolutionaries. They came from the upper echelon of society, but they thought of themselves as the saviors of their fellow hapless countrymen.
Right or wrong, many Islamic extremists hold similar views; they tend to believe they are on the right side of the equation. Muslims do not want to destroy the West, as the myth goes on in Europe and America, even through many of them consider it unfair and unjust. Yet, they refuse to be insulted by the West, and wish to be as wealthy as Americans, if not more. Above all, they want a seat at the table of equals. Until this happens, Islam and the West will remain mired in sporadic fights.
Accommodation—not confrontation—is the solution. Protestants and Catholics had to accommodate each other to end the Thirty Years' War, one of the most destructive conflicts in human history.

B.Z. Khasru's new book, "One Eleven, Minus Two: Prime Minister Hasina's War on Yunus and America," will be published soon. He previously authored: "Bangladesh Liberation War: How India, U.S, China and the USSR Shaped the Outcome,” and “The Bangladesh Military Coup and the CIA Link."