What Aristotle and John Locke said about political liberalism 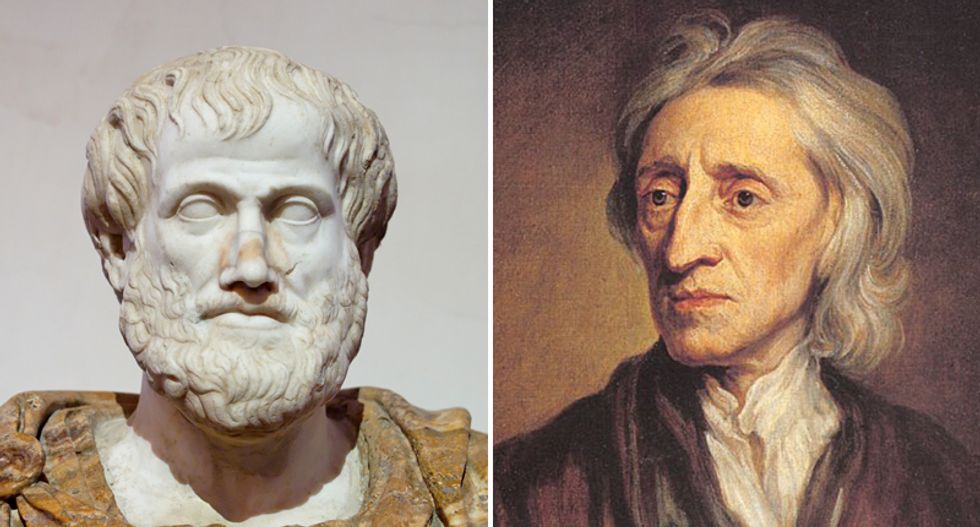 This diary is part of my series Philosophy Matters, which examines the ideas of some important philosophers and their relevance to politics. You can find the other parts by searching the #PhilosophyMatters hashtag on DK.

One of the most influential thinkers of all time, the ancient Greek philosopher Aristotle possessed a wide-ranging and insatiable curiosity. Most of his philosophy is what we would now call science: he wrote on biology, astronomy, zoology, physics, and psychology, to name just a few subjects. He also made important contributions to ethics and political theory. Unfortunately, the only works by Aristotle that have survived appear to be his lecture notes.

The 17th-century English philosopher John Locke was a pioneering political thinker. He had a major influence on the U.S. Founding Fathers and provided the philosophical justification for the American Revolution.

Aristotle on the goal of politics

According to Aristotle, the goal of human life is eudaimonia. The Greek word eudaimonia is often translated as “happiness,” but a better translation might be “success”—not success at a particular activity but success at life. For Aristotle, eudaimonia means putting intellectual and moral excellence into action over a lifetime.

For Aristotle, the success of a person’s friends, family, and fellow-citizens is part of the person’s success. I don't just mean that a person needs help from others to be successful. We might say that Aristotle thinks of society as a team. Just as a person can win at baseball only by winning along with their baseball team, so a person can win at life only by winning along with their society. In fact, in the Nicomachean Ethics, Aristotle says that even after a person has died, the success or failure of their friends and family continues to affect how successful their life was (though Aristotle adds that this effect will not be enough to make a successful person unsuccessful).

Because he thinks that society’s success and individual success are inseparable, Aristotle says that society has an interest in ensuring that individuals are living intellectually and morally excellent lives. In fact, Aristotle thinks that making citizens excellent—not protecting them or providing for their material needs—is the main purpose of politics. As he puts it,

legislators make the citizens good by forming habits in them, and this is the wish of every legislator, and those who do not effect it miss their mark, and it is in this that a good constitution differs from a bad one. (Nicomachean Ethics 2.1)

Aristotle views humans as essentially social. As we have seen, he thinks that the individual and society are so closely connected that society’s success or failure can affect the individual’s success. This link extends even across death: even a dead person’s success continues to be affected by the success and failure of others. Hence, Aristotle thinks that society has a vital interest in ensuring that its members are excellent.

By contrast, Locke views humans as essentially individuals. Individuals, while remaining fundamentally individual, agree to form a society in order to protect their individual interests. On this way of viewing things, the government’s role is to protect individual life and liberty.

In its purest form, political liberalism says that only individuals are real (to quote Margaret Thatcher, “there are no societies”) and draws a sharp distinction between justice and value. Individuals can have private opinions about what is valuable, but pure political liberalism would see those opinions as irrelevant to what is just on a societal level: the purpose of society is to protect individuals, not to promote good values.

Political liberalism has played a vital role in breaking down traditional hierarchies and defending human freedom. At the same time, many left-wing and some right-wing thinkers have accused political liberalism of undermining community and encouraging selfish individualism. As rates of loneliness and depression increase, I suspect that this criticism will become increasingly common.

Aristotle and Locke have a part to play in discussions about political liberalism. Even if we don’t completely agree with either of them about human nature and the purpose of politics, their theories can serve as a starting-point for thinking about the proper role of society and government.