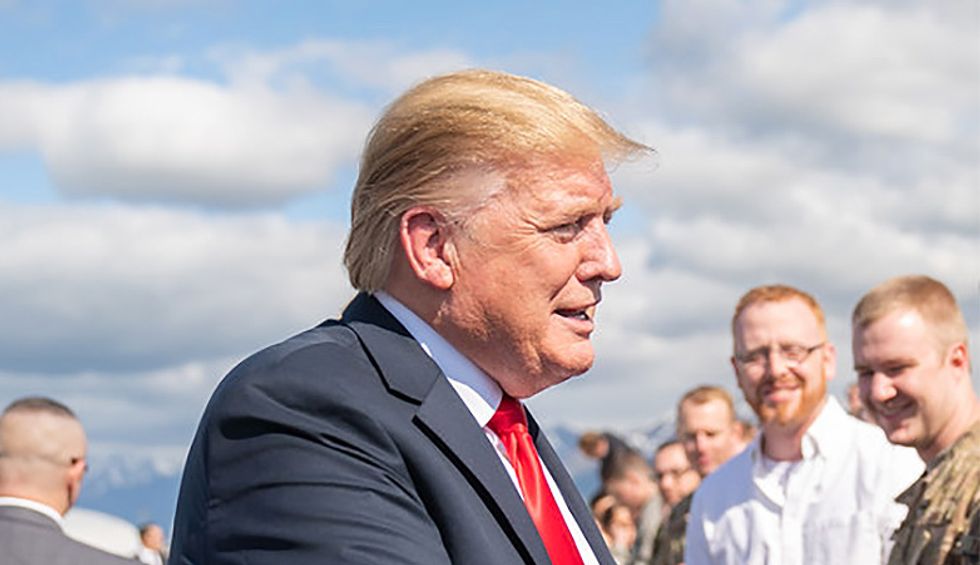 Donald Trump is thoughtless, graceless, ignorant, and racist when he’s on his home turf. It should surprise no one that he exhibits all those properties when he is a guest in someone else’s home. But it’s still shocking to see the extent to which Trump is willing to parade his ignorance, deny the advice of his own staff, and insult his hosts to their face.

While wishing the troops “Happy Memorial Day,” Trump apparently enjoyed all the pomp and circumstance of his Japan visit. He ate a traditional meal of a double cheeseburger, made up a “president’s cup” trophy for sumo wrestling, and got to meet the emperor. Then he used his time in Japan to undercut the prime minister, praise North Korean dictator Kim Jong Un, and explain to everyone in Japan how it was totally okay that missiles were once again being fired out to sea in their direction.

The Washington Post reports that Trump declared that he wasn’t “personally” concerned about renewed missile tests by North Korea, praised Kim as “a very smart man,” and chuckled over remarks that Kim supposedly made concerning Vice President Joe Biden. Trump then went on to tweet the statements from Kim and to insult Biden’s intelligence—while misspelling his name.

According to The New York Times, Trump seemed to treat most of the state visit as “executive time,” frequently turning to Twitter to fling insults and using speech opportunities to attack Biden and others, even when that meant making statements that went against the advice of his own advisers. Throughout the four-day visit, Trump was “never fully present,” instead seething over perceived insults back in the U.S. and looking for ways to turn every event into an opportunity to jab at opponents.

Traditionally — and for very good reasons — officials traveling on behalf of the United States present a united front. Domestic disagreements are not discussed, and personal politics are put away in order to present a picture of a U.S. that may have arguments at home, but sets those fights aside when looking outward. But Trump has demonstrated again and again that he has no use for or understanding of tradition. And at least there was this much: The image Trump presented of a man who was more than willing to upend alliances and wreck the delicate balance of foreign policy for a perceived momentary score over a political rival was something he rarely offers: the truth.

Trump was given what the Japanese regarded as a singular honor by being the first foreign official to meet with the nation’s new emperor. But on the way to that meeting, Trump spent his time tweeting about the Mueller report and attacking ongoing investigations by Congress.

Multiple times during the visit, Trump used both Twitter and speeches to attack Biden. Trump clearly relished the statements by Kim, repeating them and declaring the dictator a “very smart man.” That he was praising Kim while standing next to people whose country had been overflown repeatedly by North Korean missiles didn’t seem to bother Trump one bit.

As usual, Trump displayed his lack of understanding about all things having to do with trade, insisting that the trade deficit with Japan represented a failure on the part of past administrations, and stating that it would be “straightened out rapidly.” As CNBC reported, Trump declared that there would be an announcement on trade by August, but Japan’s economic minster made it clear that no such deal was in the works and that no one should be expecting an announcement in the next few months.

Fresh from presenting his invented sumo trophy, Trump turned the “ceremony” of handing over the trophy into an opportunity to unleash Fox News quotes and demand that the media “apologize to Trump” for reporting on the Russia investigation. There definitely were a lot of apologies due, but none of them should have been directed to Trump.