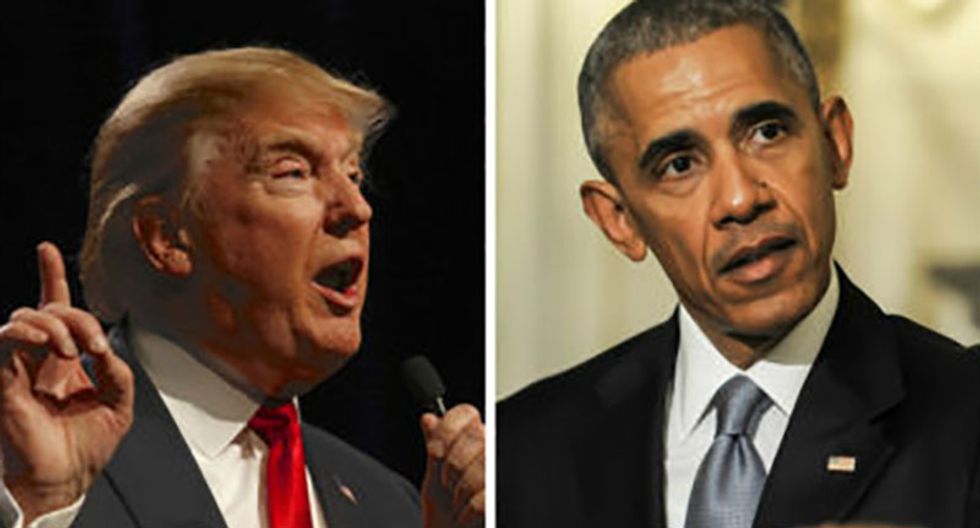 Donald Trump predicted that an American president would launch a war with Iran in a "desperate" attempt to win reelection—he just didn't think it would be him.

As Trump and the hawks in his cabinet dangerously escalate military tensions with Iran ahead of the 2020 election, Twitter users and media outlets have uncovered a slew of old Trump tweets warning that former President Barack Obama would "attack Iran" to boost his electoral prospects.

"Barack Obama will attack Iran in the not too distant future because it will help him win the election," Trump tweeted on November 14, 2011—a prediction he echoed nearly a dozen times between 2011 and 2012.

Of course, rather than starting a war, Obama was aiming to establish the historic Iran nuclear deal—an arrangement which Trump has always hated, vocally disapproved of, and eventually pulled the U.S. out of.

Now, in 2019, as he begins his own campaign to secure re-election, it's Trump's own administration that has been ramping up tensions with Iran.

As tensions between the U.S. and Iran soar due to White House warmongering, some have expressed concern that—with the 2020 election 17 months away—Trump is planning to deploy the reelection strategy he repeatedly warned about less than a decade ago.

"Why go hard after Iran right now? Does Iran or one of its proxies in the Middle East pose a real threat to American interests? Or, perhaps, the real reason is that next year is an election year?" asked John Dederer, member of Disabled American Veterans, last week in a New York Times letter to the editor.

The letter was published in the Times just a day after Trump national security adviser John Bolton threatened Iran with "unrelenting force" in a statement on the routine deployment of a U.S. aircraft carrier and bomber task force to the Persian Gulf.

"Sending an aircraft carrier group to threaten retaliation against any Iranian-sponsored aggression, real or imagined, is no slam-dunk foreign policy decision," Dederer wrote. "Rather, it is a cynical re-election ploy with no regard for cost in American blood. Shame!"