This right-wing senator just said the U.S. could quickly 'win' a war against Iran with 'two strikes' 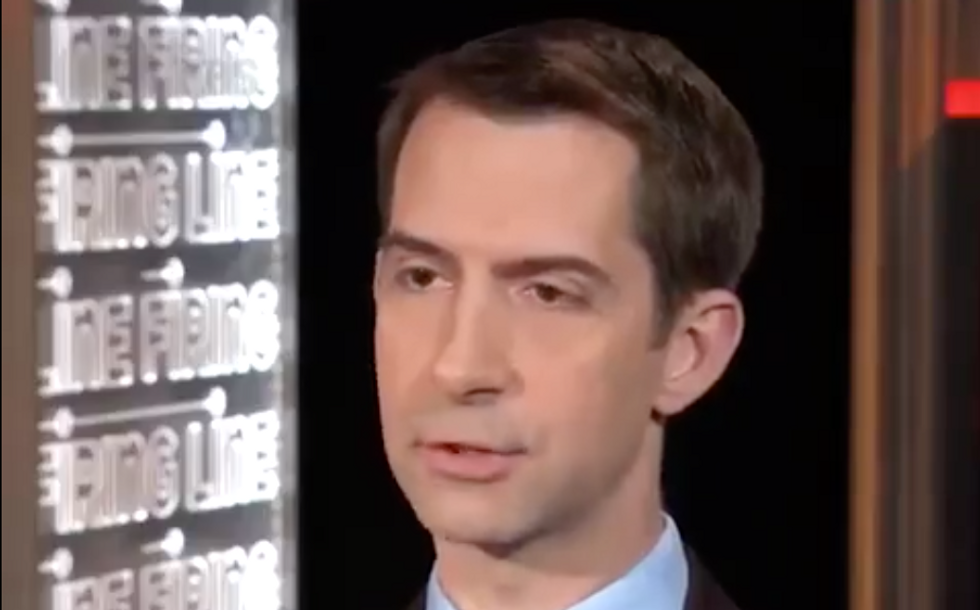 In a new interview with Firing Line's Margaret Hoover, GOP Sen. Tom Cotton of Arkansas expressed naive confidence about the prospect of war with Iran — a prospect that President Donald Trump's top advisers seem intent on driving the country toward.

"Could we win a war with Iran?" asked Hoover.

"That didn't take you a second," she said.

Democratic Sen. Tim Kaine of Virginia, on the other hand, had a much more realistic idea of what's at stake in a possible war on Twitter: "Trump thinks our troops are toy soldiers he can just move around—but these are real men and women whose lives are at stake. Many are in my state. I've got a kid in the military. And I will do anything I can to stop this President from getting us into a war we should not be in."

He similarly compared the rush to war with the George W. Bush administration's disastrous bumbling into Iraq. And that's much closer to how Americans should think about the prospect of an Iran war — a duplication of the Iraq war. That didn't end when the U.S. took out Saddam Hussein, because it threw the country into turmoil. We were responsible for that chaos, and American leaders felt we would be at risk if they allowed the disaster to worsen. So we stayed, and American soldiers are still in Iraq 16 years later. In the meantime, hundreds of thousands — if not more — were killed as a result of the conflict.

That's what Americans should expect if Trump brings us to war with Iran. And to be fair to Cotton, the interview suggests he's not hoping for that outcome. He didn't outright call for regime change, though he called on the regime to change its actions.

It's a good point, but one of those choices is underestimating the cost and the difficulty of war — and having a poorly defined sense of what "winning" would mean at all. And on that front, Cotton's reckless assertion that a war could be won with "two strikes" only increases the likelihood of a conflict.