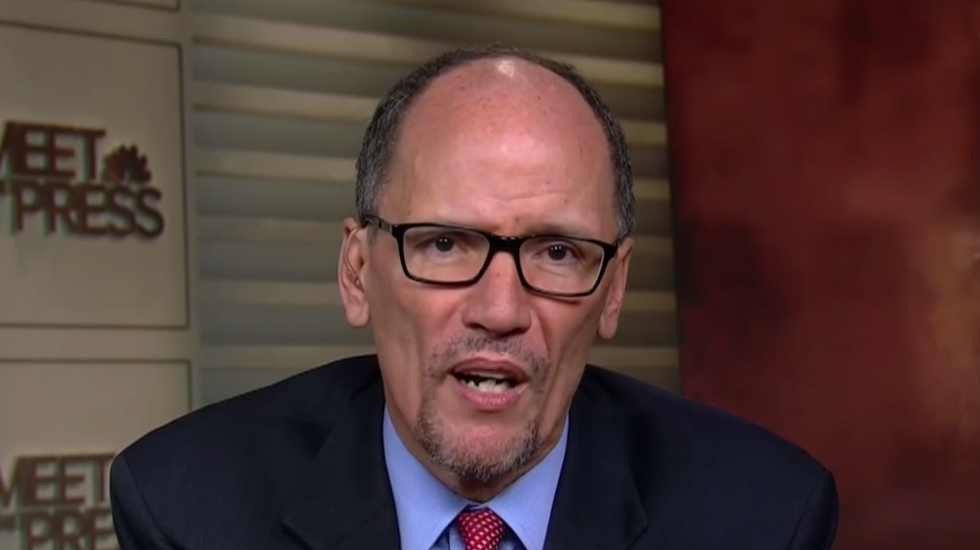 Democratic National Committee Chair Tom Perez does not have an easy job on his hands. With 23 candidates already declared in the 2020 primaries, the party will struggle to run a thoughtful, fair, and transparent process that gives each contender the consideration they believe they deserve.

And on Friday, Perez announced a decision that is guaranteed to rankle some candidates — and it's already looking to be a confusing mess.

Perez told The Hill that the committee will hold a lottery to determine which candidates will be on that stage for each of the two nights scheduled for the first primary debates. Each night will have 10 candidates, and he says he wants to determine randomly which people will appear first and second.

"We wanted to make sure we didn’t have our thumb on the scale,” Perez said. It's an understandable and admirable attitude, especially given that the DNC faced extensive accusations of bias during the 2016 primary.

But when Perez elaborated on his concerns, the plan became less clear.

“I don’t want people thinking that night one is the varsity event and night two is the JV, or vice versa,” he said. “We’re going to make sure that we mix it up.”

This is a reference to the Republicans 2016 debates, which were also bogged down by an excess of candidates. The RNC used polling to rank each candidate in the race, and it had the lower ranked candidates compete in a lower profile debate held separately from the larger group with higher polling.

But the idea of "mixing" up the debates actually contrasts with the idea of a "lottery" that Perez is floating. (He said the details haven't been worked out yet.)

Precisely because a lottery would be random, the outcome may well result in an uneven distribution of strong candidates across the two nights. It's perfectly possible, then, that, say, Joe Biden, who leads the field in polling, could end up on stage with California Rep. Eric Swalwell, New York Sen. Kirsten Gillibrand, and Massachusetts Rep. Seth Moulton. Meanwhile all the other candidates with a larger national profile thus far — Sen. Bernie Sanders, Sen. Elizabeth Warren, Sen. Kamala Harris, Beto O'Rourke, and Mayor Pete Buttigieg — could end up in the other debate. In this sense, the outcome wouldn't be that the debates were "mixed up," but quite uneven in terms of featuring the most prominent candidates.

With this kind of outcome, Biden might be peeved at being pitted against significantly lower ranked competitors. Or Sanders, Warren, and Harris might be annoyed that they don't have the chance to go after Biden early on to stand apart, while someone like Ohio Rep. Tim Ryan might get a chance to gain new prominence by incisively cutting down the former vice president.

Alternatively, if Biden, Harris, Warren and Buttigieg all end up on the same debate night, people might come to think of that as the "real" debate, with the other formidable contenders receiving less attention. And no matter what Perez says, some voters will convince themselves there was nothing "random" about the process.

There are other controversies likely to arise, too. While the DNC has set a cap for the first debates at 20 candidates — 10 on each night — it also has a separate criteria for who can participate.

"Candidates must receive donations from 65,000 unique donors in at least 20 states or reach 1 percent support in three sanctioned polls to qualify for the first two debates in June and July," The Hill explained. So if more than 20 candidates meet these qualifications, some will be nixed.

"Most of the candidates appear to have reached the fundraising or polling thresholds, making it likely that Perez will have to turn to tiebreakers to determine the top 20," the article continued. "The unlucky 21st candidate could potentially miss the debate stage by a dozen small-dollar donors or a fraction of a percentage point in the polls."

This, of course, just replicates the problems that Perez said he wanted to avoid by having separate "varsity" and "JV" debates.

Will any of this matter in the end? It's impossible to say. Perhaps Biden's lead will stay strong throughout the primary and will hardly waver. Perhaps someone else is destined to shoot past him. Campaigns are just made of moments, and a debate can create the opportunity for the right movement to take off. But there are also broader forces at work, and it's difficult to predict how big a role the debates will or even could play.

And with 23 — and potentially more — candidates competing, it's going to be a steep challenge to give everyone the feeling that they've been treated fairly. There are sure to be plenty of contentious fights ahead.