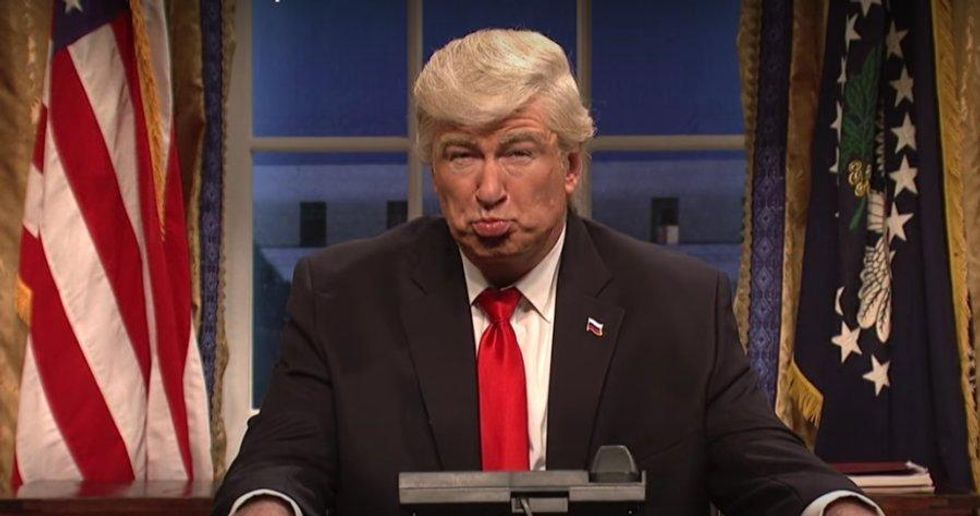 Donald Trump is the first president of the United States who is openly angry and traumatized over the portrayal of him on NBC’s long-running “Saturday Night Live.” Whenever Alec Baldwin lampoons him on “SNL,” it’s a safe bet that Trump will be ranting and raving about it on Twitter. But politicians, as a rule, have had a sense of humor about the way they are lampooned on the 44-year-old sketch comedy program — and the show’s influence is so strong that in a recent interview, President George W. Bush revealed that for around 17 years, he thought he really did say “strategery.”

President George W. Bush didn’t actually say “strategery” in real life, but former “SNL” cast member Will Ferrell used that made-up “word” in one of his hilarious portrayals of him. Although it was pure satire, Bush assumed that he actually said that — until “SNL” creator Lorne Michaels set him straight.

In a Q&A interview this month with the Waco Tribune-Herald, George W. Bush explains, “For 17 years, I thought I said the word ‘strategery.’ Occasionally, I would get my words mixed up; they call it a malapropism. So Laura (Bush) and I took Lorne Michaels, the head of ‘Saturday Night Live,’ to dinner — and at one point, he said, ‘We created the word strategery.’ I said, “No, you didn’t. I said it.’ And he said, “No, no. One of our great speechwriters came up with the word, and we basically stuck it on you.’”

For nearly 20 years, George W Bush thought that he had actually once said "strategery" rather than SNL having made… https://t.co/XDeeRr1N2f
— Aman Batheja (@Aman Batheja) 1559327255

Bush continued, “I said, ‘You’ve got to be kidding me. Lorne, for all these years, I thought I said ‘strategery,’ and you’re telling me I didn’t?’ He said, ‘That’s right.’”

The influence of “SNL” can be found in the George W. Bush Presidential Center, which has a podcast called The Strategerist. The younger Bush, in his Waco Tribune-Herald interview, asserted, “I’m honored the malaprop, that evidently I didn’t come up with, is a part of the Bush Center.”

Bush, unlike Trump, was never offended by the way he was depicted on “SNL.” Nor was his Republican father, the late President George H.W. Bush, who was famously lampooned by Dana Carvey on “SNL” in the late 1980s and early 1990s. In fact, Carvey’s caricature of the older Bush led to Carvey developing a friendship with the Bush family — including both Bush presidents, former First Lady Barbara Bush, former First Lady Laura Bush and former Florida Gov. Jeb Bush.

Another example of “SNL”’s influence is Tina Fey’s portrayal of 2008 vice presidential candidate and former Alaska Gov. Sarah Palin. When Fey, in her iconic caricature of Palin, said, “I can see Russia from my house,” that line became a part of pop culture.

The first president to be lampooned on “SNL” was the late Republican Gerald R. Ford, who was in office when the show debuted 44 years ago in 1975. Ford was famously caricatured by Chevy Chase, who portrayed him as a klutz who would leave the Oval Office in shambles. In real life, Ford had been an accomplished athlete in his younger days. But Chase’s portrayal was so famous that the klutz stereotype stuck in pop culture.

Rather than being offended by Chase the way Trump is offended by Baldwin, Ford embraced Chase’s portrayal and laughed about it. Chase and President Ford appeared alongside one another at the 1976 White House Correspondent’s Dinner, and Ford famously declared, “I’m Gerald Ford, and you’re not” (which was a play on Chase’s trademark line, “I’m Chevy Chase, and you’re not”).

Trump, hoping to derail Joe Biden’s presidential hopes for 2020, has been calling the former vice president “Sleepy Joe” — an effort to convince voters that Biden is tired, worn out, over-the-hill and lethargic. But in his goofy portrayal of Biden on “SNL” during the Barack Obama years, former cast member Jason Sudeikis depicted him as the opposite of lethargic and as sometimes having too much energy for his own good. And if Sudeikis returns to “SNL” enough times in 2019 with his over-the-top Biden impression, it would probably do a lot to counter Trump’s “Sleepy Joe” claims. Biden wasn’t offended by the caricature: when he saw Sudeikis’ wacky impression of him, he had a big smile on his face and seemed genuinely amused by it.

If Biden does ultimately receive the 2020 Democratic presidential nomination, the best thing that could happen to his campaign would probably be for the former VP to walk onstage when Sudeikis is lampooning him on “SNL” and declare, “I’m Joe Biden, and you’re not. And live from New York, it’s ‘Saturday Night.’”