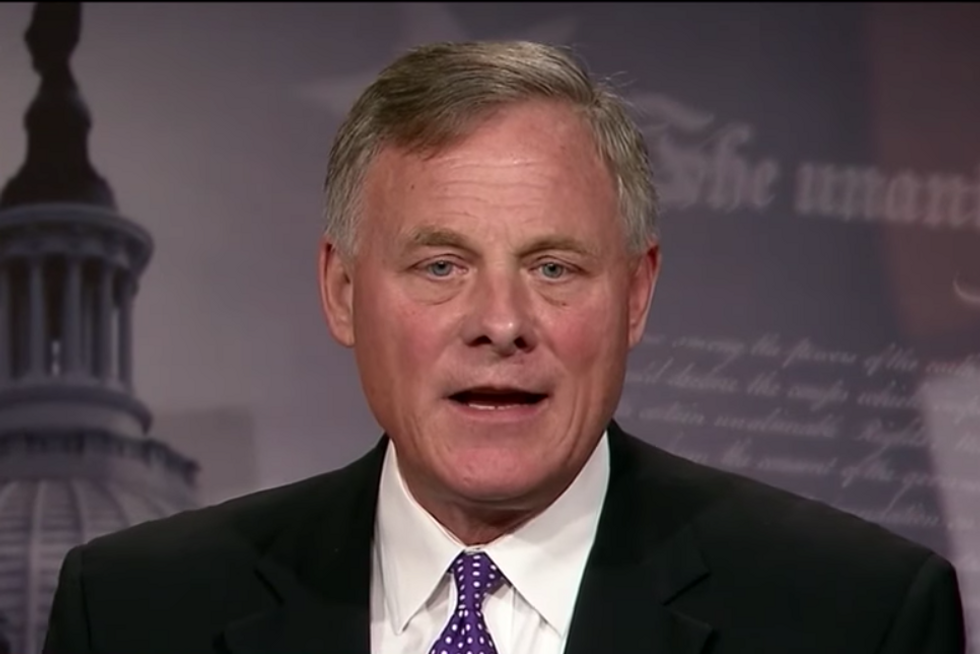 North Carolina Sen. Richard Burr is taking criticism from his fellow Republicans Wednesday after multiple outlets reported that the panel he leads — the Senate Intelligence Committee — has taken off the kid glove around President Donald Trump's family.

In particular, the committee has subpoenaed Donald Trump Jr. to testify before his committee about some of the events detailed in Special Counsel Robert Mueller's report.

It was a bold salvo for a Republican-led committee to attempt to force a member of Trump's family to testify. CNN reported that Trump Jr. is considering taking the Fifth or simply not showing up to the committee.

Axios noted that the subpoena is a "sign that the Russia investigations in Congress aren't over despite the conclusion of special counsel Robert Mueller's probe and despite Senate Majority Leader Mitch McConnell saying it's time to move on from the Russia probe."

And when news of the subpoena broke, many of Burr's colleagues were not happy.

House Minority Leader Kevin McCarthy tweeted that Trump Jr. "has already spent dozens of hours testifying in front of Congressional committees. Endless investigations—by either party—won't change the fact that there was NO collusion. It's time to move on. It’s time to focus on ISSUES, not investigations."

"Apparently the Republican chair of the Senate Intel Committee didn’t get the memo from the Majority Leader that this case was closed..." tweeted Sen. Rand Paul (R-KY).

An anonymous source close to Trump Jr. told the Wall Street Journal that the subpoena was "an obvious PR stunt from a so-called 'Republican.'"

While the Senate Intelligence Committee has a better reputation for decency and bipartisanship than the factious House Intelligence Committee, Burr's history in this matter is checkered. According to Mueller, Burr appears to have handed over a list of people being investigated in the Russia probe to the White House after receiving a confidential briefing. Ryan Goodman at Just Security has argued that his closeness to the president — Burr was a member of Trump's campaign — makes him an unreliable figure. It's possible he's using this opportunity to regain some of the credibility he's lost, though it is coming at the cost of criticism from his own side.