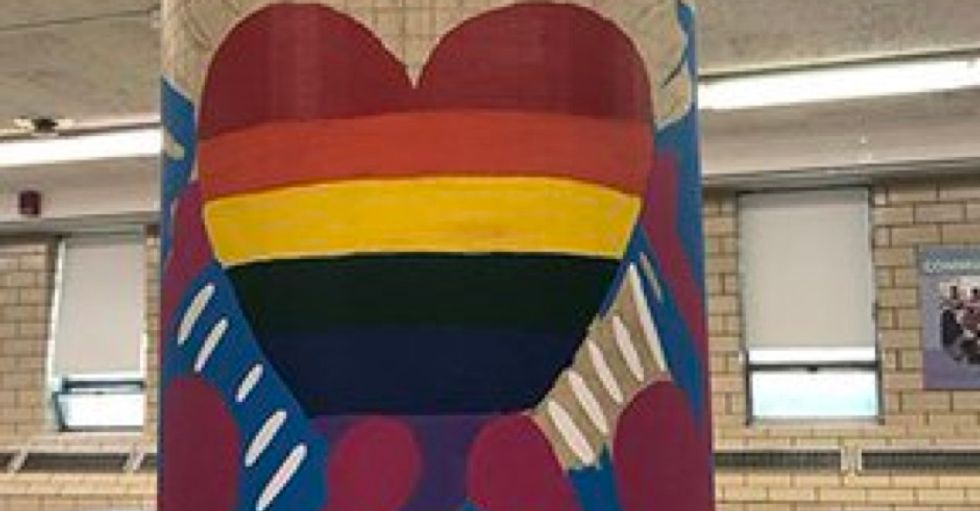 Image via Screengrab.
David Badash
and
The New Civil Rights Movement
May 27, 2019

A New Jersey taxpayer-funded public charter school run by a private non-profit organization has the Catholic Church for its landlord. Last week administrators at the Bergen Arts and Science Charter School had a portion of an LGBT-supportive mural, created by a 16-year old junior at the school, painted over because Rev. Paul Prevosto, the pastor of Holy Trinity Church which happens to be the school's landlord, said parishioners complained that the mural was "offensive."

The mural "showed abstract figures with interlocking circle and arrow symbols that represent the male gender," and "a rainbow heart," according to NorthJersey.com. (One portion of the mural can be seen below.)

The artist, who does not want to be named, says the "school is infringing on my rights just as much as the church now,” and added: “A public school is complicit in discrimination.”

A state-wide LGBTQ organization is speaking out.

“It is offensive, unconscionable, and flatly unconstitutional for this church acting as a for-profit landlord to restrict a public school’s curriculum or censor student speech within those walls,” Garden State Equality Executive Director Christian Fuscarino in a statement. “This type of hate-fueled bigotry is precisely why New Jersey needs LGBTQ-inclusive curriculum to promote acceptance and understanding.”

A school psychologist was also allegedly required by the church to remove a poster that offered support for the school's LGBTQ students.

The Archdiocese of Newark issued a press release claiming it had told the school to "remove some content in a new painting, which included some symbols of sexuality that were inappropriate for the building, as the building is utilized by parishioners of the Church, as well as the School."

Absent from multiple news reports appears to be the question of why a public school is being housed in a building owned by a church, especially when that building is also "utilized by parishioners of the Church," and when its lease dictates that the school not do anything that would violate "Catholic moral values, ethics and faith."

NCRM will not publish anything that could reveal the artist's identity, but Garden State Equality tweeted before and after photos of one portion of the mural that was painted over.

There are other portions that were also destroyed.