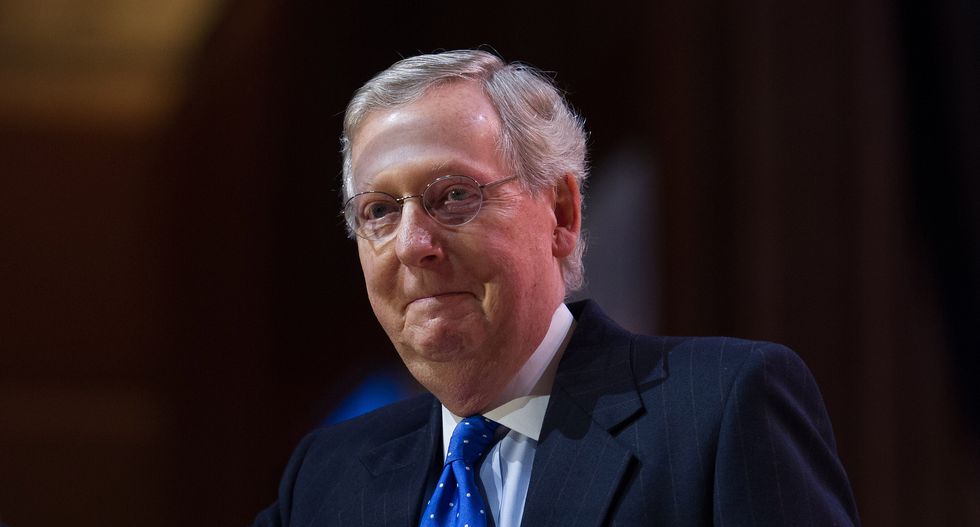 Image via Shutterstock
Cody Fenwick
May 29, 2019

Senate Majority Leader Mitch McConnell made plain on Tuesday that he's just as manipulative, mendacious, and unprincipled as any of his critics have ever said.

CNN reported that at a Paducah Chamber of Commerce luncheon in Kentucky on Tuesday, someone asked if Republicans would fill a Supreme Court seat if it opened up in 2020:

The leader took a long sip of what appeared to be iced tea before announcing with a smile, "Oh, we'd fill it," triggering loud laughter from the audience.

Of course, this admission confirms that he never believed the principle that he propounded in 2020 after Justice Antonin Scalia died, that no Supreme Court justice should be confirmed during a presidential election year. Under McConnell's leadership, the Senate never even considered President Barack Obama's nominee Judge Merrick Garland. This was based on a made-up principle at the time, with no justification and no rational basis, but McConnell pretended that he believed it, and the Republican Party went right along with him.

He said the decision to block Garland was about "a principle, not a person."

The principle, he said, was based on the idea that voters should have a say in who appointed the next justice:

“The American people are in the middle of choosing who the next president is going to be. And that next president ought to have this appointment, which will affect the Supreme Court, for probably a quarter of a century.”

At another point, speaking on Fox News, McConnell said:

KELLY: You could have gone back to —

MCCONNELL: No, no, no. It's about the principle.

He also said, speaking to Chris Wallace on Fox News, "So, all we're doing, Chris, is following a long-standing tradition of not filling vacancies on the Supreme Court in the middle of a presidential election year."

PolitiFact noted that the claim about a "long-standing tradition" was entirely bogus, noting:

The reality is that, at least in recent decades, the Senate has rarely been presented with the opportunity to consider a Supreme Court nominee in an election year. It’s so rare that there’s no fully analogous scenario to compare with the current debate over filling Scalia’s seat.

McConnell’s statement is not accurate, so we rate it False.

But citing an old speech from Joe Biden, McConnell claimed that there he was following the "Biden rule" by failing to even consider Garland's nomination. But Biden's own speech would have suggested that a presidential nominee could have been considered after the time directly after the election and before a new president had been inaugurated, which McConnell refused to do. And, for what it's worth, the Senate at the time rejected adopting the so-called "Biden rule."

McConnell, though, pretended to embrace the rule and hailed it as a guiding principle. Over and over again, he stressed that this was an important standard the Senate should uphold, based on the fact that the voters in the middle of a presidential election should have a say in an election-year Supreme Court vacancy.

Now, of course, he's admitting that the appeal to principle and the will of the voters was an entire fraud. Indeed, it was a fraud on a historic scale, because it allowed the GOP to thwart a Democrat's nominee to the court that would have finally put it in the control of liberal-leaning justices. This would have been in the realm of normal politics if McConnell had let Garland come up for a vote and the Republicans had voted him down. But it's not guaranteed this would have happened, and McConnell was able to protect vulnerable Republican senators from having to take a tough vote on — all on the basis of a fraudulent principle.

So what does the majority leader have to say in response to all this? CNN reported:

David Popp, a spokesman for McConnell, said the difference between now and three years ago, when McConnell famously blocked Judge Merrick Garland's ascension to the Supreme Court, is that at that time the White House was controlled by Democrat and the Senate by a Republican. This time, both are controlled by the GOP.

This, of course, reveals the truth of the matter. There was no principle about presidential elections that McConnell felt bound by. He just knew he had the power to keep the court in his party's hands. He blocked Garland because he could, not to let the voters decide.

What's even more troubling about this is the counterfactual: What if Hillary Clinton had won? What if a Democrat wins in 2020, but McConnell still controls the Senate? Would he permit a Democrat to confirm anyone to the Supreme Court? Or would he, as he has thus far, use every bit of the power he has to continue to shape the judiciary as he sees fit — voters be damned?