Key swing district voters want candidates willing to take on Big Pharma: Americans are 'tired of getting ripped off' 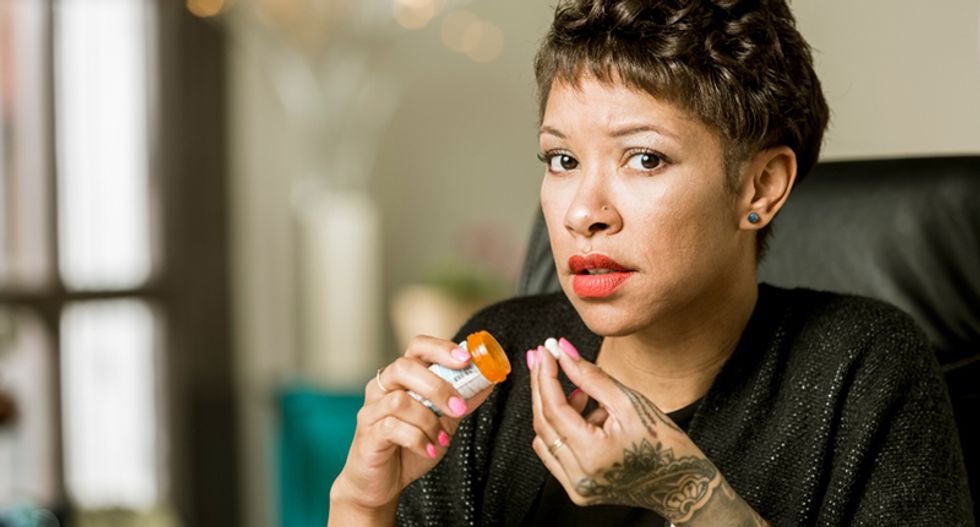 With centrist House Democrats working behind the scenes to craft a drug pricing proposal that is more palatable to the pharmaceutical industry and the Trump administration than the progressive alternative, polling data released Wednesday found that voters in key swing districts overwhelmingly favor candidates who are willing to directly confront Big Pharma to bring down soaring prescription drug costs.

"The American people all across the country are sick and tired of getting ripped off by Big Pharma."

—Alex Lawson, Social Security Works"The American people need and want action on prescription drugs. When our tax dollars pay for research, we should be able to access life-saving drugs at prices we can afford," Stephanie Taylor, co-founder of the Progressive Change Campaign Committee, said in a statement.

The poll also found that 73 percent of voters in these key congressional districts support breaking the pharmaceutical industry's monopoly on life-saving drugs by allowing generic competition.

Over 76 percent of Democratic voters—and 53 percent overall—said they would be more likely to "support a candidate who stands up to Pharma," according to the new survey.

"The American people all across the country are sick and tired of getting ripped off by Big Pharma," said Alex Lawson, executive director of Social Security Works, which is planning to release a "congressional scorecard" to hold members of Congress accountable for siding with the pharmaceutical industry over the needs of patients.

The new polling data comes in the midst of an intraparty fight between establishment Democrats who want to cut a pharma-friendly deal with the Trump administration and progressives who want to take on the pharmaceutical industry with a bold plan to tackle skyrocketing drug prices.

As HuffPost reported last month, House Speaker Nancy Pelosi (D-Calif.) and other centrist Democrats are pushing legislation that would attempt to lower drug prices "through arbitration, rather than regulation or the federal court system."

"Large corporations typically prefer arbitration as a method for resolving disputes with customers," according to HuffPost, "because the private arbitration process is more favorable to corporate interests than public courts."

Progressives, on the other hand, are throwing their weight behind a bill—led by Rep. Lloyd Doggett (D-Texas)—that would allow Medicare to negotiate lower drug prices, a proposal that is extremely popular among the U.S. public.

Under Doggett's legislation, if drug price negotiations fail, the government would be permitted to authorize generic competition.

"Any bill that allows Pharma to engage in arbitration is inconsistent with a real effort to hold Big Pharma accountable," Rep. Ro Khanna (D-Calif.), one of the 122 House co-sponsors of the Doggett bill, told HuffPost.

As Splinter's Libby Watson wrote Wednesday, citing PPP's new survey, "Everybody knows that drug prices in the U.S. are unsustainable and appalling, and that voters are mad as hell about them."

"So this is plainly not a question of mollifying swing or even Republican voters," Watson wrote of centrist Democrats' drug price proposal. "It is apparently a question of mollifying the pharmaceutical industry... and the Republican party, who is openly and completely wedded to doing whatever allows industry to squeeze the life and blood out of regular people for profit in total opposition to what their voters want."