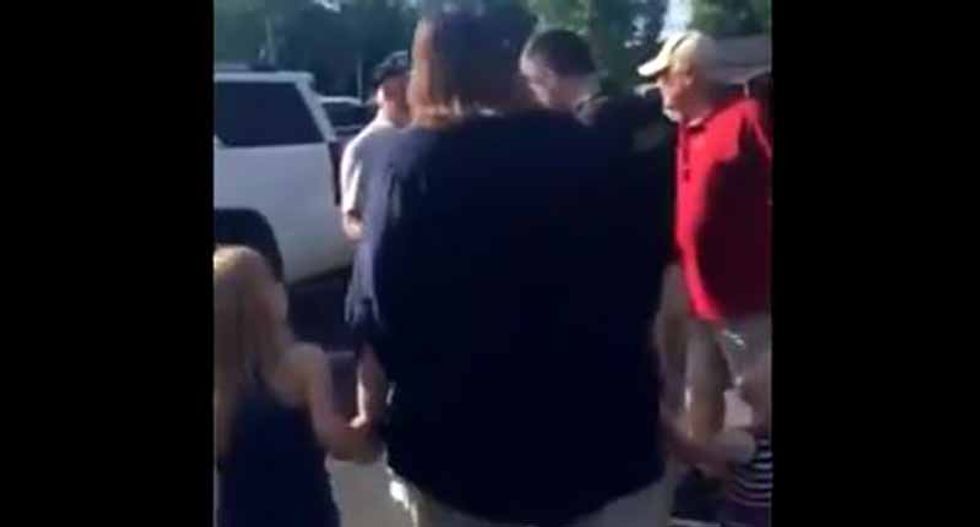 Image via Screengrab
David Badash
and
The New Civil Rights Movement
May 07, 2019Video

A small Georgia town became big news on Monday when news broke its mayor had refused to consider the application of a Black candidate as city administrator, despite her admitting he was qualified. Her reason: "Because he is Black."

Outrage continued as a city councilman defended the mayor.

“I’m a Christian and my Christian beliefs are you don’t do interracial marriage. That’s the way I was brought up and that’s the way I believe,” Hoschton City Councilman Jim Cleveland proudly admitted. He also said it makes his "blood boil" when he sees Black and white people together.

Monday evening Hoschton's city council convened, led by the embattled mayor, in a brief meeting that was open to the public. The racism of two of the town's top leaders was on the agenda and was not discussed.

“You do not represent our community and I didn’t move here for that,” said Shantwan Austin, who the AJC described as "a black man who moved to Hoschton with his family two years ago."

Residents followed Councilman Cleveland out to the parking lot, calling on him to resign as he walked to his truck.

"You are evil," one woman told the Councilman.

"You're a disgrace!" a man yelled at Cleveland.

"You shoud put your hood on, so we can all recognize you," one woman yelled at Cleveland as he walked away.

Another woman approached Cleveland and respectfully asked him to look at a photo of her daughter and son-in-law.

"I don't believe in that," Councilman Cleveland told her.

"You don't have to," the woman told him.

"I don't disrespect it, I promise you I don't – I'm not racist," Cleveland told the woman, interrupting her. "But I do not believe in interracial marriage. And that's the end of that story."

"You are racist!" another woman could be heard in the video.