‘I get to make the wall — Putin makes me his beetch’: Adam Sandler’s ‘Opera Man’ returns to SNL after 24 years to excoriate Trump, Biden 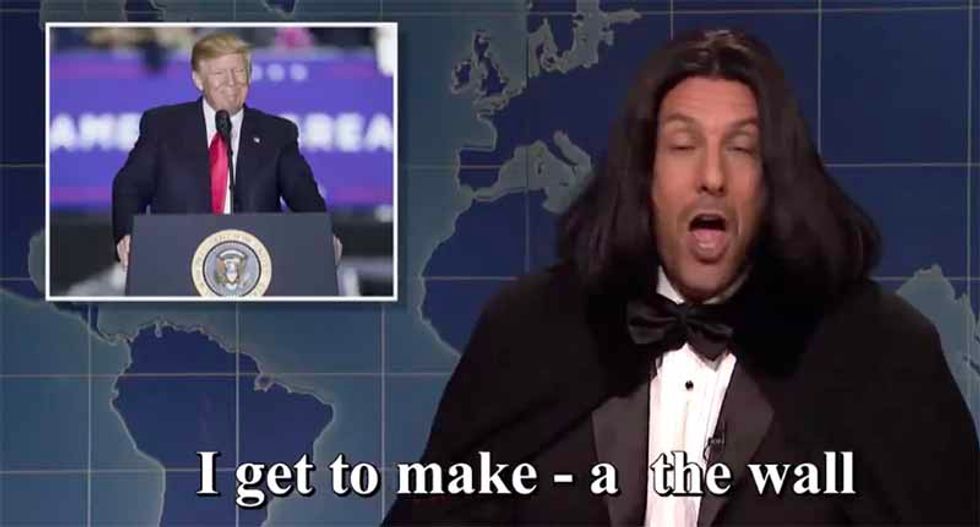 Comedian Adam Sandler, who worked alongside comic icons like Chris Rock and the late Chris Farley when he was part of NBC’s “Saturday Night Live” cast in the early-to mid-1990s, hosted the 44-year-old sketch comedy program on May 4 — and brought back his beloved character, Opera Man, to weigh in on some of 2019’s political events.

Opera Man sang an operatic melody referencing President Donald Trump's alleged extramarital affair with adult film star Stormy Daniels and obvious admiration for Russian President Vladimir Putin, as well as his obsession with building a U.S./Mexico border wall. Opera Man, mocking Trump, sang, “I get to make the wall, Putin makes me his beetch.” And the character also took a crack at Attorney General William Barr, noting his refusal to appear at a House Judiciary Committee hearing on May 2.

Addressing the 2020 Democratic presidential primary, Opera Man noted that a record number of the candidates are women, including Sen. Elizabeth Warren, Sen. Kamala Harris, Sen. Amy Klobuchar and Sen. Kirsten Gillibrand. But he lamented, “They have slim chance, o, they no wear pants, o.” The comedian also noted that among the male contenders, the two frontrunners are men over 70 — Sen. Bernie Sanders and former Vice President Joe Biden — while Sen. Cory Booker, South Bend Mayor Pete Buttigieg and former Rep. Beto O’Rourke are trailing them in polls.