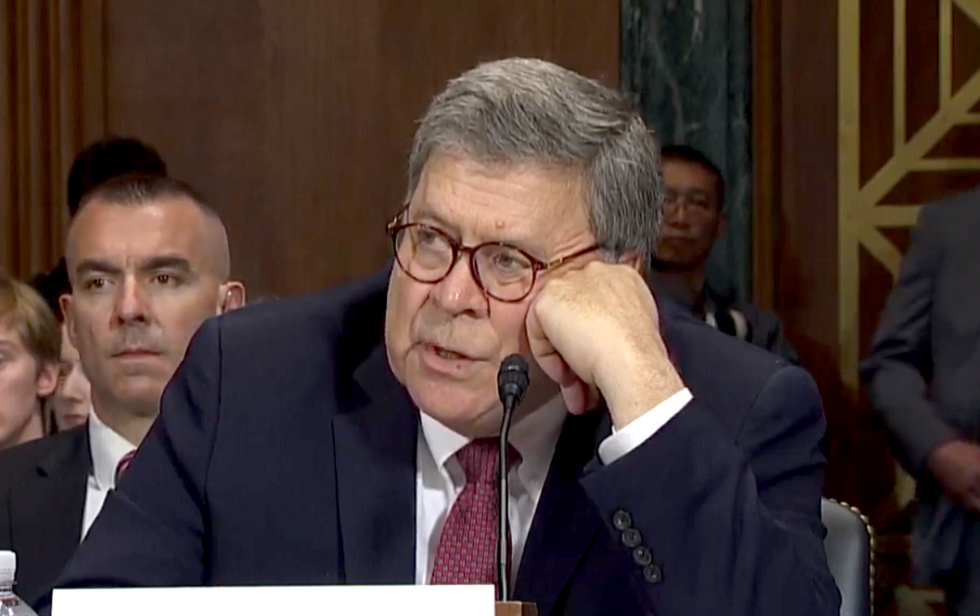 Attorney General Bill Barr delivered much-anticipated testimony to the Senate Judiciary Committee on Wednesday, in which he was repeatedly grilled by Democrats and praised by Republicans for his handling of the Special Counsel Robert Mueller's investigation.

Barr was already facing criticism for previous testimony, in which he indicated that he was not aware of criticism from Mueller's team about his letter describing the "principal conclusions" from the probe's final report. However, it has since been revealed that Mueller sent him a letter and spoke to him on the phone, detailing the team's concerns about the public portrayal of the report.

Throughout his testimony on Wednesday, Barr was evasive, manipulative, and outright dishonest in his answers to lawmakers. Here are seven notable moments:

1. Barr claimed that there was no "underlying crime" to obstruct an investigation of.

The attorney general has announced that President Donald Trump's conduct Mueller laid out in his report does not, in his view, constitute obstruction of justice. Mueller's view, as suggested but not outright states in the report, seems to be that such a charge could be brought on at least several of the instances of obstructive acts.

But one reason Barr has given, and gave again Wednesday, for concluding that Trump didn't obstruct is that there wasn't an "underlying crime" for the investigation to find. However, this is plainly false. There were many crimes by many of Trump's aides and associates that Mueller found and prosecuted; there were also crimes committed by the Russians that substantiate the claims of 2016 election interference that Trump has tried to deny. The Southern District of New York has likewise charged a crime, arising from Mueller's probe, that implicates the president in a campaign finance crime. Moreover, because of Trump's putatively obstructive acts, it's possible that more crimes weren't found. And Mueller aptly points out that one can obstruct justice for reasons other than covering up a crime such as, for example, to avoid personal embarrassment.

So Barr's defense on this front is both fatuous and false.

2. Barr also claimed that obstruction is rarely charged without an underlying crime.

As noted above, the premise of this assertion as it relates to the Russia investigation is false. However, legal experts and former prosecutors argued that Barr's further claim is just as deceptive.

"It’s been said 100 times but will say it again it is not 'normal' or even 'common' obstruction case that there is an underlying crime that has been proven," said former federal prosecutor Mimi Rocah.

3. Barr claimed that the allegations against Trump have been "proven false."

The attorney general repeatedly claimed that the accusations against Trump have been proven false. He wasn't specific about what he meant, but even under a generous reading, it's not at all true.

Even if Mueller didn't conclude there was evidence of, say, a criminal conspiracy with Russia, that doesn't mean it's been proven false. It just means there wasn't evidence for it. As attorney general, Barr certainly knows the difference between these two statements, but he misled the Senate and the public anyway.

Conflating "not finding evidence" and "proving false" is a particularly erroneous claim to make in this case, in which Trump is accused of obstructing justice that could have limited the investigators' ability to find evidence.

4. Barr claimed a president can block an investigation that is "unfounded."

The attorney general's claimed that, as long as a president concludes an investigation is unfounded, he can use his authority to quash it.

"The president does not have to sit there constitutionally and allow it to run its course," Barr said. "The president could terminate the proceeding and it would not be a corrupt intent because he was being falsely accused."

This is a wild position to take. Yale professor Asha Rangappa has argued persuasively that it is bogus, and that a president can be found to have corrupt intent in trying to block an investigation. It would suggest, for instance, that President Barack Obama could have just stopped the investigation of Hillary Clinton's emails in 2016 if he thought it was "unfounded" — a decision Republicans would surely have found to be unacceptable at the time.

In one of the oddest moments of the hearing, the attorney general expressed displeasure with the letter from Mueller, who is reportedly a friend of his.

One of the standout moments of the hearing was Harris's cross-examination of the attorney general. She managed to catch him flat-footed when asking whether the White House had asked him to carry out any investigations, and she hounded him over the impropriety of Deputy Attorney General Rod Rosenstein weighing on whether Trump obstructed justice even when he was a key witness to central events in question.

Hirono was perhaps the most aggressive questioner of Barr, saying that he lied to Congress and that he should resign. Her tirade prompted a rebuke from Chair Lindsey Graham, who said she "slandered" Barr.