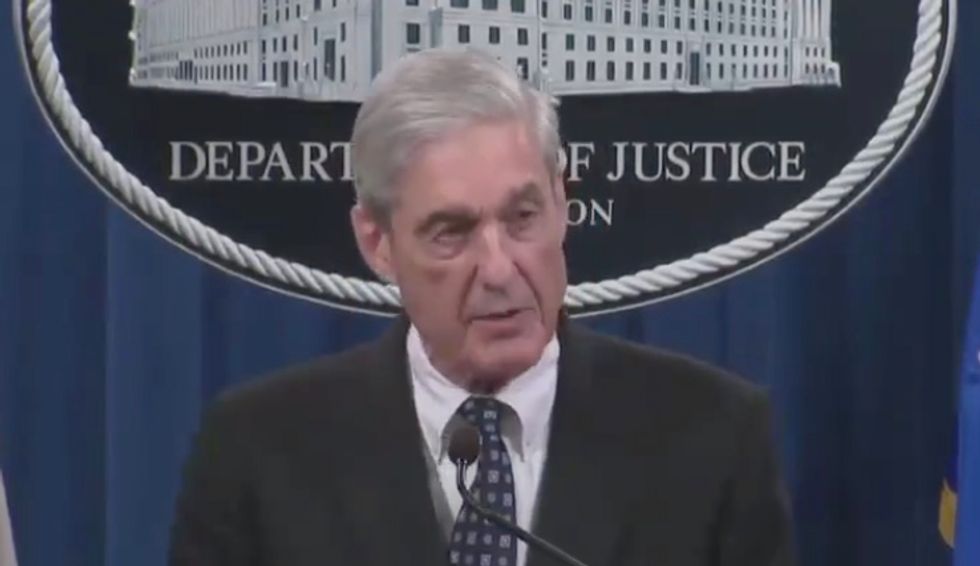 Breaking his extended silence, special xounsel Robert Mueller publicly spoke for ten minutes on the Russia investigation in Washington, D.C. on Wednesday morning at 11 a.m. EST. Here are some of the highlights.

1. Mueller can not say with "confidence" that Donald Trump "clearly did not commit a crime."

During the press conference, Mueller iterated a point he made in the final report: that the special counsel's office would have exonerated President Donald Trump if investigators were certain he hadn't committed a crime.

MUELLER: "If we had had confidence that the president clearly did not commit a crime, we would have said so." https://t.co/FTSsPuiDje
— Aaron Rupar (@Aaron Rupar) 1559143797.0

2. Mueller was bound to honor policy against indicting a sitting president.

Mueller said that while Trump was investigated for possible obstruction of justice, an indictment of a sitting president was not an option. “Charging the president was an option we could not consider,” Mueller stressed.

Mueller says “charging the President was an option we could not consider.” Says the DoJ position was that a sitting… https://t.co/Fmo4u1X0I0
— Chad Pergram (@Chad Pergram) 1559142431.0

3. Mueller indicated that he will not testify before Congress

Democrats in the House of Representatives have been hoping for Mueller to testify before Congress, but Mueller indicated that he won’t be testifying — saying, “The work speaks for itself. And the report is my testimony.”

Mueller indicates he does *not* want to testify before Congress. “The work speaks for itself. And the report is my testimony.”
— Rick Klein (@Rick Klein) 1559142532.0

4. Mueller stressed that Russian interference in 2016 was aggressive and brazen

Mueller said, “There were multiple, systematic efforts to interfere in our election, and that allegation deserves the attention of every American.”