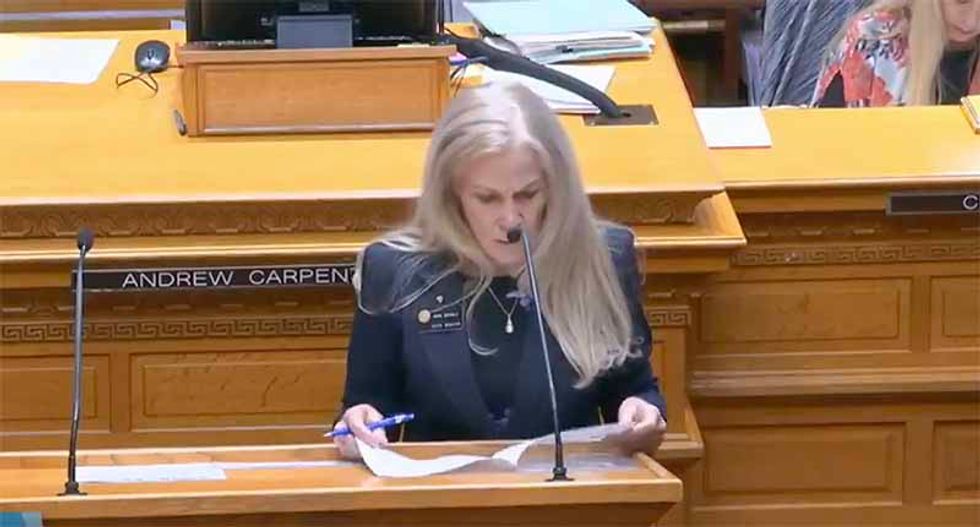 I’m not saying Vicki Marble, a Republican senator from Colorado, is racist. However, if you want to know why racists love Vicki Marble, it’s comments like this, spoken at an Economic Opportunity Poverty Reduction Task Force meeting:

When you look at life expectancy, there are problems in the black race: sickle-cell anemia is something that comes up, diabetes is something that’s prevalent in the genetic makeup and you just can’t help it.

Although I’ve got to say, I’ve never had better BBQ and better chicken and ate better in my life than when you go down south and you — I love it.

Turns out minorities are poor because of their diet. Marble went on to criticize the eating habits of other minority groups. She scolded Mexicans for not eating enough vegetables after they immigrate here.

There was a significant backlash, but she never apologized.  You’d think, however, that she’d at least tone it down. Not in the Trump era.

Last month, an Equal Pay Day resolution was introduced in the Colorado Senate, which did absolutely nothing but condemn the pay disparity and “encourage” state government agencies to try to find ways to close the gender gap.

Pretty toothless, but still too much for Ms. Marble.

Lucky for her, the Colorado state legislators have set wages. However, women with no political power outside of the capitol building are normally paid a lot less than men for doing the same job.

Imagine getting paid almost half of what your white male counterpart makes. For many reading this, they don’t have to imagine, because it’s happening to them.

Marble wasn’t the only GOP legislator to vote against it. She was, however, the only one that tried to actually defend the pay disparity---and threw in her standard racist overtones to boot, saying, ”...and I just can’t take part in something that is so focused against the white man. Because frankly, I feel white men have done a lot for this country...”

This has not been a good year for Ms. Marble.

In April, she was found guilty of ethical violations because of her role in a public meeting on energy paid for by Extraction Oil and Gas. The Colorado Office of Legislative Legal Services spent $47,832 in taxpayer money defending her, but she only had to pay a little over two thousand dollars in fines. The month prior, she received backlash for calling for secession over health and safety regulations for the oil and gas industry.

Last time, an African-American Democrat, Bloomfield mayor T.J. Cole, made a solid run against her. I hope he decides to run again. In the meantime, I’ll ask that you support either the Colorado Democrats or the Weld County Democrats so they’ll have some ammunition to take her down.

Getting rid of Trump will do nothing if the mini-Trump’s in our state legislatures are allowed to keep their jobs.