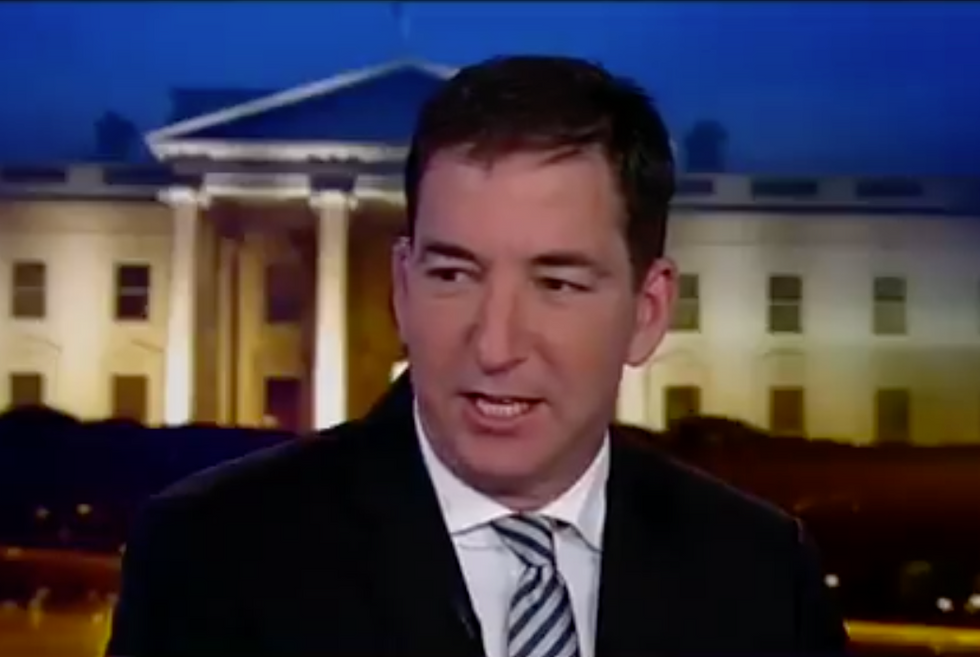 The Intercept's Glenn Greenwald has been on a crusade since the 2016 election to thoroughly combat the extensive reporting and analysis linking the Russian government and intelligence agencies to the interference in the 2016 election. Since the release of the Special Counsel Robert Mueller's final report, which concluded without establishing that there had been any conspiracy between President Donald Trump's campaign hand the Russian government, Greenwald has vociferously declared victory and claimed that he has been vindicated and those who have covered the story have been shown to be con artists.

And on Fox News Thursday night, Greenwald joined host and hero to white supremacists Tucker Carlson to continue his victory lap. But despite claiming to be a leftist, he gratuitously devoted himself to smearing Democrats and the media while playing directly into Trump's public relations strategy — all while lying on numerous counts.

"The Democrats have put all their eggs in one basket, which is that they've insisted the central theme of the Trump presidency is that he was a Russia agent who collaborated with the Kremlin in the election, and they all agreed that Robert Mueller was going to be empowered to get to the bottom of this, and we were all going to accept whatever it was the Mueller found," Greenwald told Carlson. "And what Mueller found was that the entire conspiracy theory was a hoax. That there was no evidence to establish that it was true."

This is flagrantly wrong on many levels, so it fits in well on Fox News. First, it's just not true that "Democrats have put all their eggs in one basket" and that that basket was the Russia investigation. In 2018, the Democrats running across the country almost uniformly ran on health care. Russia wasn't even a secondary issue, except insofar as Trump's bizarre praise of President Vladimir Putin and other dictators shows his corruption — but many Democrats didn't campaign against Trump at all, preferring to focus on issues relevant to their constituencies. Not a single 2020 Democratic presidential candidate has spent much time at all discussing the Russia investigation unless reporters ask. Much of 2017 was focused on a fight over health care and taxes, public relations battles that Democrats have arguably won.

And House Speaker Nancy Pelosi — the most powerful Democrat and the party's de facto leader — has fought Trump on border wall funding and the government shutdown. When asked about impeachment, she said she was uninterested unless Mueller's conclusions really changed the circumstances — but she never acted as if that was an inevitable possibility.

And, of course, Mueller's report didn't prove that the Russia investigation was based on a hoax. It found extensive connections between the Trump campaign and Russia, including a business deal from the Trump Organization to potentially build a Trump Tower Moscow that was ongoing ahead of the election. Trump's personal lawyer later sentenced for engaging in a criminal coverup of this deal. Trump's Campaign Chair Paul Manafort and Deputy Campaign Chair Rick Gates were found to have been Ukrainian agents, and they were also working to pass internal polling data along to a Russian oligarch during the campaign during the election via someone Gates believed to be a Russian "spy." There are many more suspicious contacts. Mueller didn't conclude any of these amounted to a conspiracy, but he certainly didn't find that any suspicion of such a conspiracy was a "hoax."

To be fair, Greenwald is right that some in the media got out over their skis and predicted conclusions of the Mueller probe that turned out to be unfounded. That's true, and that inevitably happens, and maybe some or most of such people were even acting irresponsibly. But while this is a legitimate complaint and debate to have, Greenwald wildly inflates the claim to indict all Democrats and much of the mainstream media, when in fact there were many different writers with varying opinions about the matter throughout the investigation. Many media figures have been skeptical that a conspiracy would ever be found, even while finding Trump's behavior regarding Russia duplicitous and objectionable. And much of the reporting on the Mueller investigation was solid, credible, and informative — and ultimately confirmed, not disproven, by the report. This includes many reports that Trump and Fox News called "fake."

Greenwald also doesn't acknowledge that there are many questions left open in Mueller's report, and many Russia-related questions that weren't addressed at all. Obviously, this doesn't mean we should conclude there was a conspiracy or that Trump was compromised after all — but it means our conclusions about what there wasn't should be much more tempered. In this way, Greenwald is guilty of the overreach that he accurately points out in others.

It's also important to acknowledge that Greenwald himself has gotten key developments in this story wrong. He was long a skeptic of the claims that Russia was involved in the 2016 election at all. At this point, such skepticism seems completely untenable, unless you believe that Mueller completely fabricated out of whole cloth the events detailed in his indictments of the GRU (Russian intelligence) hackers and the Internet Research Agency social media trolls. But Greenwald rarely is candid enough to admit this grievous error — a mistake that just happened to echo Trump's deceitful rhetoric.

And this is where Greenwald's lies and victory laps get particularly disturbing. It's fine to have a perspective on a story, and it's fine to feel vindicated if you think the conclusion of that story vindicates your perspective. But as I've argued, Greenwald isn't just claiming he was right, he's lying wildly and grossly mischaracterizing the view of others. And all this lying has a singular effect: feeding Trump's public relations effort around the Mueller investigation and his attacks on Democrats. He is, willingly or not, a part of the Trump re-election effort.

There's no obvious reason why Greenwald should want to lie for Trump's benefit. If he were just a leftist who didn't like the way the Russia story was covered, that would be a reasonable position to hold. But while it might justify penning some critiques of the media and sniping at fellow reporters, it would never justify going on Fox News — an unabashed racist propaganda network devoted to promoting the president — and lying about the Democratic Party. A credible leftist might reasonably argue "The media botched this story and missed many other important topics" – but the reasonable response is to then cover those other topics.

And as someone who portrays himself as particularly concerned with government overreach and the punitive nature of law enforcement, Greenwald seems largely uninterested in some of the key revelations from the Mueller report that bear on this topic. He's not defending Hillary Clinton, who, the Mueller report reveals, Trump demanded his attorney general investigate even after she had been exhaustively investigated. And he's not critiquing Trump's wild abuses of power and obstruction of justice, even as Attorney General Bill Barr argues for a grotesquely extended vision of presidential authority.

Indeed, even while he admitted back in April that Trump is "amoral" and "willing to corruptly abuse his power to protect himself," Greenwald defended Trump on obstruction of justice, saying: "He was [trying] to stop the investigation because he thought it was a sham all along, and therefore, even though he lied and acted improperly, it doesn’t rise to the corrupt intent needed to charge him with obstruction, which is stopping an investigation to prevent your own wrongdoing from being uncovered."

This is, again, just wrong on the facts and the law.

So why does Greenwald spend so many of the hours of his life doing PR for a right-wing president? And why do so many of his lies, or more generously, mistakes, just happen to support Trump's interests? The most natural suggestion, that he secretly loves and supports Trump, is pretty silly and difficult to believe.

There are two more plausible explanations, both of which may be true. He knows he was a part of Russia's efforts to influence the 2016 election, spreading hacked emails from the Russian sock puppet Guccifer 2.0. He's been in a defensive crouch ever since, which also stems from his ideological alliance with WikiLeaks. And second, he hates the Democratic Party so much that he's been warped into playing a role in the right-wing media's defense and promotion of Trump.

In effect, he's betraying the values he says he wants to protect. But he really doesn't seem to care.