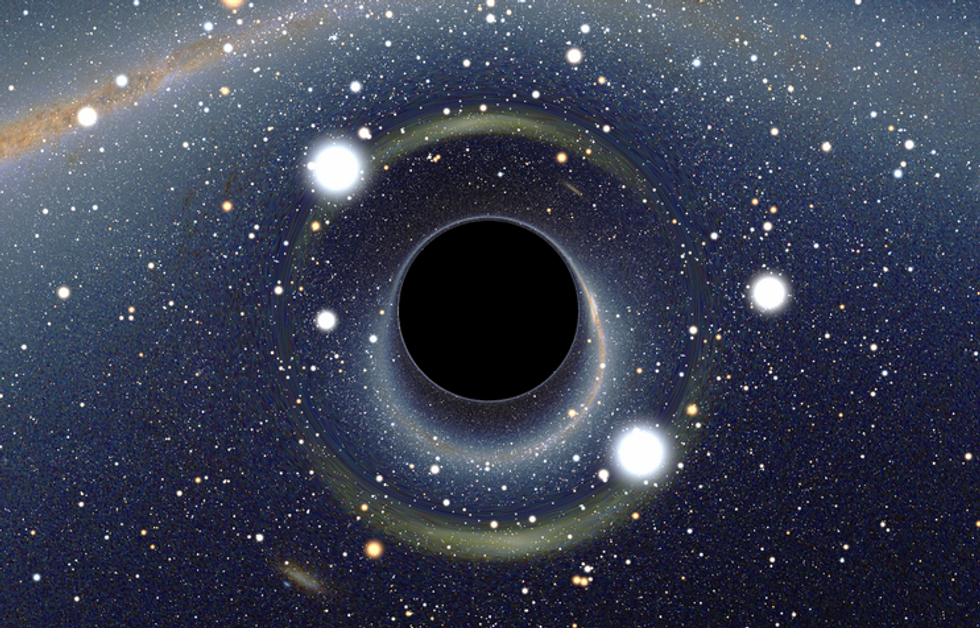 At last,  April 10 could mark the day scientists have been anticipating for more than a century as the first image of a black hole is expected to finally be revealed. The Event Horizon Telescope (EHT) Collaboration will “present its first results in multiple simultaneous press conferences around the world,” according to a media release. While the EHT team did not specify that an image will be released, scientists around the world are expecting it.

“My guess is EHT will produce an image of the supermassive black hole at the center of the Milky Way galaxy and also an image of one at the center of the nearby galaxy M87,” Dong Lai is a professor of astronomy at Cornell University and an expert on black holes said in a statement. “More precisely, these are images of radiating hot gas orbiting very close to the black hole. The strong gravity — the ‘event horizon’ — of black holes create a dark shadow with a distinct shape where no light can be seen.”

The supermassive black hole at the center of the Milky Way, Sagittarius A*, is 26,000 light-years away and has four million times the sun’s mass. Most galaxies are believed to have a supermassive black hole at their center upon which they pivot. As Salon has previously explained, imaging a black hole directly is impossible, given that they do not emit light; rather, astronomers aim to capture the matter that swirls around them at incredible speed due to their immense gravity, and which often radiates light.

“Nevertheless, it will be very nice and gratifying to see the black hole shadows directly,” Lai said. “This is very challenging because the images are heavily blurred by the interstellar gas. The EHT team is to be congratulated for overcoming many technical challenges to achieve the goal of imaging black holes.”

Indeed, the reveal of a black hole image will be an unprecedented moment in scientific history. Since the idea of a black hole was formulated in the late 1700s scientists have speculated and simulated what these kinds of images would look like. The vague idea of a black hole — meaning, a singularity so dense and so massive that its escape velocity is greater than the speed of light — was first theorized by English scientist John Michell in the 18th century, and later developed further by Albert Einstein in the 20th century in his General Theory of Relativity.

Yet despite technological advancements in astronomical imaging, black holes have remained an enigma, partly because they are so compact and dense. A telescope the size of Earth would be needed to directly observe even the closest one. In the case of the EHT, scientists have assembled an array of smaller telescopes that collectively act like a one big one.

Abraham Loeb, professor and chair of astronomy at the Harvard-Smithsonian Center for Astrophysics, explained to Salon in March how the observatories work together to make an Earth-size telescope.

“Observatories operating at millimeter wavelengths enable the highest angular resolution because they are spread on the scale of the Earth, making effectively an aperture of that size,” Loeb said. “For the first time, the Event Horizon Telescope combines sufficient millimeter observatories at large enough separation to get image the silhouette of the black holes in the Milky Way (SgrA*) and M87.”

As Loeb said, scientists both from the past and present will never forget tomorrow if the image is revealed.

“Karl Schwarzschild and Albert Einstein would have been thrilled to see this image, just a century after the black hole idea was mathematically formulated,” Loeb said.