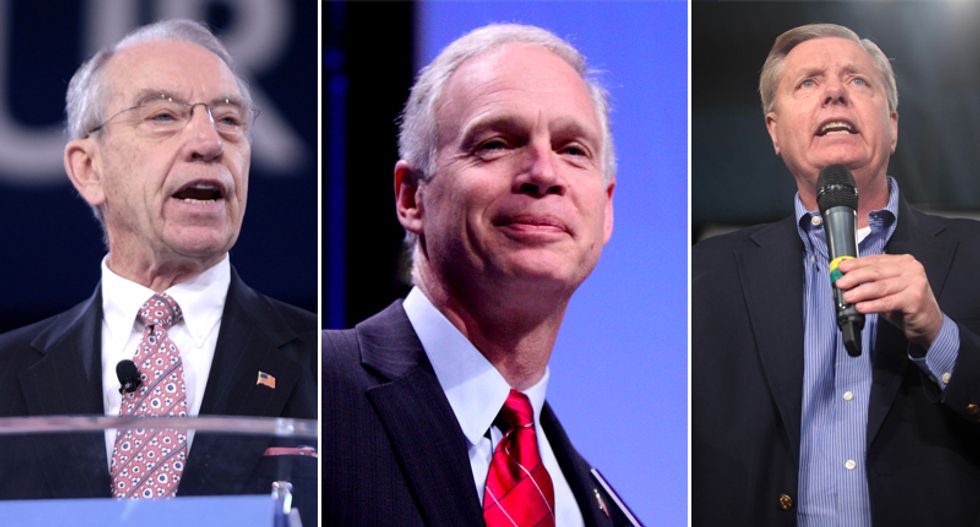 As Attorney General William Barr prepares the release of a redacted version of special counsel Robert Mueller’s Russia investigation report, Sen. Lindsey Graham (R-SC) is reportedly recruiting other Republican senators help with a separate endeavor. As MSNBC reports, “a trio of top Republican senators” are demanding the Justice Department “hand over information on the handling of the probe into Hillary Clinton’s private email server.”

Graham, along with Sen. Ron Johnson (R-WI) and Sen. Chuck Grassley (R-IA) sent a letter to Barr on Tuesday requesting documents pertaining to the department’s investigation of the former secretary of state.

The document request comes despite federal investigators clearing Clinton of criminal wrongdoing, and a separate Justice Department inspector general examination that reviewed the department’s probe. According to Politico, the trio of senators have requested a “classified briefing on steps the Justice Department plans to take in light of its inspector general’s 2018 report," according to Politico.

“Now that the Special Counsel’s investigation has concluded, we are unaware of any legitimate basis upon which the Department can refuse to answer the Judiciary Committee’s inquiries,” Graham, Johnson and Grassley — who chair the Senate Judiciary Committee, Senate Homeland Security and Government Affairs Committee and Senate Finance Committee, respectively — wrote in their letter to Barr.

The lawmakers also claimed a portion of the inspector general’s report “raises significant issues associated with the FBI’s failure to review certain highly classified information in support of its Midyear investigation.”

As Politico notes, Graham has likewise pledged to investigate whether the DOJ and FBI attempted to influence the 2016 to stop Donald Trump from becoming president.