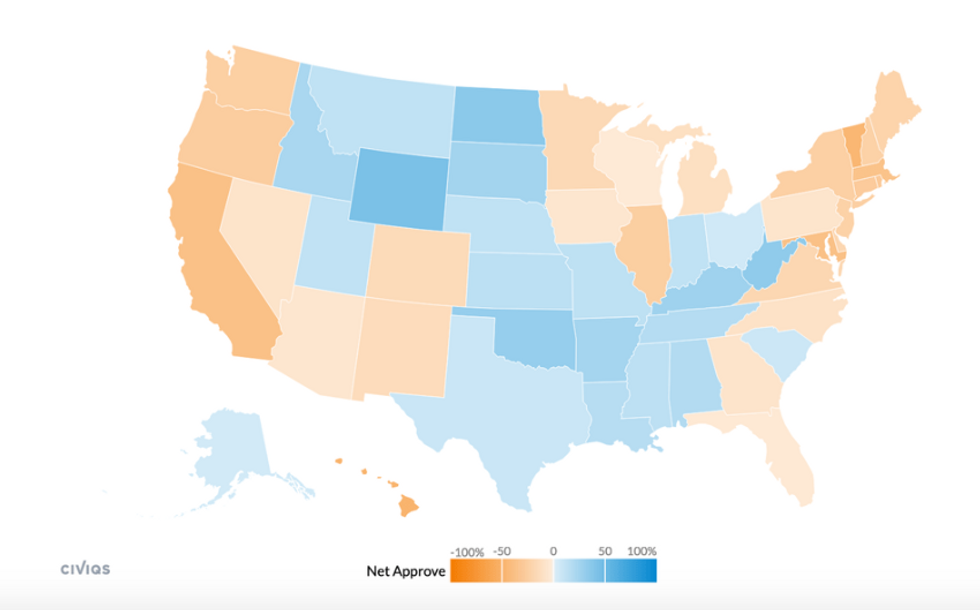 Okay, maybe the new Civiqs 50-state results for key questions aren’t the most amazing thing ever, but they’re crazy amazing. The ability to filter by state and demographics has never been achieved before. So take a look at the image at the top of this page. That’s Trump’s approval rating in all 50 states. Click on the link above, and you can see the exact numbers for each state. But then you can do amazing shit, like sorting! So what do Traitor Trump approval ratings look like among young people?

Damn. The GOP is f’d in the long term, absent some serious changes. And Democrats are f’d in the short term if we can’t get those young voters to vote!

What about old people? The results are what you would imagine.

This is the GOP’s electoral bulwark. The problem for them is that those voters are … exiting the electorate. But it’s a long-term problem. In the short term, it’s the Republican Party’s greatest strength.

Oof. The West Coast and Northeast represent! Colorado and New Mexico are enlightened, as are Illinois and Minnesota. The big surprise? Iowa, a 10-point Trump state in 2016. Those farm tariffs might actually be starting to create lasting harm!

Want to cringe harder? Let’s look at white men. Ouch. Brutal. But want a little bit of hope? Here are the results for white young men. Even those blues get universally lighter. And young white women are definitely picking up the slack.

We can live with a GOP that’s relegated to Wyoming, Oklahoma, and small southern outposts, right?

But if you want to know why I firmly believe that the Democratic Party needs to put forth candidates of color and women up and down the ballot, look at these next two maps. Here’s all women:… and among black or African Americans:

Our diverse cast of candidates was a huge success in the 2018 midterms, and we should be doubling down on the strategy in 2020. The more our candidates look like our voters, the easier it is to turn out our hard-to-reach demographics. Because if our people vote, we win—and we don’t even need all those 65+ voters to exit the electorate!

If you want more info on how Civiqs conducts its research, see this post by Drew Linzer, who runs the project.

And play with it. We have a bunch more information publicly available at Civiqs.com.