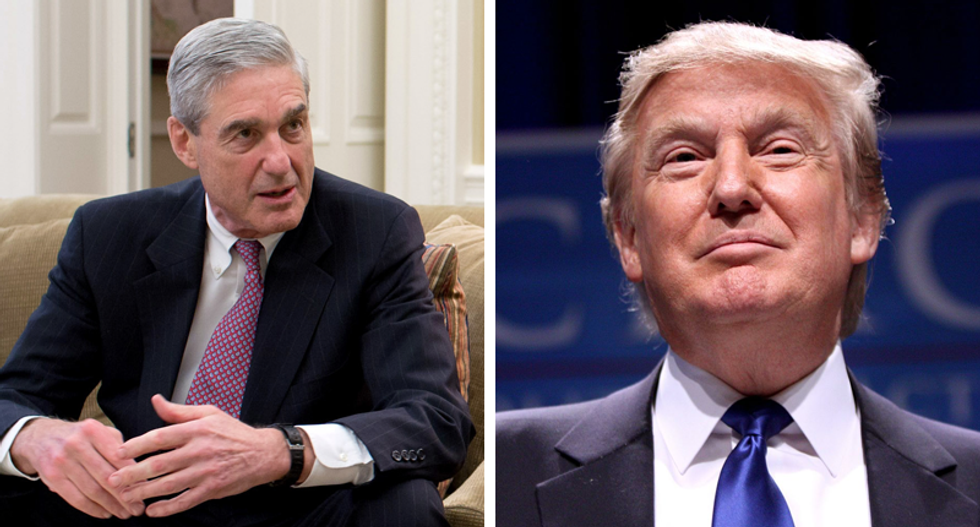 You want to know why Attorney General William Barr is stalling and redacting the Mueller report? Because it shows that the Russian government sought to aid Donald Trump and his 2016 campaign for the presidency in multiple ways, that the Trump campaign actively sought this help from the Russians and used their help when it was given, and that neither Trump or anyone on his campaign reported the Russian interference to the FBI or any other law enforcement agency.

Barr’s letter to the congress, which is all that we know so far, said the Mueller report found that the Russians interfered in the election of 2016, but did not find “anyone associated with the Trump campaign . . . conspired or coordinated with Russia.” That’s what Trump is taking for evidence that Mueller found “no collusion” in his report, and that’s what Barr is going to protect with the heavily edited and redacted version he will release to the public whenever the hell he gets around to it.

That, in a nutshell, is also what American politics has devolved to in the age of Trump. It’s okay to lie and cheat and even break campaign finance laws, as Trump did when he directed his lawyer Michael Cohen to pay off Stormy Daniels to buy her silence just before the election. It’s okay to have specific knowledge that a hostile foreign power is actively interfering in the election and refuse to report what turned out to be federal crimes to the authorities. It’s okay to come right out and ask for help from a hostile foreign power — “Russia, if you’re listening” — and it’s okay to repeatedly and loudly thank the Russians for the help they were providing — more than 160 mentions of the hacked Democratic Party emails by “WikiLeaks” at rallies in the closing months of the campaign. The Mueller report will show Trump and his campaign did all of that and probably more, but according to Trump, it’s okay because it’s not “collusion.”

In declaring his complete “exoneration” by Mueller based on the Barr letter, Trump is of course defining “collusion” right down to Barr’s finding that no one on his campaign “conspired or coordinated” with the Russian government. This does a couple of things for him. First, it removes anyone not on the payroll of the Kremlin. This would include such tasty figures as Joseph Mifsud, the Maltese “professor” who informed George Papadopoulos way back in April of 2016 that the Russian government had “dirt” on Hillary Clinton in the form of “thousands of emails” that they were willing to share with the Trump campaign. According to the Trump definition, this couldn’t be “collusion” because Mifsud didn’t work directly for the Russian government.

It would also include the well-known former Russian intelligence agent, Kostintin Kilimnik, the former partner of Trump campaign manager Paul Manafort in Ukraine. Kilimnik is the character Manafort emailed after he moved into the Trump campaign in March of 2016, asking how they could use his new position to “get whole” with Oleg Deripaska, a Russian oligarch to whom Manafort owed millions of dollars, and for whom Kilimnik was now working. He is also the man with whom Manafort met during the now-famous “cigar room” meeting, and to whom he passed many pages of private Trump campaign polling data. But this couldn’t be “collusion”  because Kilimnik was not an employee of the Russian government.

And then there is the infamous Trump Tower meeting in June of 2016, when Donald Trump Jr., Paul Manafort, and Trump son-in-law Jared Kushner sat down with no less than 6 Russians who had offered to provide “dirt” on Hillary Clinton to the Trump campaign. This was the meeting that Trump took the time out of his busy schedule as President to lie about when he oversaw the issuance of a press release to The New York Times ascribing the meeting to a discussion about “adoption” issues with the Russians. It took only days for that lie to collapse when Donald Trump Jr. released a collection of emails to the Times establishing that the meeting had in fact been about the Russians’ offer of “dirt” on Hillary.

But this offer of help to the Trump campaign by six Russians couldn’t be “collusion” because they were not employees of the Russian government.

This is only part of the minefield Barr tiptoed through in his March 24 letter to the Congress, and it just scratches the surface of the minefield he faces as he proceeds to eviscerate the Mueller report with redactions and edits.

The reason Barr is taking his big black Sharpie to Mueller’s report is because it outlines the many other instances when the Russians offered help to the Trump campaign. Not only did the Trump campaign refuse to report these contacts with the Russians — there are reports of more than 100 contacts between Trump campaign associates and Russians during the campaign — but they happily made use of the “dirt” the Russians offered repeatedly to the campaign when it was finally released by WikiLeaks and Guccifer 2.0 — who has been identified as a Russian GRU agent. Trump used the “dirt” on Hillary every time he opened his mouth and talked about the scandalous information revealed in the emails released by WikiLeaks. For Trump’s followers, the mere mention of WikiLeaks became shorthand for Clinton corruption, whatever it was. Who knew? Who cared? Trump said it, and that was good enough.

The main excuse Barr is going to use for redacting the heart and soul out of the Mueller report is grand jury testimony. He already reported to the congress that Mueller’s investigation involved interviews with more than 500 individuals. We know the names of only a few people who appeared before Mueller’s grand juries. Sam Nunberg, the former Roger Stone partner is one, because he went on MSNBC and admitted he testified. Others include Jason Maloni, a former spokesman for Manafort, and Bijan Kian, an Iranian-American businessman and former associate of Michael Flynn. But many, many other figures from the Trump campaign have also appeared. Among them are probably the people Mueller indicted who pled guilty, including Michael Flynn, George Papadopoulos, Rick Gates, and Alex van der Zwaan, and others such as former Trump press aides Hope Hicks and Sean Spicer. You can bet the number runs into the many dozens, if not hundreds.

Most of these witnesses were first interviewed by the FBI and then taken before the grand jury by Mueller’s prosecutors. Some of their testimony led to the 34 indictments Mueller brought. But you can bet your life that much of their testimony simply fleshed out what Mueller discovered about how the Trump campaign managed to meet with Russians, listen to their offers to help Trump get elected, and then proceed to use the fruits of those Russian offers — the multiple troves of the Democratic Party emails — in the closing months of the campaign.

A report in Justsecurity.org by former U.S. Attorney Barbara McQuade outlined all the ways Barr can define information in the Mueller report as protected by the federal rules regarding grand jury testimony. Courts have interpreted the law very broadly when it comes to protecting grand jury testimony. He can exclude the names of witnesses, for example, as well as their testimony. He can include information obtained by subpoena and as a result of a search warrant, because a court held that the subpoena or search warrant can act as an “agent of the grand jury.” Barr could even refuse to release Mueller’s own conclusions and analysis of his findings because yet another court ruled that “conclusions reached as a result of the grand jury investigations” can also be protected by grand jury secrecy rules.

So get ready for some heavy, heavy redactions. Barr will probably strip out stuff we already know about from reports in the press, such as the Papadopoulos and Manafort and Trump Tower revelations, because details about them were revealed in grand jury testimony.

Barr can redact and redact and redact all he wants, but he can’t erase this: The Russian government offered to help Trump get elected. The Trump campaign informed no one of this fact when it occurred during the campaign in 2016. And then Trump himself went on the stump and used the fruits of those Russian offers, the emails turned over by the Russians to WikiLeaks, over and over and over again to pound Hillary Clinton and paint her as corrupt and dangerous. Trump stood there at rallies and in interviews and thanked Vladimir Putin for his help again and again by praising him as a great leader. And he continues to thank Putin for his help every time he says he takes Putin’s word that the Russians did not interfere in the election of 2016.

Barr and Mueller may not define that as conspiring and coordinating with the Russian government, but it’s sure as hell collusion.