The crisis is here: Trump is a weak president — but he's a budding authoritarian 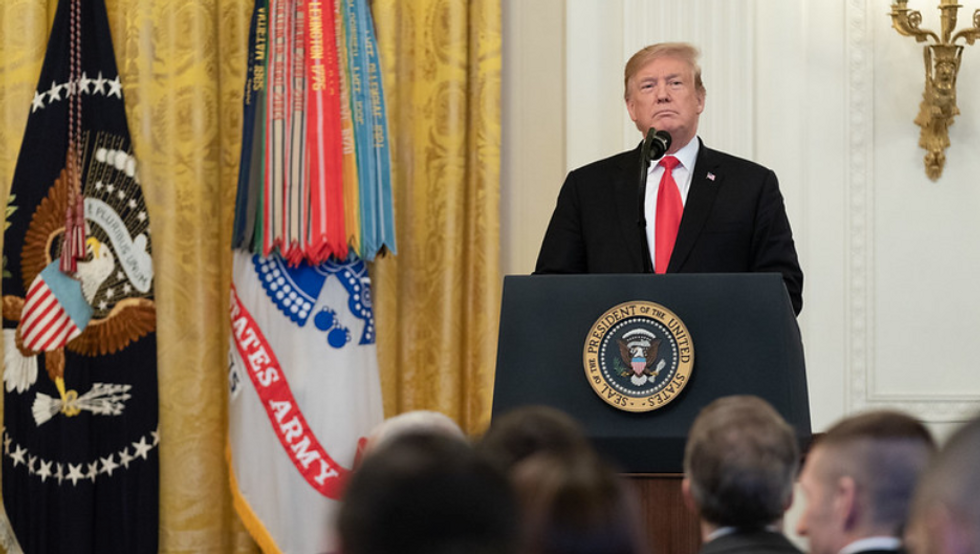 President Donald Trump' authoritarian instincts have long been transparent. But as his presidency stretches on, he's figuring out how to take those instincts and apply them to the powers he has — consolidating power within his branch to the cost of others.

A string of events and revelations this week showed how Trump is accruing authority, abusing his power, threatening to violate the law, thwarting the checks on his office, and attempting to install loyalists wherever he can.

The week began with the purge of the Department of Homeland Security. Trump ousted Secretary Kirstjen Nielsen because he reportedly grew frustrated when she repeatedly refused to violate the law. And according to CNN, he told border agents last Friday that they should ignore the law and refuse to admit asylum seekers.

If judges tried to force them to allow asylum seekers into the country, he reportedly said, they should respond with: "Sorry, judge, I can't do it. We don't have the room."

The will to ignore the judiciary is a classic hallmark of authoritarianism. So, too, is the will to work around the legislature.

Frustrated that officials won't just do what he says, Trump seems committed to filling top roles in his branch with people in an "acting" capacity — circumventing the need to go through Congress at all. In DHS, Trump hit a bit of a speed bump in this process; he wanted to install Kevin McAleenan as the next secretary after Nielsen, but the law said Undersecretary Claire Grady was next in line. But this problem was quickly solved when Grady resigned in the middle of the week, so McAleenan has become the acting secretary.

Trump has said explicitly that he likes have top officials who are operating in an "acting" capacity — who aren't, in otherwise, Senate-confirmed.

“I like 'acting,'” Trump has said. “It gives me more flexibility."

Indeed it does, but that's exactly what the Constitution is supposed to guard against. The framers included the requirement that top executive officials must be confirmed by the Senate so that a president could not install cronies and rule with unaccountable puppet appointees.

And it's not just DHS — six top agencies are now operating with acting leaders.

New reporting on Friday demonstrated the problem vividly. According to CNN and the New York Times, Trump told McAleenan he would pardon him if he were jailed because he broke the law and denied asylum seekers entrance to the United States.

There's some question about whether Trump was joking about a possible pardon, but there's overwhelming reason to assume he's serious. He has already pardoned Sheriff Joe Arpaio, who was found in contempt of court for disobeying an order to stop racially profiling people he believed were immigrants.

These precedents amount to a dangerous formula — and an outright authoritarian one. It's clear Trump believes he can order people to break the law, refuse to listen to judges orders, and if the judicial branch tries to impose a penalty, he will pardon the charges away. This is how a president can impose his will unilaterally, in direct contradiction of the point of the Constitution.

In other areas, Trump is exercising his powers to undercut Congress' authority. His administration is refusing to hand his taxes over for review Congress as instructed, even though the law leaves no ambiguity about the fact that the Treasury secretary must comply with the request of the House Ways and Means Committee. And when House committees have requested documents from the White House to conduct basic government oversight, the White House has just outright ignored the requests.

Congress is supposed to be able to hold the president to account for these kinds of violations. But the one real tool it has to check the president's power is impeachment, which would necessarily require at least 20 Senate Republicans to be successful — and they've made it clear they're not interested in even broaching the subject.

Special Counsel Robert Mueller has produced a report that lays out the evidence for and against the idea that Trump abused his powers and obstructed justice in the course of the Russia investigation. He fired both the FBI director and the attorney general because he was not happy about an investigation into him and his circle.

But Attorney General Bill Barr, who Trump appointed after he had written a 19-page memo arguing that a president cannot obstruct justice with his executive powers, has already declared that the obstruction case in Mueller's report is unsupported. No matter what the report says — and it's expected to be released soon, with redactions by Barr himself — the attorney general's defense of Trump is almost guaranteed to protect him from a backlash in the Senate.

So the head of the Justice Department has concluded that, no matter how Trump abuses his powers, he can't be held criminally responsible. And Republican senators are sure to conclude that, if Trump's acts aren't criminal, they can't be impeachable either.

And yet, despite these leaps toward authoritarianism, Trump remains weak as a president. This fact helps explain the origin of some good-faith criticisms of the idea that Trump is at all authoritarian.

But the people who make this argument make a simple mistake.

Political scientist Corey Robin, for example, has argued that it's incorrect to warn about Trump's authoritarianism, given his myriad failures as president:

Yet that weakness has been evident from the beginning, as skeptics of the authoritarianism thesis, myself included, have argued. For last the two years, it hasn’t been a Democratic House but a GOP Congress that refused to give Trump money for his wall. Even with total control of the federal government, Trump never got an inch of that wall built. Nor was he able to get any legislation to restrict immigration.

Far from consolidating control over the GOP, much less the polity, Trump and his positions have been consistently rebuffed by the electorate, the Democrats, officials in the Executive branch and other parts of the government, members of his administration — as well as his own party. Indeed, Trump delivered budgets that were rejected not once but twice by a GOP-led Congress, yielding a spending package in 2018, in the words of The Atlantic, that would “make Barack Obama proud.”

An authoritarian is only able to come to power because the institutions allow it. And right now, the institutions are allowing Trump's authoritarian moves because the Republican Party is even weaker than he is. It holds veto power over the one mechanism to really hold him in check, an he knows it. And at the same time, because of the way the GOP has exploited and corrupted the rules of electoral politics, it is accountable to a narrower and more strategically circumscribe portion of the electorate — an electorate which, as it happens, is deluged with pro-administration propaganda in the form of Fox News.

It's not clear how bad this will get, and I'm not predicting that Trump is necessarily bound to become more authoritarian over time. He is weak, blundering, and often incompetent at basic tasks, so there's every reason to think he'll fail. At some point, the GOP may even tell him he went too far — it appears poised, for instance, to stop him from putting at least one crony on the Federal Reserve. The courts, too, can and do stand up to him.

But he has been moving in an authoritarian direction, pushing the boundaries of what he can get away with and circumventing the checks on his office when he can. And he's coming to better understand the levers of power at his disposal. We live in troubling times.