Sarah Sanders told investigators she lies to the press: Here’s how 6 key players in Trump’s orbit made out in the Mueller report 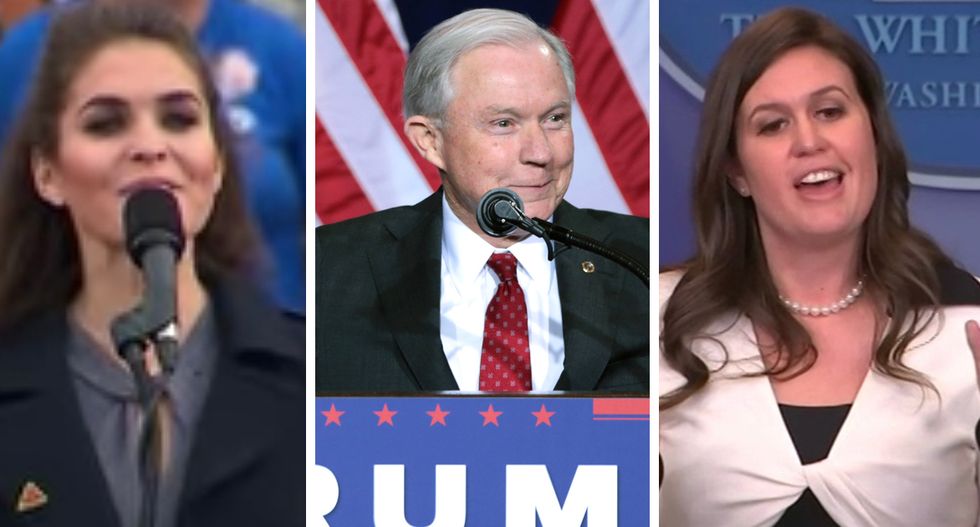 Attorney General William Barr has publicly released a redacted version of special counsel Robert Mueller’s final report for the Russia investigation. Despite the redactions, a wealth of information is in the report—and many of President Donald Trump’s past and present associates are discussed extensively.

Here’s what the Mueller report says about the roles of some key players and Trump associates.

On Page 101 of Mueller’s report, former Trump White House staffer Hope Hicks  is quoted as saying that e-mails in which Donald Trump, Jr. said, in 2016, that he would “love it” if Russia would leak some dirt on Hillary Clinton looked “really bad” for the president’s son. Mueller’s report states, “the President was insistent that he did not want to talk about it and said he did not want details.”

In March 2017, Attorney General Jeff Sessions, according to Mueller’s report, was assessing whether or not he should recuse himself from the Russia investigation. And Trump asked White House Counsel Don McGahn to stop Sessions from recusing himself; regardless, Sessions recused himself, and Trump was angry with him for that. Sessions’ recusal became an ongoing source of tension between himself and the president.

On June 17, 2017, Trump called McGahn at home and directed him to call the acting attorney general and tell him that Mueller “had conflicts of interest and must be removed.”

White House Press Secretary Sarah Huckabee Sanders, in 2017, told the press that after Trump fired James Comey as FBI director, she heard from “countless” FBI agents that they had lost confidence in Comey. But Sanders acknowledged to investigators that her comments were not based on anything.

Mueller’s report discusses the relationship between Steve Bannon and former Blackwater exec Erik Prince, who was an ardent supporter of Trump but wasn’t actually part of the campaign. Bannon and Prince were in touch during the campaign as well as during the Obama-to-Trump transition after Trump won the election. Mueller’s report says that “Prince and Bannon would discuss, inter alia, foreign policy issues and Prince’s recommendations regarding who should be appointed to fill key national security positions.”

As AlterNet reported earlier, investigators were unable to gather significant facts about a meeting between Bannon and Prince that occurred just before Prince met with a Russian hedge fund manager in Seychelles. According to the Mueller report, “text messages on both their phones have disappeared.”

Donald Trump, Jr. and Paul Manafort, Donald Trump’s campaign manager, were among those present at a June 2016 meeting at Trump Tower in New York City in which Trump’s allies discussed dirt that Russians had on Hillary Clinton. According to the Mueller report, “by June 2017, the president became aware of e-mails setting up the June 9, 2016 meeting between senior campaign officials and Russians who offered derogatory information on Hillary Clinton as ‘part of Russia and its government’s support for Mr. Trump.’”

Mueller’s report adds that “on multiple occasions in late June and early July 2017, the president directed aides not to publicly disclose the e-mails, and he then dictated a statement about the meeting to be issued by Donald Trump Jr. describing the meeting as about adoption.”