Robert Reich: Here's everything you need to know about the new economy 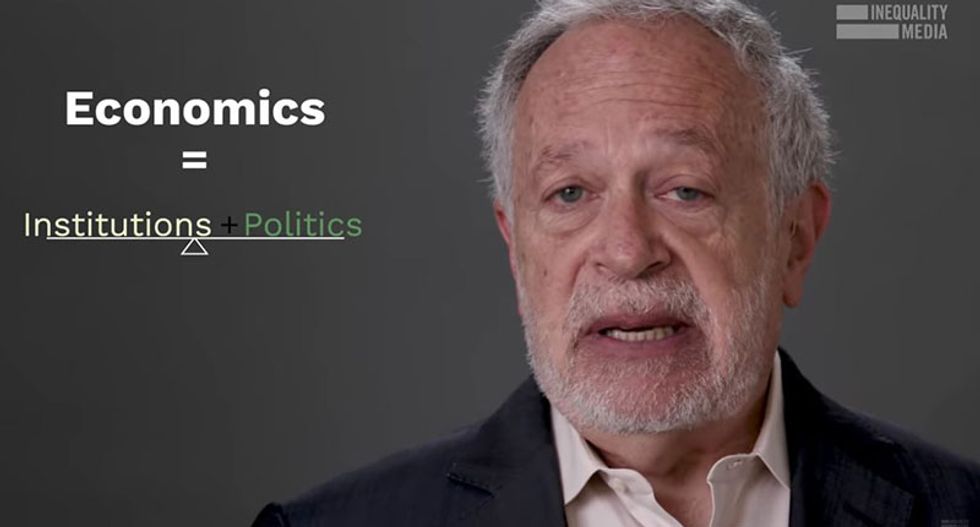 The biggest economic story of our times isn’t about supply and demand.  It’s about institutions and politics.  It’s about power.

Now this is broadly known, but there is less certainty about why.

Conventional wisdom attributes the widening economic divide to globalization and technological change – the “inevitable” result of the invisible hand of the so-called “free market.”

So, according to this conventional view, the only realistic way to raise the wages of most Americans is to give them more and better education and job training, so they can become more competitive. They can thereby overcome the so-called “skills gap” that keeps them from taking the jobs of the future – jobs and opportunities generated by new technologies.

2.  A Deeper View of the American Political Economy

To understand what really happened, it’s critical to understand that there is no “free market” in nature. The term “free market” suggests outcomes are objectively fair and that any “intervention” in the free market is somehow “unnatural.” But in reality, markets cannot exist without people constructing them. Markets depend on rules, and rules come out of legislatures, executive agencies, and courts.  The biggest political change over the last four decades is the overwhelming dominance of big money in politics – influencing what those rules are to be.

3. The Decline of Countervailing Power

Now, go back to the first three decades after World War II – a period that coupled the greatest economic expansion the world has ever seen with the creation of the largest middle class the world has ever witnessed. The great economic thinker John Kenneth Galbraith asked at the time: Why is capitalism working so well for so many?

His answer was as surprising as it was obvious: American capitalism contained hidden pools of what he called “countervailing power” that offset the power of large corporations, Wall Street, and the wealthy: labor unions, state and local banks, farm cooperatives, and small retail chains, for example. All of these sources of countervailing power had been fostered by the New Deal. They balanced the American economic system.

But since the late 1970s, these sources of countervailing power have been decimated, leading to an unbalanced system and producing widening economic inequality and stagnating wages. The result has become a vicious cycle in which big money – emanating from big corporations, Wall Street, and the wealthy – determine the rules of the economic game, and those rules generate more money at the top.

Consider, for example, the ever-expanding tax cuts or loopholes for large corporations, the financial sector, and the wealthy. Contrast them with increases in payroll taxes for average workers.

Or look at the bank and corporate bailouts but little or no help for homeowners caught in the downdraft of the Great Recession.

Finally, look at the increasing barriers to labor unions, such as the proliferation of so-called “right-to-work” laws and the simultaneous erosion of antitrust and the emergence of large concentrations of corporate power.

The public knows the game is rigged, which is why almost all the political energy is now anti-establishment. This is a big reason why Trump won the 2016 election. Authoritarian populists through history have used anger and directed it at racial and ethnic minorities and foreigners.

It’s also a big reason why the only alternative to authoritarian populism is progressive populism – countervailing the moneyed interests with a democracy that reorganizes the market to benefit the many rather than a small group at the top.

How do we build a new countervailing power and move toward a new progressive economics?

The choice isn’t between a free market and government. The question is who has the power to organize the market, and for whom.

Stagnant wages, job insecurity, widening inequality, and mounting wealth at the top are the result of political choices. The system is rigged and must be un-rigged.

Conventional economics posits that the most important goals are efficiency and economic growth. But policies can be “efficient” by making the rich even wealthier as long as no one else is worse off – and that won’t remedy what’s happened. Economic growth is meaningless if the gains from growth keep going to the top and nothing trickles down.

Stop assuming that all that’s needed is better education and job training. Sure, Americans need access to better schools and skills, but the basic problem isn’t simply a “skills gap.” It’s a market that’s organized to push more income and wealth toward the top, rather than distribute it broadly.

Stop aiming to “redistribute” from richer to poorer after the market has distributed income. Instead, change the organization of the market so that a fair pre-distribution occurs inside it.

Stop thinking that the goal is only to create more jobs. America’s real jobs crisis is a scarcity of good jobs.

The American economy cannot generate widespread prosperity without a large and growing middle class whose spending fuels the economy.

5. Building a Multi-racial, Multi-ethnic, Coalition of the Middle Class, Working Class, and Poor.

Don’t let the moneyed interests divide and conquer along racial and gender lines. Racism and sexism are very real issues within our economic system, and they are often exploited to keep us from realizing the power we can have when we stand together. All are disempowered by the moneyed interests, and all have a stake in rebuilding countervailing power.

6. Offering a Compelling Set of Ideas about What Should be Done with Countervailing Power.

— A guaranteed basic income so no one is impoverished,

— A guaranteed job so everyone can get ahead,

— A progressive wealth tax to pay for these and other basics,

— New forms of corporate organization so workers have more voice,

–  A Green New Deal so workers can get better jobs while fighting climate change.

— Reinvigorated antitrust so concentrations of economic power are broken up,

— Election finance reforms to get big money out of politics and end the revolving door,

7. Building the leadership for this new countervailing power.

You can help lead the way. You can be a leader of this movement. How?

For one, you can run for office – in your community, say, city council or school board. Or run for state office. Or even national office.

Don’t be intimidated by politics. We need good people to run. And don’t worry that you’ll be beholden to a handful of rich donors. These days, smaller donors are more active than ever.

So, what’s the secret? Tell it like it is and be yourself. And then, as I’ve said, talk about economics in terms of political power and understand the 7 principles. Build countervailing power through a multi-racial, multi-ethnic coalition. And offer a compelling set of ideas about what can and should be done.

But you don’t need to hold formal office to be a leader.

You can be a leader by organizing and mobilizing people: Your co-workers – to form a union. Your friends and neighbors – to push for better roads and schools, and fairer local taxes. People at your church or synagogue or mosque – to demand better treatment of the poor, the elderly, children, immigrants. You can link your group up with other groups pursuing similar ends, and create a movement. That’s how we got the Civil Rights and Voting Rights Acts. How we got marriage equality. It’s how we get good people elected.

The key to organizing and mobilizing is creating a leadership team, and then reaching out systematically to others, giving them tasks and responsibilities, starting small and gaining a few victories so people can feel their power, and then growing from there.

You’ll need to be patient and steadfast. Keep people together and focused. And be careful not to burn out. Organizing and mobilizing is hard, but once organized and mobilized, there’s no end to what people can accomplish.

You can also be a leader by uncovering critical information, fighting lies, spreading the truth. Core responsibilities of leadership are revealing the facts about widening inequalities of income, wealth, and political power – and uncovering their consequences.

A century ago they were called “muckrakers.” More recently, investigative reporters. I’m talking about courageous journalists who speak truth to power.

But this form of leadership isn’t limited to reporters. It includes whistleblowers, who alert the public to abuses of power. And here courage is also required because when you blow the whistle on the powerful, the powerful sometimes strike back.

This form of leadership also includes researchers, who dig up new sources of data and analyze them in ways that enlighten and motivate.

In other words, there isn’t just one path to leadership. Whether you seek formal authority by running and gaining public office, or you organize and mobilize people into being effective advocates, or you discover and spread the truth – you are creating and developing countervailing power to spread the gains of the economy and strengthen our democracy.

These are worthy and noble objectives. They are worth your time. They can be worth a lifetime.