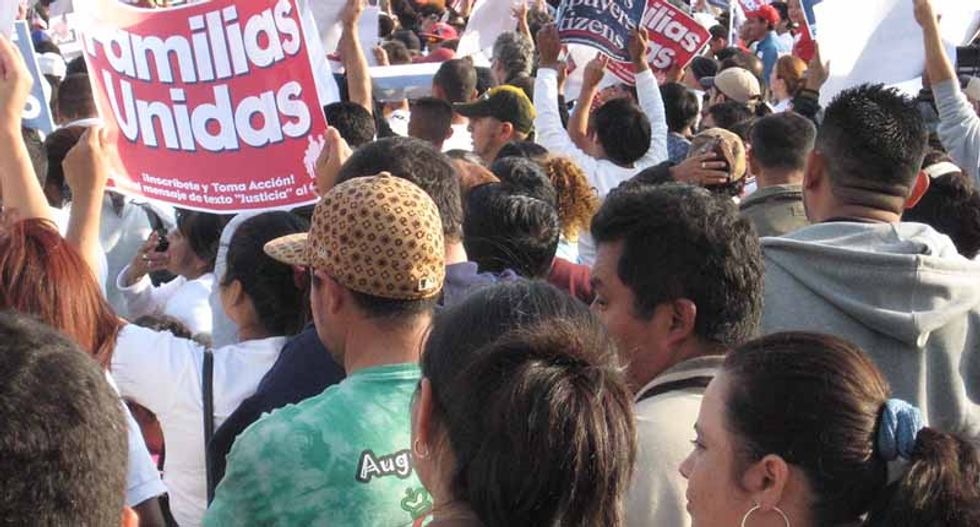 In a move immigrant rights groups decried as the White House's latest inhumane attack on those fleeing violence and persecution, President Donald Trump late Monday ordered sweeping changes to the U.S. asylum system, including restriction of work permits and a fee for asylum applications.

"Once again, he's hell bent on persecuting the most vulnerable and gives access to lifesaving refuge only to those who can afford it," tweeted advocacy group Voto Latino.

Under Trump's directive, detailed in a presidential memorandum released Monday night, asylum seekers who come to the U.S. outside of official ports of entry would be denied work permits.

Trump also moved to impose fees on asylum applicants and ordered that all asylum cases be settled within 180 days.

The president gave his administration 90 days to craft regulations that would carry out his proposed changes.

"Our country is not a Trump hotel. It does not 'fill up,' and you do not have to pay a fee to enter and remain. The Statue of Liberty is not a toll booth," the group added. "We are more than malicious executive orders aimed at the most vulnerable, and in 2020 we will be heard."

Other immigrant rights groups and commentators voiced similar outrage at Trump's plan to hit asylum seekers with a fee to seek refuge in the United States.

It isn’t the first time that Trump has called for this. Charging asylum application fees puts a dollar amount on he… https://t.co/cFahORC5ah
— Jamil Smith (@Jamil Smith) 1556588360.0

Trump's order comes amid an ongoing "purge" at the Department of Homeland Security, where the president is giving xenophobic hardliners like senior adviser Stephen Miller more power over immigration policy.

Michelle Brané, director of migrant rights and justice at the Women's Refugee Commission, told the New York Times that the president's new directive would turn "asylum on its head."

"The entire idea of asylum is that it's something that you need because you are fleeing some sort of violence or persecution, and to then say that it's only accessible to people who can pay a fee doesn't make sense," said  Brané.