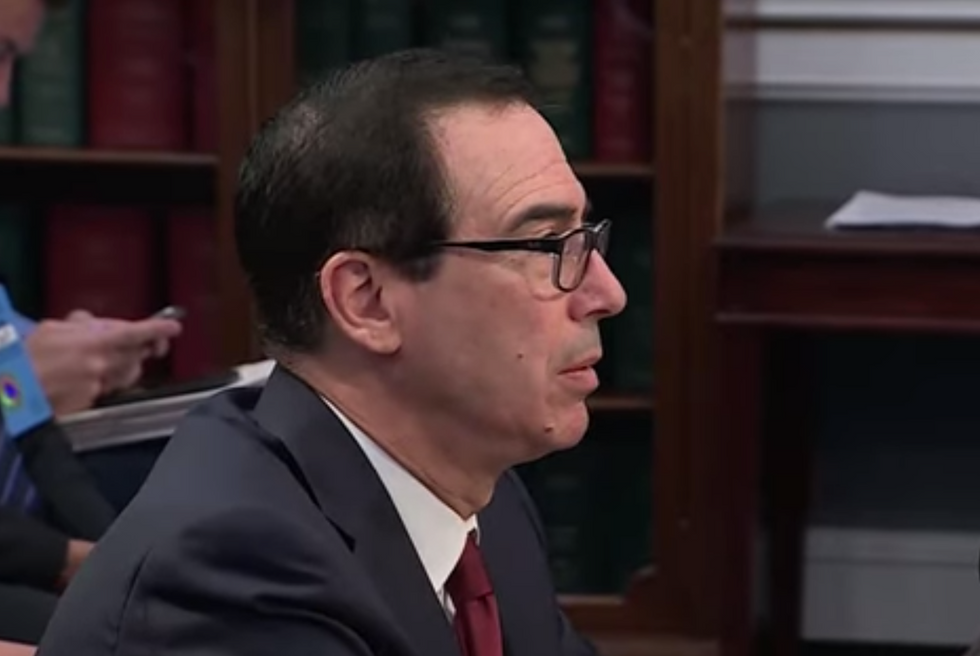 Treasury Secretary Steve Mnuchin sent a letter to Congress Wednesday saying he will miss the deadline for handing over President Donald Trump's tax returns, as instructed, despite clear statutory language giving the IRS no option in the matter.

It was notable in itself that Mnuchin responded to the request, rather than IRS Commissioner Charles Rettig. Officially, the duty of handing over the tax returns has been delegating to the IRS commissioner from the secretary, and that delegation has not been reversed.

But testifying before Congress on Wednesday, Rettig refused to say that it was his responsibility alone to respond to the congressional instruction, which was sent by House Ways and Means Committee Chair Richard Neal (D-MA). This refusal foreshadowed Mnuchin's intervention.

In the letter, Mnuchin said his department has "begun consultations with the Department of Justice to ensure that our response is fully consistent with the law and the Constitution," and it will miss the April 10 deadline set by Neal.

"Lawless," tweeted writer Jennifer Rubin of the denial. "Issue a subpoena and take them to court."

Former federal prosecutor Harry Litman has pointed out in the Washington Post:

The law that permits Neal, as head of Ways and Means, to receive Trump’s returns is simple and clear: 26 U.S.C. §6103(f) specifies that “upon written request from the chairman of the Committee on Ways and Means of the House of Representatives … the Secretary [of the Treasury] shallfurnish such committee with any return or return information specified in such request.” The return is furnished in closed executive session.

“Shall” means, well, shall. The language is the well-established norm, across a range of legal settings, used to denote an absence of discretion on an official’s part. It leaves no room for quibbles by the secretary.

In other words, there's no need to consult with the Justice Department. The law is clear.

Mnuchin's letter tries to throw up smoke and mirrors about why the request might be improper:

In the last Congress, the Committee on Ways and Means issued a formal report concerning a House resolution of inquiry seeking information substantially similar to the information you request. The Committee determined that such a request would be an “abuse of authority” and “set a dangerous precedent by targeting a single individual’s confidential tax returns and associated financial documents for disclosure” for political reasons. The Committee recognized that section 6103(f) may not be used “for purposes of embarrassing or attacking political figures of another party.” Noting a similar concern in a recent floor speech, the Chairman of the Senate Finance Committee—who shares the same section 6103(f) authority as you—described the April 3 request as lacking the requisite “legitimate legislative purpose” and as “Nixonian to the core.”

But this is all beside the point. Neal requested the returns on the basis that he wants to review the procedure for the routine audits of presidents. But there's no credible argument to think he even needs this reason. The law says that if he wants the taxes, he should get them. Mnuchin may think it is improper or inappropriate — but his refusing to hand over the tax returns would actually violate the law.

The invocation of President Richard Nixon in defense of Trump is particularly egregious. The practice of presidential candidates making tax returns public, which Trump promised to uphold and then broke, started after Nixon as an anti-corruption measure.

Speaking to the House Financial Services Committee on Tuesday, Mnuchin claimed that he has never discussed the possibility of a request for Trump's taxes with the president or the White House. However, he said that the department's lawyers had discussed the possibility with the White House general counsel before the request was sent. He also said that he will "follow the law."