Is Kyrsten Sinema becoming the Joe Manchin of the West? 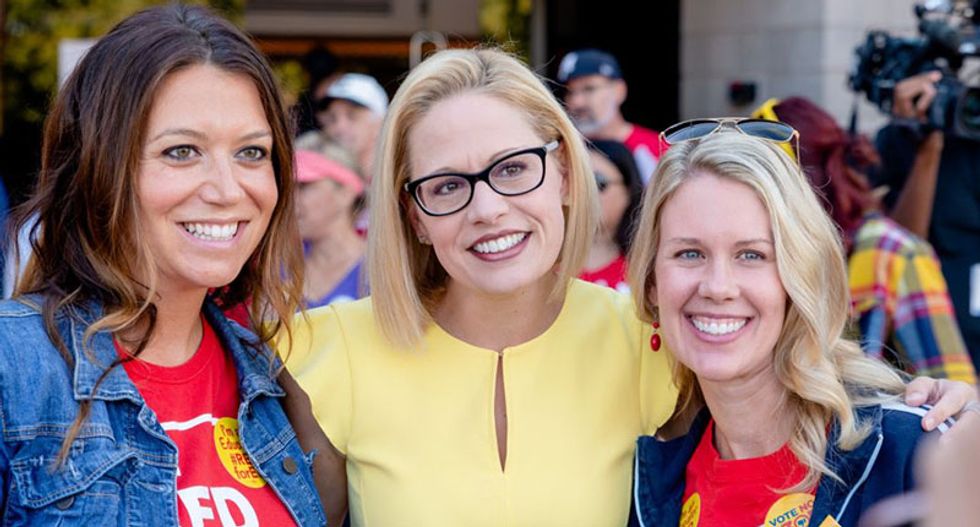 The 2018 blue wave did a lot to energize the liberal/progressive wing of the Democratic Party. Unapologetically left-of-center candidates like Rep. Alexandria Ocasio-Cortez, Rep. Rashida Tlaib and Rep. Ilhan Omar were elected to the U.S. House of Representatives, and Bernie Sanders ally John Fetterman became lieutenant governor of Pennsylvania. But there were many centrist Democratic victories as well in 2018; one of the biggest was Sen. Kyrsten Sinema’s narrow victory over Republican Martha McSally in Arizona, where Sinema took over a U.S. Senate seat that had been in Republican hands for decades.

Sinema has a way of infuriating far-right culture warriors, who are deeply troubled by the fact that she is openly bisexual and by her fondness for wearing thigh-high boots on the Senate floor. But Sinema’s overall voting record during her three months in the Senate has been quite centrist, and if she were a politician in the U.K., she would probably fit in with the Conservative Party or be a Tory.

The 42-year-old Sinema doesn’t get really high marks from right-wing organizations, although she fares better than many other Democrats. The National Rifle Association (NRA) has given her a 33% favorability rating. The Goldwater Institute gave Sinema a 35% favorable rating in 2010, and according to FiveThirtyEight, she was voting in line with Trump 58% of the time in March—which is how often Sen. Joe Manchin (widely regarded as the most pro-Trump Democrat in the Senate) was voting with Trump. In contrast, Ocasio-Cortez was voting with Trump only 13.6% of the time.

Here are some of Sinema’s more conservative or centrist votes or positions.

1. Sinema supports Obamacare but opposes single payer or Medicare for all

Arizona Republicans and Tea Party activists in Arizona have described Sinema as “far left,” but her record doesn’t bear that out by any means. During her victory speech in November, it wasn’t Sen. Bernie Sanders who Sinema praised—but rather, the late Sen. John McCain. Sinema is liberal on social issues, including gay rights and abortion (she receives a 100% rating from Planned Parenthood). Yet in other areas, she is shaping up to be the Joe Manchin of the west.

When she was serving in the House of Representatives, Sinema voted against repealing the Affordable Care Act of 2010, a.k.a. Obamacare. She favors universal healthcare via expanding the ACA but opposes the type of single payer or Medicare-for-all program that Sanders and Ocasio-Cortez have been fighting for.

Many Democrats in the Senate voted against confirming Trump nominee William Barr as attorney general. But Sinema was among the Blue Dog Democrats who voted for Barr’s confirmation; others included Sen. Joe Manchin and Alabama Sen. Doug Jones.

4. Sinema has been criticized by net neutrality activists

In March, the pro-net neutrality group Fight for the Future criticized Sinema for not signing on to the Save the Internet Act and complained that she was “siding with corporate donors to kill net neutrality so you pay more for worse Internet.”

President Trump and his carnival barkers at Fox News often describe the Democratic Party as having moved the far left, which is nonsense. The rise of Sanders admirers like Ocasio-Cortez and Tlaib doesn’t mean that the entire party is staunchly to the left, but rather, simply means that liberals and progressives now have a larger voice within the party.

The centrist Blue Dog wing of the Democratic Party hardly disappeared in the 2018 midterms. The Democratic Party is still a big tent, and judging from her voting record in 2019, Sinema is shaping up to be one of the biggest swing votes in the United States Senate.