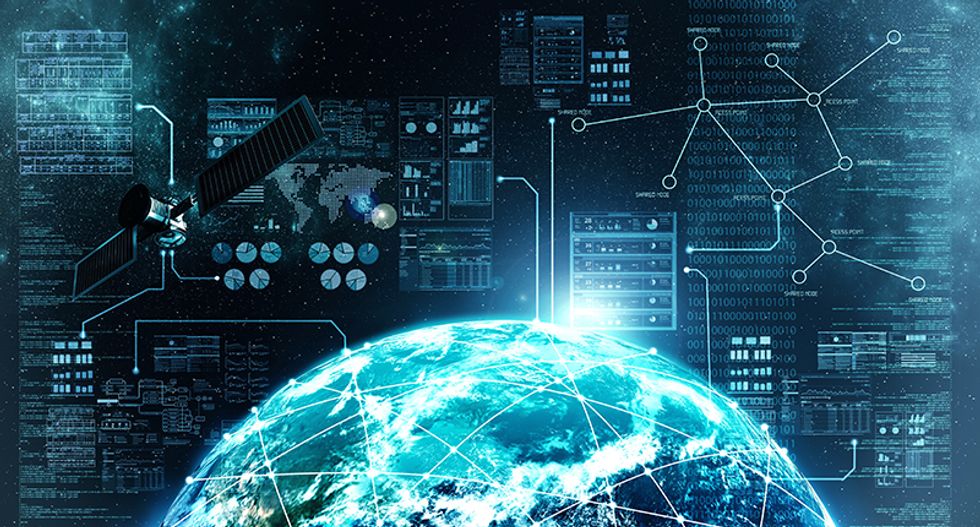 The internet is an ethereal concept. The language we use to describe it contributes to that etherealness: we speak of servers being in "the cloud," as though they were weightless in heaven, and most if not all of our internet access happens wirelessly. Indeed, for most Americans, the internet has little physicality at all anymore: it is probable that you’re reading this article via the miracle of a wireless signal, either wi-fi or cell.

Yet even if the last kilometer of this article’s journey happened through the wireless ether, the rest of its path from my computer to servers to you was achieved via wires. Lots and lots of wires. And even as our dependence on wireless internet grows — as we fill our house with wi-fi–enabled smart devices that communicate with servers all over the world — the need for wires undergirding that system grows exponentially.

Susan Crawford, the author of “Fiber: The Coming Tech Revolution—And Why America Might Miss It,” has spent years studying the business of these underground fiber optic cables that make fast internet possible. As it turns out, the internet infrastructure situation in the United States is almost hopelessly compromised by the oligopolistic telecom industry, which, due to lack of competition and deregulation, is hesitant to invest in their aging infrastructure. “That would never happen," Crawford told me. "We saw that with electricity. We’ve seen it with internet access in America already.”

This is going to pose a huge problem for the future, Crawford warns, noting that politicians as well as the telecom industry are largely inept when it comes to prepping us for a well-connected future. I spoke with Crawford via phone about her new book and the myriad problems with internet infrastructure in the US. This interview has been edited for clarity.

Keith A. Spencer: You analogize the situation with fiber-optic lines to the history of electrification. Can you elaborate on that comparison?

Susan Crawford: When electricity was young, it was viewed as a luxury, and so, initially it was only for municipal buildings and street cars, very gradually moving to very rich [people’s] houses. There’s a story in the book about the richest house in San Francisco finally getting electric lights. Then only because of FDR did electricity go out into rural regions.

In the middle of that story, a lot of locals — thousands of them and cooperatives across the country — took matters into their own hands, and decided they were fed up with this cartel and decided to build their own electricity network.

We’re at that point in the story with internet: 800 communities and cooperatives across the country have, or are in the process of, building fiber networks. They understand the phase change that fiber plus advanced wireless represents.

Eventually, this activity is going to shame the federal government in action. It’s interesting to see both Mr. Trump and Mr. [Newt] Gingrich saying we have to do this for our national competitiveness. They are right, but they are probably right for the wrong reasons. They’re probably thinking that [they need] to give a series of subsidies to the existing status quo players. This isn’t necessary and we know that leads to divided market, unbelievably high prices, and a lot of people being left out.

Now, having [internet] is as crucial as having clean water or electricity or [a] sewage system — every American deserves and needs [it]. Basically, an unlimited data connection is necessary for participating in the 21st century… [but] to get there, we’ll need more fiber.

It’s a weird thing today, Keith, Newt Gingrich and the President are saying the same thing. There’s a Newsweek piece right now this week about [Trump] talking about the need for carrier-neutral 5G around the country and how important it is. To do that, you need to have fiber everywhere, and the fiber has to be opened to a lot of competition.

That’s interesting that Republicans like Newt Gingrich are into fiber. Tell me if this is accurate: does Newt Gingrich see the barrier to fast internet as there being not enough competition in the marketplace? As opposed to your critique, the left critique, which I’m understanding is that there is too much power is concentrated in an oligopoly of telecom companies, and/or that there isn’t enough municipal power… and this is something that should be regulated more as a utility rather than a private good?

So he’s missing a few steps, and also what he’s suggesting is that private companies will sort of magically do this all on their own. That would never happen. We saw that with electricity. We’ve seen it with internet access in America already.

Right. Tell me more about how the telecom corporations prevent this shift from happening and what they’re doing to keep our American internet infrastructure slower and worse than it could be.

The decay started in 2004 when — maybe out of gullibility, maybe out of naivety, maybe out of calculation —then-chairman of the FCC, Michael Powell — now the head of cable association — was persuaded that the telcos would battle it out with the cable companies, that their cable modem services would battle it out with wireless, and all of that competition would do a much better job than any regulatory structure could at ensuring that every American had a cheap and fantastic connection of the internet. That’s just turned out that’s just not true.

Since then, he deregulated the entire sector — and as a result, we got this very stagnant status quo where in most urban areas — usually the local cable monopoly has a lock in the market and can charge whatever it wants for whatever type of quality services they're providing, leaving a lot of people out…. poor people, people of color in urban areas. And the rural situation is especially dire. It’s an issue that probably isn’t on most politicians’ radar screens.

There’s a Microsoft study from a couple of months ago saying somewhere between half and third of Americans don’t actually use what would qualify as even a very slow high-speed internet access connection. I believe a lot of that is from high prices.

[Editor’s note: the New York Times writeup of the study says: "162.8 million people do not use the internet at broadband speeds, while the F.C.C. says broadband is not available to 24.7 million Americans.”]

That’s the story. It’s a failure of leadership, imagination, and technology. The lack of regulation makes things worse, and the private market isn’t providing high-speed internet.

Why is it that so many people have only one choice for internet in the United States?

Well, there’s no oversight, and then this infrastructure is very expensive to build, and so it only makes sense to control whole markets so that you can monetize the hell of whatever you built. The companies have consolidated, and they can easily swap systems to each other tacitly or explicitly. You only need back office operations for your particular geographic area; when it comes to communications infrastructure and oversight, private players will routinely consolidate and divide markets so as to control a rational portion for themselves and lower their per-unit cost.

These companies aren’t evil. It’s just that we have left them unrestrained.

Today, we’ve sort of fallen in love with the idea that shareholders and profit-making are the only ideologies we value, and that somehow by some magical elixir this is all going to work out. When it comes to internet access, the situation is amplified because of the absence of good data on the price of internet access at any particular location in America, and its availability. In the absence of oversight — and as a result, complete absence of competition — this is what happens with very expensive, effectively natural monopolies like communications infrastructure.

To ask a bigger ideological question, I’m curious about the tendency of all these telecom companies to vertically integrate. Comcast, for instance, owns NBC and Universal pictures, so it produces content. Then it’s involved in distribution – it sells cable TV and internet. And then it owns the wires underground, too, that the data flows through.

What they’re doing is building a castle and then putting a big moat around it — so it’s un-sailable, so that no startups will rise up and compete. So, if you're in Philadelphia and you wanted to start a rival cable system with the Comcast, you probably need access to local sports. Comcast owns all the local sports content, or it owns programming that you can’t get access to except through them. Or maybe content that you can’t live without, like “Game of Thrones.” So AT&T owns [“Games of Thrones” producer] HBO, and HBO is their premier source for great new television.

What this does is allow them to use that content as a sledgehammer. It keeps any distribution competition at bay. The telecom startups just won’t be able to afford to pay for content people must have, in addition to just their data connection.

The other thing that’s going on at the same time is that Comcast is sort of playing both games… so they bought Sky, and that’s so that they can develop premium, exclusive content. That’s their goal with that purchase. At the same time, they’re making all of their profits these days on raising prices on their data service. They’re calling it their connectivity-centric idea. To the extent that anybody else is making money sending content over Comcast’s wires, Comcast can try to capture a portion of that by charging consumers ever more for more data. That make sense?

Businesspeople always fear, “oh my god, [consumers] are cutting the cord, that means trouble for Comcast.” No, it doesn’t, because all that Comcast has to do — in its footprint, in its physical areas where it has data connections — is just charge more per subscriber. People slowly get used to it. We’re like frogs being boiled in water.

This whole story is little understood by the American public. I have no clients and no consulting relationships, and my whole goal with these books is to make it so everyone understands what’s actually going on. Because Americans don’t travel, you don’t get the sense of what a third-world country the US is becoming when it comes to communications.