Gore Vidal once said conservative Republicans aren't a political party — they're fascists. Was he right? 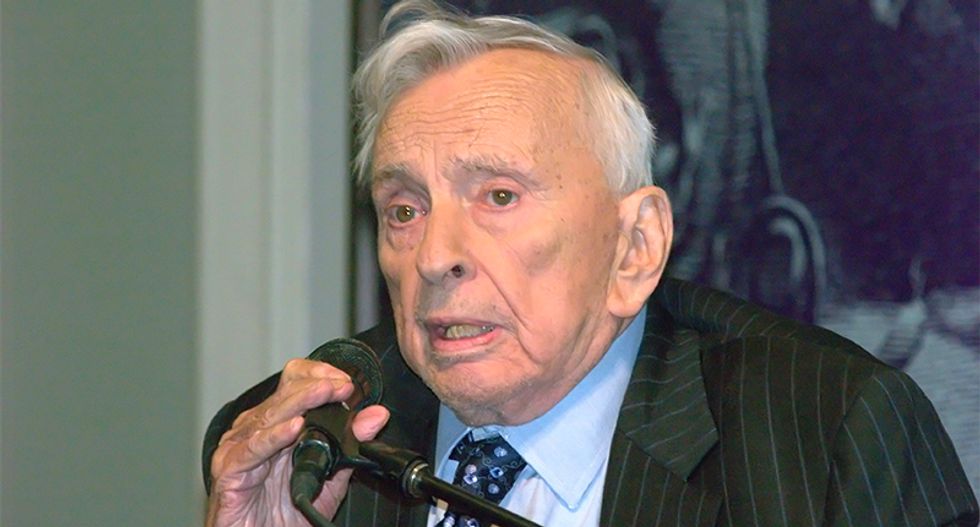 American society is failing at the most essential covenant of any civilization; that is, the identification and elimination of movements that threaten the very essence of civilization. It is a challenge to any journalist, no matter how committed and observant, to monitor all of the horrific, ignorant and false utterances that President Donald Trump projectile vomits at the American people on a daily basis, but one of his recent verbal explosions demonstrates dangerous flirtation with the other “f” word that the FCC has, evidently, prohibited from the television news — “fascism.”

On Wednesday, April 10, Trump promised to send more armed troops to the U.S.-Mexico border in an attempt to vanquish the nonexistent threat of immigrants seeking asylum. Noam Chomsky once remarked that it would require a stunning combination of “cowardice and lunacy” to believe Ronald Reagan’s lies about Nicaraguan subversives located just a “two days drive away from Texas.” Chomsky was correct, if not too kind, but at least Reagan was referring to armed militants. Trump speaks only of poor people, the majority of whom are women and children, escaping starvation and death squads in their home countries.

To further his effort of personifying the phrase, “just when you think it can’t get worse,” Trump then expressed sadness and anger that the military cannot physically attack asylum seekers, saying, “Our military, don’t forget, can’t act like a military would act. Because if they got a little rough, everybody would go crazy.”

No reporter asked Trump to clarify his remarks. Would Trump like to exercise his authority as commander-in-chief to order a massacre of migrants? Or would he feel content with merely a mass assault — a few well-trained soldiers clubbing asylum seekers over their heads?

The inability or refusal to tell the truth, and accurately name the animating force behind the Trump movement in American politics, indicts the entire American press as declawed and defanged, and exposes an alarming, and possibly fatal, strain of apathy among the American public.

To call this anything but fascism, especially in the aftermath of Trump’s degradation of immigrants as “animals” in 2018, and his family separation policy under which children were put in cages, often after ICE officers ripped them out of their mothers’ arms, is a dereliction of journalistic responsibility, and a violation of everything that is elemental to democracy.

The inability or refusal to tell the truth, and accurately name the animating force behind the Trump movement in American politics, indicts the entire American press as declawed and defanged, and exposes an alarming, and possibly fatal, strain of apathy among the American public.

As inspiring and reassuring as the Democratic midterm victory and the surge in activism are to those of us with any sense of loyalty to the common good, relatively few Americans are acting as if they realize that much of what they take for granted in their society is at stake.

A multicultural democracy cannot peacefully coexist with white nationalism. In the past month, not only has the President expressed the desire to slaughter migrants at the border, he has also all but begged someone to murder a sitting member of Congress.

Congresswoman Ilhan Omar is an essential voice of realism in the United States Congress. A Somali refugee who fought a language barrier and culture of bigotry to earn academic expertise in political science and a seat in the House of Representatives, she is intimately aware of the contradictions of American power. In much of the world, especially nations with predominantly Muslim populations, America is not a Messianic aid of freedom and justice, but an invading army, a drone strike regime, and imperial instrument of destruction.

Her mere presence in federal government — wearing the hijab and offering bold and clear rebuttals to America’s self-serving myth of its own benevolence — has provoked Republicans into revealing the loathsome extent of their derangement.

President Trump continually questions her loyalty to America and insinuates that she sympathizes with jihadi terrorism, Fox News hosts accuse of her anti-Semitism and adherence to Sharia Law, and Rep. Dan Crenshaw has dedicated himself not to the needs of his Texas district but to asserting bad faith interpretations of nearly every argument Omar advances. Researchers have discovered that Crenshaw, before winning election, was an administrator of an Islamophobic Facebook group that, among other high marks, shared a photo of a mushroom cloud with a caption calling for the eradication of the “cancer” that is Islam.

The mad dog buffoonery and hatred of Trump and Crenshaw is the defining characteristic of the Republican Party, and it provides overt encouragement to the growing movement of right wing extremism in the United States, a movement that is responsible for two-thirds of the terrorist incidents within American borders since 2017.

Meanwhile, the mainline press is still running sympathetic profiles of cultish Trump supporters, including those with neo-Nazi affiliations, and covering the presidential race with typical acuity, focusing on whether or not Amy Klobuchar ate a salad with a comb, the charisma of Beto O’Rourke when he stands on tables, and the implications of Bernie Sanders earning a million dollars from book sales.

More than 40 percent of Americans still approve of Trump’s performance as president, and his violent language does little to elicit outrage from anyone except the Democratic base and a handful of a genuine conservatives — men and women who, despite the political failures of their ideology, do showcase some fidelity to the Constitution.

As for the overwhelming majority of the right wing, the late Gore Vidal summarized them best when he described why President Obama so often fell short in his contention with the GOP: “Obama believes the Republican Party is a political party when in fact it’s a mindset, like Hitler Youth, based on hatred — religious hatred, racial hatred. When you foreigners,” he continued with a British interviewer, “hear the word ‘conservative’ you think of kindly old men hunting foxes. They’re not, they’re fascists.”

A common criticism of Vidal in his twilight years was that his politics and rhetoric became too strident and extreme. Trump and his supporters have proved him prescient. Let us all hope that the country soon catches up.
From Your Site Articles
Report typos and corrections to: feedback@alternet.org.
#story_page_post_article