Fox News correspondent gets skewered for wearing a tactical vest at the border: 'Thinks he’s headed to a war zone' 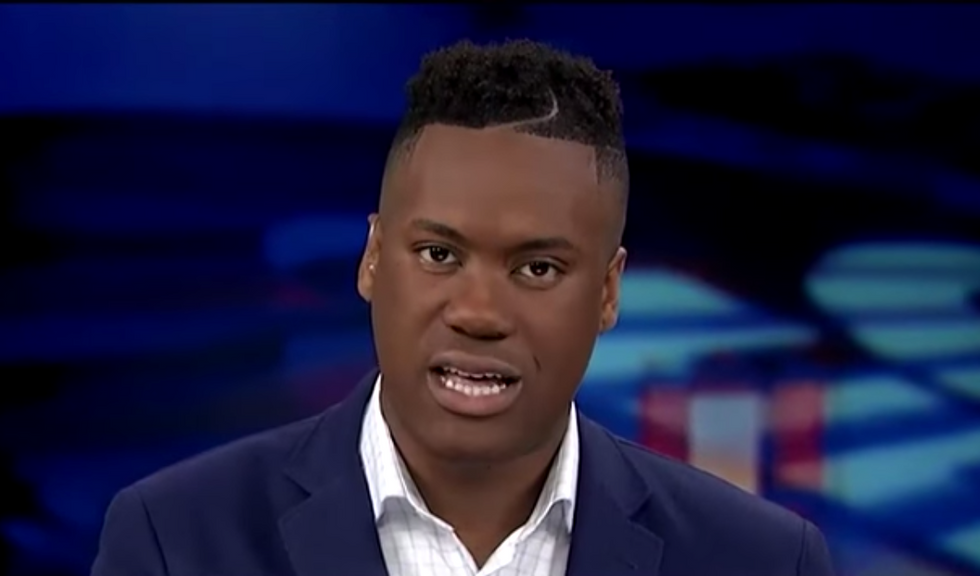 While shooting a segment for Fox News at the border on Thursday, correspondent Lawrence Jones wore what appeared to be a tactical vest while on camera, as he showed in a picture posted to Twitter:

It's not clear exactly what the point of the vest was; while some speculated that it may be bulletproof, it covered a relatively small part of his chest, meaning it would be pretty ineffective if it were supposed to protect him from armed attackers. He said that border agents had asked him to wear it — without explaining why — but many critics argued it was part of an effort to exaggerate the dangers at the border.

"Did I say it was a war zone or did you ignorantly assume that because I was wearing a vest?" Jones shot back. "Bottom line: CBP instructed me to put on one of their vests during my ride along. Period."

But he did not explain why the border agents would want him to wear it or what benefits it provided. And it's possible the border agents have as much interest in exaggerating the dangers of the area as Fox News does.

And MSNBC correspondent Jacob Soboroff, who has reported extensively on the border, found Jones' explanation absurd.

"This is totally ridiculous," Soboroff said in a tweet. "I have never once worn a bulletproof vest at the border, nor has CBP ever asked me to -- even while on a chase with Border Patrol to apprehend migrants in remote Arizona desert in the middle of the night."

It may seem like a petty debate, but it reflects a real tension in media and the country. President Donald Trump, many Republicans, and conservative media are fighting hard to portray immigration as a serious threat to the country and the border as a major site of conflict for the U.S. government — a narrative that helps justify some of the administration's worst policies. It also reflects the president's core beliefs about governance and politics — as once expressed to reporter Bob Woodward — that "fear" is the foundation of power.

There is a real crisis at the border — but it's not the one Trump conceives when using it to declare a national emergency. That declaration was used to siphon military funds for a border wall, but the wall will do nothing to address the plight of migrants seeking refuge and claiming asylum at the U.S. border, which they can do at ports of entry. They don't present a threat to the United States, but they are fleeing one. And the American government's reaction — to treat the newcomers as an invading force, requiring a quasi-military response — only escalates the crisis rather than solving it.