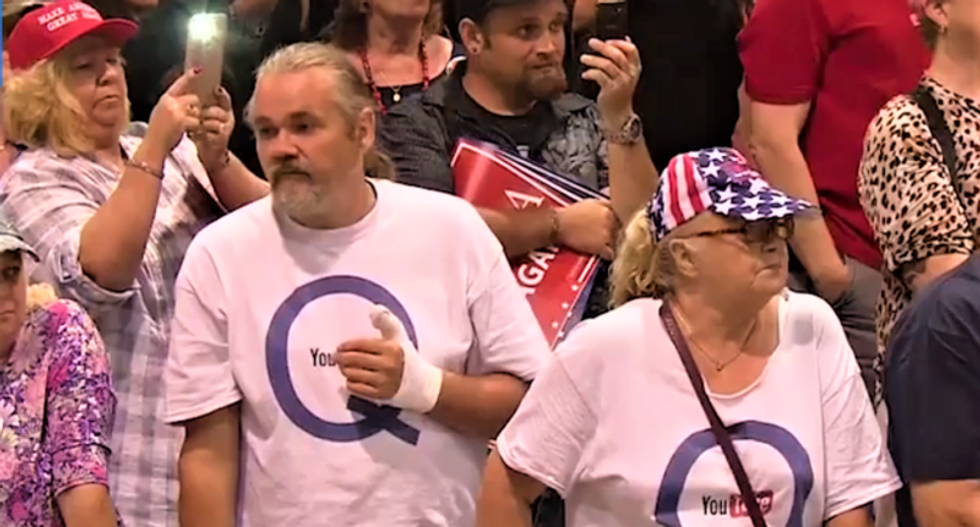 A Florida bookseller appears to be the first QAnon follower to run for Congress -- and is currently the only Republican seeking to challenge incumbent Rep. Al Lawson, a Democrat.

Matthew Lusk is the first Republican to declare his candidacy in Florida’s 5th congressional district, Florida Politics reported. That may be because Republicans believe they have no chance: The district stretches from Orlando to Jacksonville in an awkward curlicue through central and northern Florida, and was evidently engineered to have a majority African American population. Lawson was elected last November with 66.8 percent of the vote.

“I belong to no secret societies or clubs, Q is one of my issues because it’s definitely a leak from high places,” Lusk told the outlet. “I follow Q, but I don’t know who or what Q is.”

QAnon, a bizarre pro-Trump conspiracy theory born out of anonymous postings on the far-right forum 4chan, posits that a high-level government insider who goes by “Q” is leaking clues to Trump supporters about what is really going on in the deep state. The conspiracy theory involves outlandish claims that Hillary Clinton and other high-profile Democrats are part of a child sex trafficking ring that Trump is secretly working to bring down. A best-selling book about QAnon “claims that Democrats murder and eat children and that the government created AIDS, polio and Lyme disease” and that “the world is run by a Satanic cabal led by Hillary Clinton,” MarketWatch reported.

Lusk did not get into details about his specific beliefs but said his “knowledge of the evil power players” is what sparked his interest in mounting a congressional bid.

“I pray over making wise decisions and am taking the sword of truth to D.C. to decapitate the swamp creatures, and I’ll chase off the RINOS while I’m there,” Lusk told Florida Politics. “There is plenty of danger and opportunity at the State level, but the State will be toast if Federal problems and mega-Crime syndicates are not brought to justice soon.”

“Q” is even listed as one of the issues on his campaign website, though the page simply says, “Who is…………..Q.”

Lusk told The Daily Beast that he would not use QAnon to guide his actions as a lawmaker unless “criminal leaks or seditious activity” revealed in the clues “warranted an investigation.”

QAnon is far from the only conspiracy theory Lusk subscribes to. The front page of his campaign website says he is concerned he will be “Arkancided,” a reference to the decades-long conspiracy theory that the Clintons had their Arkansas associates murdered.

Lusk has put about $2,000 into his campaign. He told the outlet he is self-funding until he gets a “full understanding of the law.”

While Lusk appears to be the first open QAnon follower to run for Congress, several elected officials have pushed QAnon conspiracy theories publicly.

South Carolina state Rep. Lin Bennett has posted about QAnon for months on her Facebook page. “They’re legit,” she wrote of Q. “And they haven’t been wrong.”

In December, Pam Patterson, a city councilwoman in San Juan Capistrano, California, endorsed Q in her farewell address on the council floor.

“To quote Q, number 2436, for far too long, we have been silent and allowed our bands of strength that we once formed to defend freedom and liberty to deteriorate. We became divided. We became weak. We elected traitors to govern us,” Paterson said. “Where we go one, we go all. Q.”

Earlier this year, a Montana judge named Michael Swingley used his official government email account to scold a reporter for being critical of the QAnon conspiracy theory.

“Whether Q is real or otherwise, there is a movement started by the hypothesis of a Q and somebody behind the scenes standing up for the average American citizen,” Swingley wrote to Washington Post reporter Avi Selk. “Patriots are uniting against people just like you. Your world of fake news and liberal agendas that give away our country to foreigners and protect the Clintons and Obamas is coming to an end. Wait for it……….. you pathetic, snobby ass.”