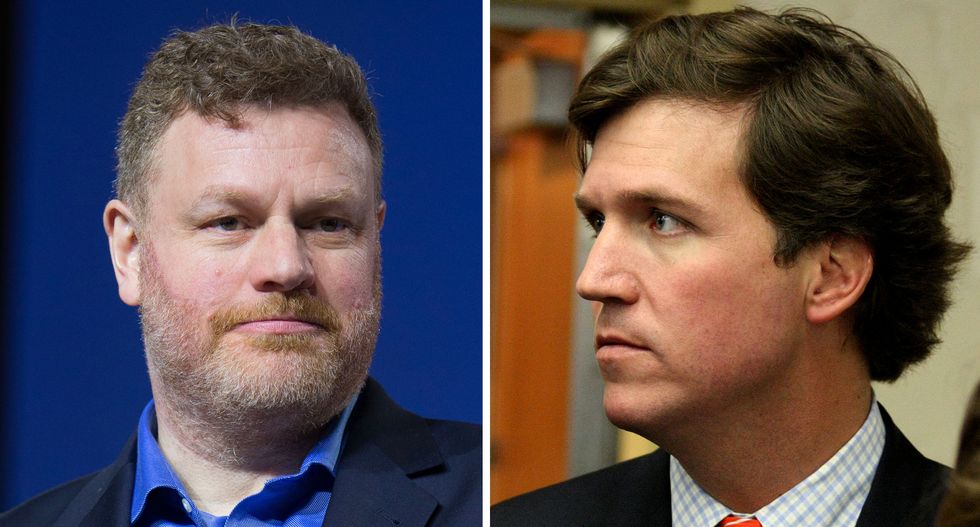 After surviving everything from two world wars to the French Revolution to the Black Plague of the 1340s-1350s, the historic Medieval cathedral, Notre Dame de Paris, was rocked by a major blaze on Monday. The fire has been extinguished, although the building suffered extensive damage and will need to be rebuilt. And when he appeared on Tucker Carlson’s show on Fox News on Monday night, far-right pundit Mark Steyn used the fire as an opportunity to insult France as a “godless” and “post-Christian” society that is being overtaken by Muslims.

Steyn, who has guest-hosted “Tucker Carlson Tonight” on Fox News as well as Rush Limbaugh’s radio show, told Carlson, “Christendom is in retreat in Europe, and in France particularly. France has actually quite an aggressive belief in secularism, and according to some polls, the French are—even by the standards of the modern Western world—among the most godless people.”

Steyn went on to describe the Basilica of St. Denis north of Paris as “a Christian museum in the heart of what is now a Muslim suburb, in effect.” And he claimed that at Notre Dame Cathedral, Christianity is not a “living, breathing faith” but rather, “is just becoming, actually, a museum, an art gallery, a storage facility.”

Speaking to Carlson, Steyn had a hard time pinpointing exactly why France is mourning the damage at Notre Dame. Steyn told Carlson, “The French who were on the streets in tears this evening on the streets of Paris—I don’t think they’re mourning just history or architecture or art or culture. They are mourning something else. But what that something else, post-Christian France—can’t quite identify it. That’s really the conundrum.”

Steyn added that when French President Emmanuel Macron “says we’re going to rebuild it—rebuild it for what? When people talk about, ‘Oh, the heart of France has died’—what is in the soul of France? What is this? Is it just the building or something more?”

The notion that Muslims are overrunning western countries with the help of secular liberals has been a recurring theme in Steyn’s books, which include 2006’s “America Alone: The End of the World as We Know It” and 2011’s “After America: Get Ready for Armageddon.”

Tucker Carlson with the old "I'm not saying it is" but going ahead and feeding the conspiracies "It is not the onl… https://t.co/3nL1xJW7aW
— Salvador Hernandez (@Salvador Hernandez) 1555373919.0