Darwinian existentialism: The history — and evolution — of the meaning of life 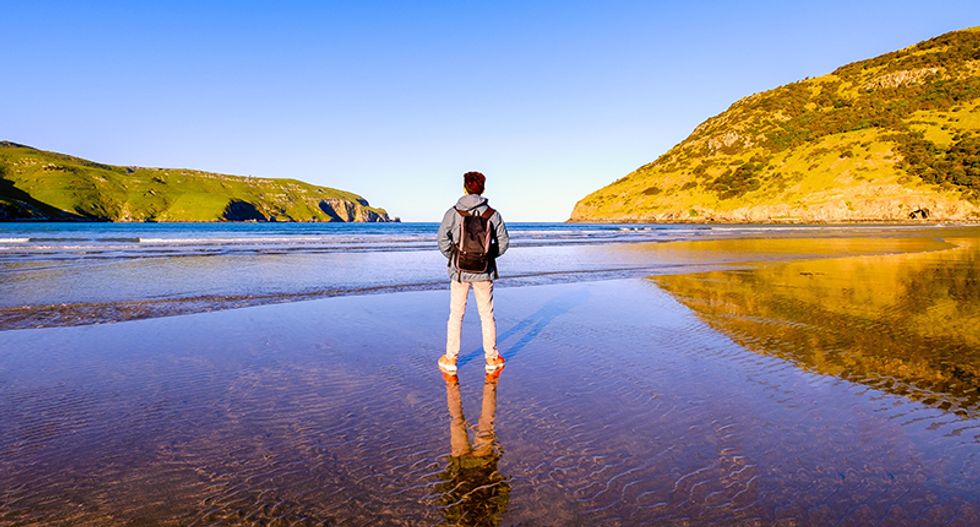 Life's but a walking shadow, a poor player

That struts and frets his hour upon the stage

And then is heard no more: it is a tale

Told by an idiot, full of sound and fury,

This was not the opinion of folk in the Middle Ages.  A very nice young Christian and I have recently edited a history of atheism.  We had a devil of a job – to use a phrase – finding people to write on that period.  In the West, Christianity filled the gaps and gave life full meaning.  The claims about our Creator God and his son Jesus Christ, combined with the rituals and extended beliefs, especially about the Virgin Mary, meant that everyone’s life, to use a cliché from prince to pauper, made good sense. The promises of happiness in the eternal hereafter were cherished and appreciated by everyone and the expectations put on a godly person made for a functioning society.

Then, thanks to the three Rs, it all started to crumble. First the Renaissance, introducing people to the non-believers of the past. Even the great Plato and Aristotle had little place for a Creator God.  Then the Reformation tore into established beliefs such as the importance of the Virgin Mary. Worse, the religious schism suggested there was no one settled answer.  Finally, the (Scientific) Revolution, showed that this plant of ours, Earth, is not the center of the universe but a mere speck in the whole infinite system. This system works according to unbreakable laws – no miracles – and God became, in the words of a distinguished historian, a “retired engineer.”

There was still the problem of organisms, whose intricate design surely had to mean something.  Blind law just leads to rust and decay.  And yet, organisms defy this.  If a clever technician set out to make an instrument for spotting things at great distances, the eye of the hawk is built exactly as one would predict. There had to be a reason.  As the telescope had a telescope designer, so the eye surely pointed to The Great Optician in the Sky. Along came Charles Darwin with his theory of evolution.  He showed, through his mechanism of natural selection – the survival of the fittest – how blind law could indeed explain the eye. Thanks to population pressures, there is an ongoing struggle for existence, or more importantly struggle for reproduction.   Simply, those organisms with better proto-eyes did better in this struggle, and over time there was general improvement.  The hawks with keener sighthad more babies!  They were “naturally selected.”

Darwin did not disprove God. When he wrote his great Origin of Species, 1859, he still believed in a deistic god, a god of unbroken law.  But he made it possible not to believe in God and to be, in the words of Richard Dawkins, a “fulfilled atheist.” More importantly, Darwin suggested that the deity is like the common perception of the God of Job, indifferent to our fate.  Thomas Hardy, novelist and poet, put it well.  He could have stood a God who hated him and caused untold misery. It was an indifferent God who crushed him.

And dicing Time for gladness casts a moan. . . .

These purblind Doomsters had as readily strown

Blisses about my pilgrimage as pain.

Christianity continued, of course, in the post-Darwinian era.  There were and are many believers who embrace Darwinism,although, as is too well known, in America especially there is a vibrant evangelical branch that denies evolution and embraces a literal reading of Genesis.  But what of those of us like Hardy?  He and I were raised asChristiansand – I think I can speak for him too -- all our lives we have been in our ways deeply religious.  An indifferent or absent God does not mean we stop worrying about questions on meaning and purpose.  In fact, we probably worry more, not so much because we are scared but as humans these are important issues for us.  Was Shakespeare right?  Is life no more than a tale told by an idiot, signifying nothing, full of sound and fury?

“The Lord gave, and the Lord hath taken away; blessed be the name of the Lord’’ (Job 1: 21).  Darwin’s theory of evolution has done its fair share of taking away.  Can it also do some giving?  Many evolutionists think it can. In the 150 years plus since the Origin appeared, we find that people who worry about these sorts of things – and there are many who do –embrace one of two approachesto finding an evolution-influenced meaning to life.

First, there are those who might fairly be called the “objectivists.”  Just as Christians think there is an external reality that rules our lives, so these Darwinians – although they have no promises of an eternity – believe that their theory imposes order and meaning on our lives.  This lies in the progressive nature of the evolutionary process – from blob to human, or (as they used to say in the past) from monad to man.  Evolution is not a slow meandering process going nowhere.  Despite setbacks it is on an upwards trajectory, ending in our species.  Order and meaning come out of this.  It is our duty to aid the evolutionary process and help it forward, or at least not to drop backwards.

Today’s most enthusiastic evolutionary progressionist is the Harvard ant specialist and sociobiologist, Edward O. Wilson.  He has devoted the last thirty years of his life to the preservation of the lands where he did so much of his original research: the Amazonian rain forests. Wilson’s Darwinian commitments uncover his reasons. He is not interested in the rain forests as such, but rather as an aid and resource for humankind. They fill the heart with beauty and awe, an essential human emotion.  More practically, they still conceal many natural drugs that may prove of great value to humans.  Hence, we should preserve them.

The trouble with this approach is that Darwinian evolutionary theory is not progressive, at least not in the needed absolute sense. The key mechanism of natural selection says that anything may help the possessors in the struggle for existence.  This can lead to improvement or progress.  Those hawks with keener eyesight outbred those with lesser eyesight.  But it’s all relative.  A mole burying underground does not need keen eyesight.  Indeed, functioning eyes might be a problem, both because they are not used and are taking limited physiological resources and because they are prone to infection and consequent ill-health.  It is the same with the supposed superiority of humans.  Relatively, we may do well.  We were cleverer than the Neanderthals and look at who is around today. Absolute progress is another matter. Large brains are high maintenance and alternative strategies may be preferable.  In the immortal words of the paleontologist Jack Sepkoski: “I see intelligence as just one of a variety of adaptations among tetrapods for survival.  Running fast in a herd while being as dumb as shit, I think, is a very good adaptation for survival.” Cow power rules supreme!

Is there a subjectivist alternative?  One that starts with evolution?  I believe there is, a position I (somewhat grandiosely) call “Darwinian existentialism.”  Sartre said that the key to existentialism is that God’s existence is beside the point. We humans are thrown into the world and must make sense of it ourselves.  Sartre also went on to say that there is no such thing as human nature. On this, as an evolutionist, I disagree strongly. Human nature, Darwinian human nature, certainly exists.  Above all, Homo sapiens is a social creature. We have evolved above all to need and be in with our fellow humans.  The great metaphysical poet, John Donne, hit the nail on the head.

No man is an island,

Every man is a piece of the continent,

A part of the main.

If a clod be washed away by the sea,

Europe is the less.

As well as if a promontory were.

As well as if a manor of thy friend's

Or of thine own were:

Any man's death diminishes me,

Because I am involved in mankind,

And therefore never send to know for whom the bell tolls;

It tolls for thee.

That is the secret, the recipe, for a meaningful life in this Darwinian world.  First, family and the love and security that that brings.  Then society, whether it be going to school, shopping at the supermarket, or simply having a few drinks with friends, and sometimes strangers.  Third, the life of the mind. Shakespeare’s creative works are about people and their relationships – happy (Twelfth Night), sad (Romeo and Juliet), complex (Hamlet), doomed (Macbeth), triumphant (Henry V).  This is the life of meaning.  Take life for what it is.  Enjoy it to the full, realizing that the secret of true happiness is being fully human, taking from and giving to others.  And stop worrying about the future.  There may be one. There may not.  There is a now.

The lover of life knows his labour divine,

And therein is at peace.

The lust after life craves a touch and a sign

That the life shall increase.

The lust after life in the chills of its lust

Claims a passport of death.

The lover of life sees the flame in our dust

And a gift in our breath.