Christians revolt: Students at this top evangelical university are demanding Pence step down as commencement speaker — and suggesting Buttigieg deliver the address instead 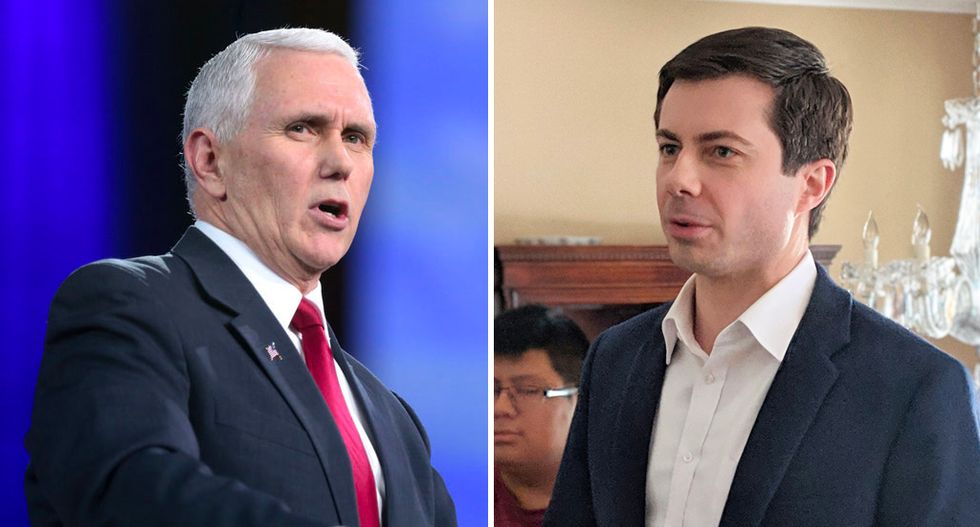 Taylor University is one of America's oldest, private, evangelical colleges. In 2017 the Indiana-based university was ranked first among 94 midwestern schools. Its motto, "Lux et Fides," means, "Light and Faith."

But it is Vice President Mike Pence's undying faith in President Donald Trump that has led the 2019 graduating class to demand the school rescind its invitation to Pence to deliver the commencement address.

"Inviting Vice President Mike Pence to Taylor University makes our alumni, faculty, staff and current students complicit in the Trump Administration's policies, which we believe are not consistent with an ethic of love," the students and thier supporters say via a Change.org petition, as Newsweek reports.

In just a few hours the petition has earned hundreds of signatures.

Many might think, given Pence was the governor of Indiana – where Taylor University is located – that the invitation might not cause concern.

They would be wrong.

Here's a sampling from some of those who signed the petition, explaining why:

"I'm a husband of a Taylor alum and suggest that if Taylor is looking for a Hossier Christian politician for the commencement they might consider inviting Pete Buttigieg."

"Shame on you. He's not a Christian, and any university that invites him to speak has no institutional commitment to fact or Truth."

"If Mike Pence thinks that RFRA was a good 'Christian' direction for the state and nation, then he is missing the point of Christianity. Now he is trying to do it nationally. He is the wrong person to deliver your commencement speech. Perhaps Pete Buttigieg would have a more appropriate message for your graduates."

"There are many marginalized students and staff who live, work, and study in a gray area. The University offers kind words of support to these populations, but then engages in actions that place students on the fringe of Taylor's community. Inviting Pence is one of those actions. Pence's Values (political or personal) are not congruent with that of Taylor or Christianity. Pence's values align with the administration (Looking at you president haines.) So out of touch with the needs of your students - ALL your students. POC, LGBTQ+ (especially Transgender students), Women, Immigrants - they are apart of the Taylor community too! Pence's presence and Taylor's support of Pence enforces the idea that these communities are the outcast."

"The fact that Taylor would invite Pence as a speaker honestly kills me a little bit. I can’t imagine what it must feel like for lgbt students to have to see this man’s harmful bullshit be honored on the Taylor stage. Really disgusting stuff, Taylor. Really ashamed to be an alum right now."

"Class of '95. This link is embarrassing in every possible way. Forget any future support from me if this is the direction Taylor wants to go."

"As an alumna of Taylor University, I've never been so disappointed in my college's behavior. Taylor claims to be dedicated to love and truth. Mike Pence is a man who has worked to sew seeds of division and hatred in this country and has continued to support an administration that openly and blatantly lies about matters large and small, every single day."

"Mike Pence has supported and advocated for harmful, deceptive policies that are in direct contradiction to the Bible's teachings and Taylor's heritage."