An election law expert explains how Citizen's United might have spared Donald Trump Jr. and Jared Kushner from prosecution 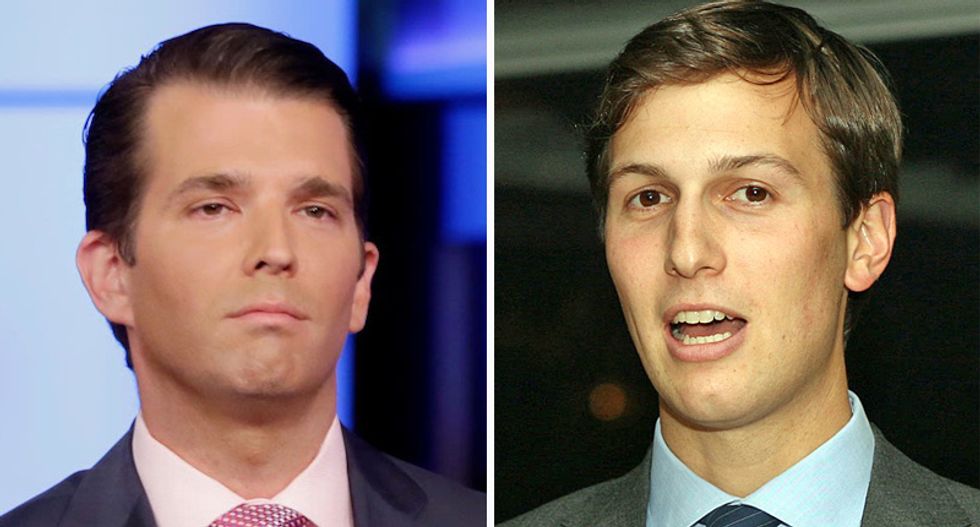 Special counsel Robert Mueller’s final report for the Russia investigation, which Attorney General William Barr released publicly on April 18, not only discusses indictments of various associates of President Donald Trump, it also discusses some Trump associates who weren’t indicted. Two of the ones who weren’t indicted were Donald Trump, Jr. and White House Senior Advisor Jared Kushner, and law professor Ciara Torres-Spelliscy explains in an article for The Atlantic that one of the reasons why might be the United States’ evolving campaign finance laws.

In June 2016, Trump, Jr. and Kushner, along with Donald Trump’s campaign manager at the time, Paul Manafort, were among those who attended an infamous meeting at Trump Tower in New York City. Natalia V. Veselnitskaya, a Russian attorney with ties to the Kremlin, was there as well and, according to Mueller’s report, promised dirt on Democratic presidential nominee Hillary Clinton. And Torres-Spelliscy has some thoughts on why Trump, Jr. and Kushner were never indicated for campaign finance violations.

“The special counsel’s office,” Torres-Spelliscy writes, “could not establish” that Trump, Jr. or Kushner “had knowingly aided and abetted Russians in violating campaign-finance rules meant to fence out foreign involvement in American elections.”  But the law professor adds that “there was another reason Mueller might have shied away from prosecuting Kushner and Trump Jr. for a campaign-finance conspiracy”: Mueller “would have faced the real possibility that a hostile Supreme Court could rule unconstitutional whichever campaign-finance law he used to charge them.”

Mueller’s investigation led to Manafort facing a long list of criminal charges, including bank and tax fraud. But none of the charges Manafort was convicted of in 2018, Torres-Spelliscy points out, were a direct result of his presence at the June 2016 Trump Tower meeting.

Mueller’s probe, Torres-Spelliscy explains, “proceeded against a backdrop of a conservative Supreme Court’s systematic deregulation of campaign finance from 2006 to the present.” And that includes the High Court’s 2010 ruling in the case Citizens United v. Federal Election Commission, which described campaign spending as a form of speech protected by the 1st Amendment of the United States Constitution.

Torres-Spelliscy observes, “A key question in the Mueller investigation was whether Trump Jr. and others in the campaign had illegally abetted the Russian operatives who had promised ‘dirt on Hillary Clinton’ — presumably, stolen e-mails from the Democratic National Committee. Had the Russians shown up at Trump Tower with cash for its namesake’s 2016 campaign, that clearly would have violated the foreign ban. The crux of the issue under campaign-finance law is whether stolen e-mails constitute ‘a thing of value’ for the purpose of the foreign-donor prohibition.”

Torres-Spelliscy concludes the Atlantic piece by stressing that Congress needs to “shore up federal campaign-finance laws” by closing “the foreign loopholes that the Mueller report exposed…. Otherwise, future American confederates could plead ignorance—and get away with helping foreigners interfere with the 2020 election, too.”