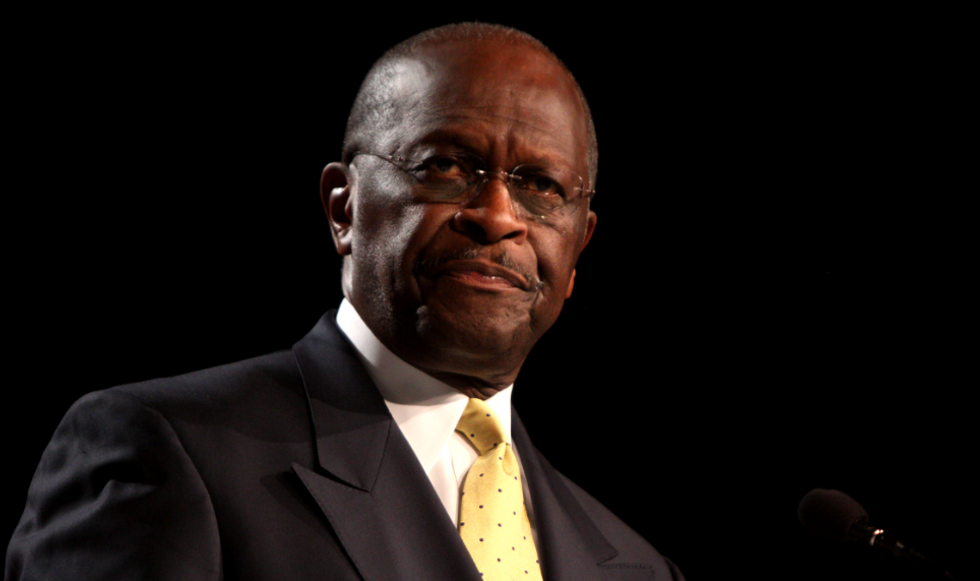 Herman Cain, whose untenable nomination to the Federal Reserve Board of Governors was DOA after at least four GOP Senators made clear they would not vote for him, has his own version of what just happened.

Earlier Monday President Donald Trump announced that Cain had "asked" him to not nominate him to the Fed. Serving on the Federal Reserve Board of Governors is not only a tremendous honor, it is an opportunity to shape the monetary policy and economy of the United States, and thus, the world.

But as Cain, the former Godfather's Pizza CEO and former GOP presidential candidate who was forced to pull his name from consideration in that endeavor as well after five women accused him of sexual misconduct, serving would have just been a pay cut.

Cain apparently writes a column (archived version) in a far right wing website called The Western Journal, which was founded by the man who also founded the Citizens United PAC, which brought and won the horrific Citizens United case to the Supreme Court.

Telling readers, "here’s the truth," Cain writes that he "went through Phase 1 of the background check."

"At the same time, I was told what the ethical restrictions would be," Cain says. "I would have to let go of most of my business interests. I could not serve on any boards. I could not do any paid speeches. I could not advocate on behalf of capitalism, host my radio show or make appearances on Fox Business."

Really? He "could not advocate on behalf of capitalism"?

Apparently, all that adds up to a big chunk of change, and serving his fellow citizens would just be too big of a pay cut for Cain. He allegedly "has an estimated net worth of $18 million," according to one website, and $7 million according to another.

"Without getting too specific about how big a pay cut this would be," Cain told readers on Monday, "let’s just say I’m pretty confident that if your boss told you to take a similar pay cut, you’d tell him where to go."

That sure sounds like he's saying he told the President where to go, doesn't it?

He continues, saying, "the cost of doing this started weighing on me over the weekend. I also started wondering if I’d be giving up too much influence to get a little bit of policy impact. With my current media activities, I can reach close to 4 million people a month with the ideas I believe in."

What kind of "ideas" does Cain believe in so much that are worth more to him than a seat on the Federal Reserve?

His most recent columns at The Western Journal are titled, "These people are mentally ill," "These people are crazy," and "Fight the left’s anti-Trump lies with Truth Cards; here’s how," which appears to be more of an ad for the website, TruthCardCain.com.

In the end, Cain says he "felt God was giving me my answer."