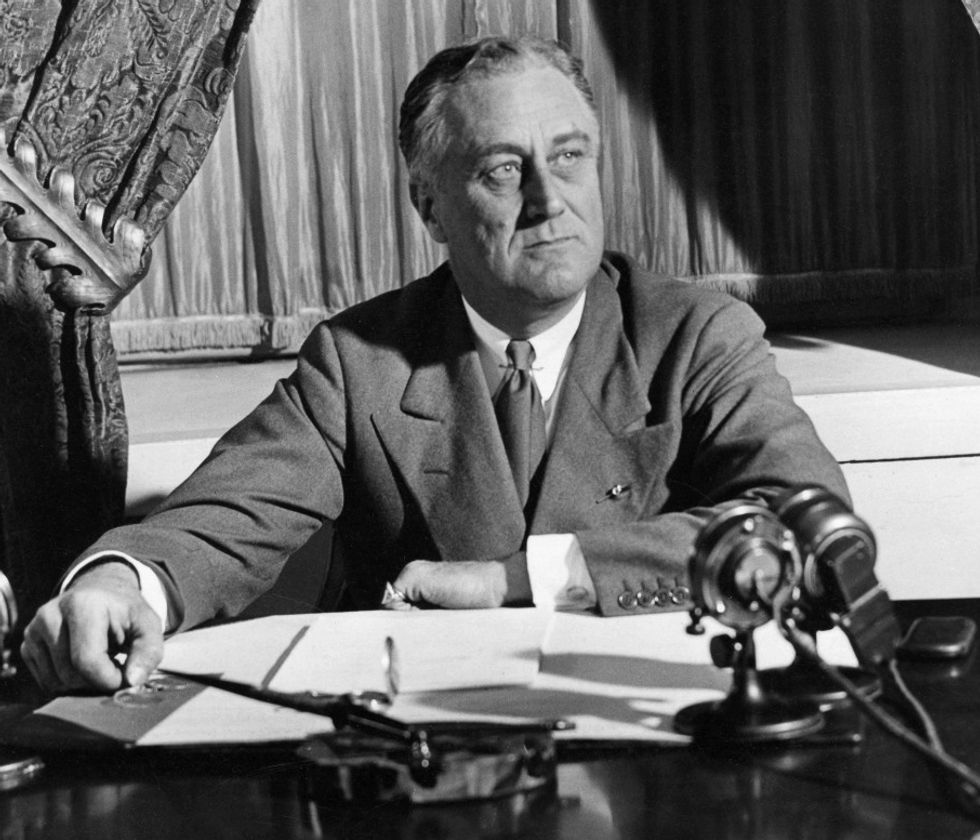 In 1933, a group of very wealthy bankers on Wall Street were mortified with FDR. He gave government jobs to many unemployed, ended the gold standard, and was planning on enacting a slew of government programs that would constitute the “New Deal”. Workers would be given the right to unionize, infrastructure projects would be established, and he pitched a pension program for workers called Social Security. For that, he was called a “socialist.” Up to that point, however, his gravest sin was going after the wealthy to pay their fair share.  The Revenue Act, which imposed a “wealth tax” on those at the top, increased the tax rate to 75%.

Roosevelt was accused of being a “traitor to his class”.

Unlike what the GOP says today, Roosevelt wasn’t trying to do any great social experiment. He was trying to pull our nation out of the Great Depression. Unemployment was between 80-90% at several major cities, and those few who were working were being exploited with zero labor protections.  FDR took action. He was hated by the rich, and he didn’t care:

The forces of ‘organized money’ are unanimous in their hate for me – and I welcome their hatred.

The bankers felt that FDR was going after their money, but they went far beyond just trying to sway the election. Some decided that this whole democracy thing just wasn’t working, and they had to take matters into their own hands. This was a few years before the extent of the horror inflicted by the Nazis had surfaced, and fascism had several believers within the American right.

The bankers plotted a coup against FDR, which would later be called the Wall Street Putsch. The conspirators included a bond salesman named Gerald MacGuire, the commander of the Massachusetts American Legion Bill Doyle, and investment banker Prescott Bush.  Yes, that Bush---father of George H.W. and grandfather of W.

They tried to recruit a general named Smedley Butler to their cause. They arranged several meetings and were quite blunt in what they wanted:

The conspirators would provide the financial backing and recruit an army of 500,000 soldiers, which Butler was to lead.

The pretext for the coup would be that FDR's health was failing. FDR would remain in a ceremonial position, in which, as MacGuire allegedly described, "The President will go around and christen babies and dedicate bridges and kiss children."

The real power of the government would be held in the hands of a Secretary of General Affairs, who would be in effect a dictator: "somebody to take over the details of the office — take them off the President's shoulders. […] A sort of a super secretary."

Unfortunately for the conspirators, the general didn’t bite. In fact, he exposed them at a Congressional hearing as traitors.  Initially, Congress and the press treated this whole thing as a joke. However, with Butler’s testimony, along with a reporter who was at one of the meetings, Congress opened an investigation. They found out it was indeed true, but decided not to do anything about it because the plot seemed so far-fetched. No one was prosecuted.

Sadly, this wouldn’t be the last time a wealthy person got away with treason.

The wealthy plutocrats determined they had a problem.  As much as the American people were suffering, they believed in democracy. They believed in America, and had contempt for dictatorship. No coup could have worked back then even if Butler had agreed to march on Washington. People wouldn’t have stood for it.  So the strategy changed: the kind of Ayn-Randian changes that they wanted could never happen in a democracy. The majority doesn't want welfare for the rich, denial of healthcare, repeal of the estate tax, or destruction of the social safety net.  So democracy itself had to go.

For years, the plutocrats have spent a fortune on campaigns, rightwing media, and astro-turfing groups to cultivate a bizarre authoritarian ideology. I’ve written about the phenomenon of conservative submission before, but I argue that it didn’t happen overnight. It has taken a while, but now a large segment of our population has been utterly convinced that they need to align their beliefs with whatever benefits those at the top. Simultaneously, through constant bombardment from rightwing media, they are fed a steady diet of fear and paranoia about other people. They are told repeatedly that they need a strong leader to save and protect them. These are the ingredients for authoritarianism.  For the rich, it doesn’t really  matter who the person is, as long as he takes control and gives them what they want.

According to a study by the University of Massachusetts, the inclination to support authoritarianism is now the most statistically significant trait that identifies someone as a modern, Trump-supporting republican.

Now, when Trump threatens to send the Feds against people on TV who satire him, or threatens to use the military, police, or “biker gangs” against those who speak out against him, these people cheer.

His supporters openly call for dictatorship. They don’t even bother to hide it anymore:

After World War II, what people hated the most was a fascist dictator. Ironic that is exactly what the modern GOP is now demanding. This time, there won’t need to be any ridiculous military coup attempt, but rather just a couple million manipulated morons willing to surrender their rights.