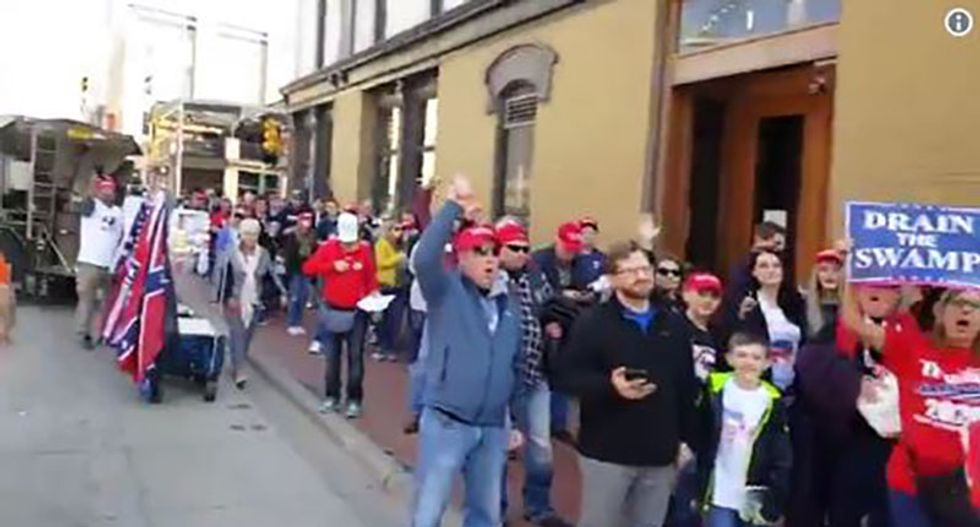 A disturbing video filmed outside of President Donald Trump's rally at the Van Andel Arena in Grand Rapids, Michigan on Thursday shows a large number of Trump supporters are not only aware of, but appear to believe in a false and harmful conspiracy theory that is attacking liberals and Democrats, calls "QAnon."

The "QAnon" conspiracy theory suggests that there is a "deep state" cabal working within the federal government the take down President Trump via a coup led by former President Barack Obama, former Secretary of State Hillary Clinton, and the right's favorite target to hate: George Soros.

Buzzfeed last year described QAnon as "a nonsensical and evidence-free mega-conspiracy theory that claimed Donald Trump was appointed president by the military to save the nation from a pedophilia ring. The hysteria around it has recently placed people in real danger."

"Adherents of the Qanon conspiracy theory," NBC News' Ben Collins earlier this month reported, "falsely believe that the world is run by a Satanic cabal helmed by former presidential candidate Hillary Clinton, and that President Donald Trump and Special Counsel Robert Mueller are secretly working in tandem to eliminate the cabal."

Collins reports on the QAnon cult as part of what he calls his "dystopian beat.'"

So many things in American society had to fail for this many people to believe one party is run by an actual Satani… https://t.co/3GXha2oNiy
— Ben Collins (@Ben Collins) 1553834897.0

How many of Trump's supporters appear to believe in this dangerous conspiracy theory, and appear to support it?