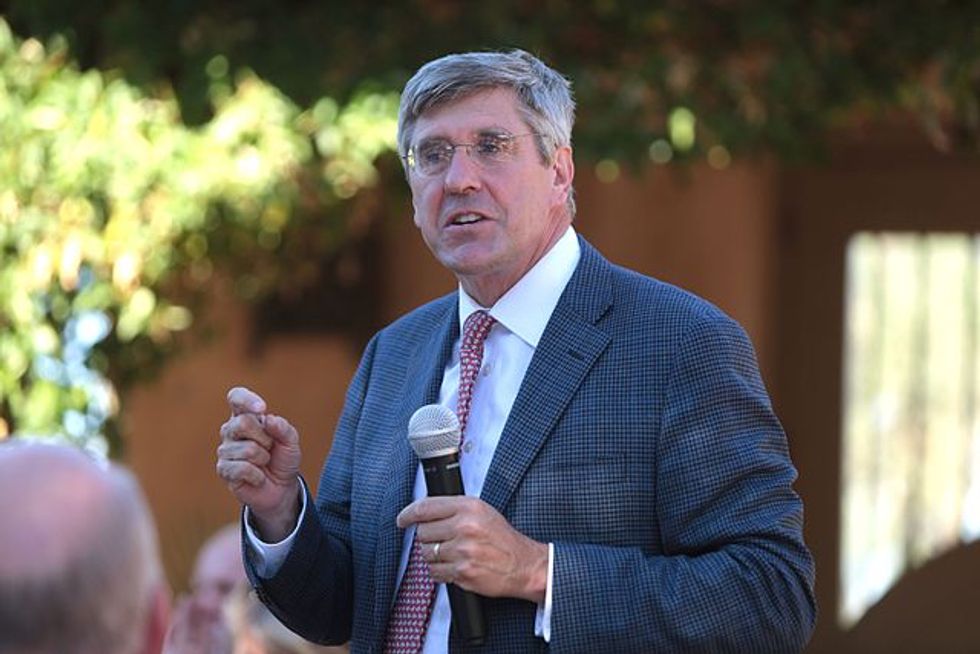 On Friday, President Donald Trump announced he will be nominating Stephen Moore to the Federal Reserve Board of Governors, sparking an outcry from economists who consider him overtly partisan and unqualified for the role.

And according to Bloomberg News, Moore hardly pushed back on the notion that he was unsuited to govern one of the most powerful economic institutions in the United States:

"I'm kind of new to this game, frankly, so I'm going to be on a steep learning curve myself about how the Fed operates, how the Federal Reserve makes its decisions," Moore, 59, said on BTV. "It's hard for me to say even what my role will be there, assuming I get confirmed."

He also tweeted on Friday, thanking Trump "for the opportunity to serve & for your zealous commitment to freeing the American economic engine from government overreach & oppressive taxation!"

Moore's admission that he will have to learn as he goes how the Fed works is not confidence-inspiring. Nor is his apparent belief that he could use his position at the Fed to "free" the economy from "oppressive taxation" — the Fed doesn't control tax rates, it controls interest rates, and it technically doesn't even directly do that.

Indeed, Moore does not have the typical qualifications of a Fed appointee, the vast majority of whom have a PhD in economics. Moore has a Master of Arts degree from the famously right-wing George Mason University and served as a fellow at the also famously right-wing Heritage Foundation. He has advised several GOP campaigns, including Trump's, and co-wrote a book with conservative economist Art Laffer titled "Trumponomics: Inside the America First Plan to Revive Our Economy."

Moore is a proponent of supply-side economics, the theory that tax breaks for billionaires and corporations will increase investment and production to the point that prices fall for everyone else — which has broadly failed but nonetheless forms the backbone of the Republican Party's economic agenda. As a pundit, he has made some spectacularly wrong predictions, like that the U.S. was risking hyperinflation during the Obama years and that ACA was increasing the deficit. His errors have had human consequences: he helped craft former Kansas Gov. Sam Brownback's tax cut plan, which essentially wrecked the state.

The nomination especially makes no sense because Moore has long had it in for Jerome Powell, the Fed chairman Trump appointed in 2017 because he was taller than then-Fed chairwoman Janet Yellen (yes, really). Ironically, after Moore spent years warning that hyperinflation was right around the corner under Obama, he has since made a 180-degree reversal under Trump and claimed that the Fed's interest rate hikes — the main way they prevent inflation — are to blame for why the GOP's massive corporate tax cuts aren't working.

It is safe to assume that if Moore is appointed, he will spend a lot of time fighting with Powell over interest rates, which may actually be the point. Trump has increasingly suffered buyer's remorse on his Fed chairman, raging that Powell isn't doing enough to boost spending. Which would be all well and good if Moore knew what he was talking about. But as even he now seems to be admitting, he doesn't.