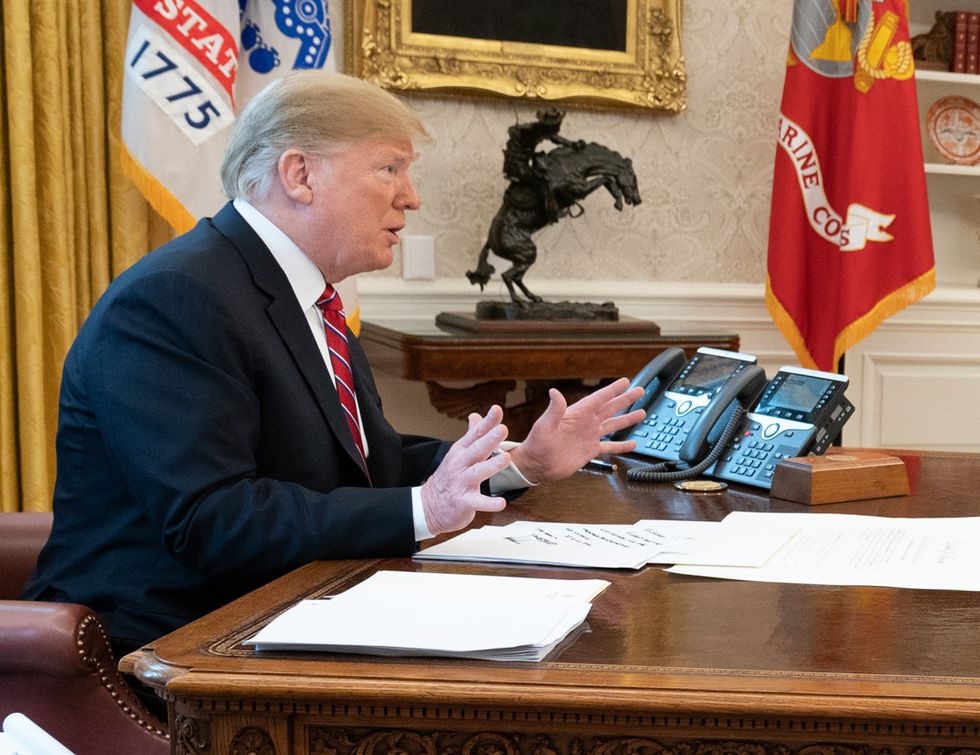 At many different points in his presidency, Donald Trump has appeared to have no idea what was actually happening in the administration he is supposed to run. And on Friday, Trump made that fact vividly clear yet again with a stunning — even for him — post on Twitter.

After the Treasury Department announced it would be levying new sanctions on shipping companies for working with North Korea, the president abruptly reversed that decision:

It was announced today by the U.S. Treasury that additional large scale Sanctions would be added to those already e… https://t.co/AZJYyngvAh
— Donald J. Trump (@Donald J. Trump)1553275379.0

(In fact, the announcement was made on Thursday, not Friday.)

Though he's in charge of the executive branch, this is a completely unorthodox and reckless approach to sanctions policy. If Trump had a strong opinion in the Treasury Department's coming sanctions decision, he could have intervened earlier and avoided sending such conflicting messages. Instead, he made clear that he had no idea what was going on right under his nose in the Treasury Department through the formal sanctions process, making himself look inept and weak. Perhaps more importantly, however, he sends the message to the rest of the world that nothing the executive branch does has any authority unless he has personally weighed in — a move which undermines the government's ability to accomplish, well, almost anything, as well as the undercutting the rule of law.

"What?" said national security lawyer Bradley Moss in response tot he tweet. "Treasury goes through their sanctions process and then at the drop of a hat you reverse it?"

CNN reporter Kaitlin Collins noted that the turnabout was "Big."

"The sanctions were on Chinese shipping companies that the Trump administration said helped North Korea evade international sanctions," she said. "Treasury Secretary Mnuchin said the 'full implementation' of those UN sanctions is "crucial" to the success of North Korea denuclearizing."

“The United States and our like-minded partners remain committed to achieving the final, fully verified denuclearization of North Korea and believe that the full implementation of North Korea-related UN Security Council resolutions is crucial to a successful outcome,” said Treasury Secretary Steven Mnuchin said in a press release. “Treasury will continue to enforce our sanctions, and we are making it explicitly clear that shipping companies employing deceptive tactics to mask illicit trade with North Korea expose themselves to great risk.”

John Bolton, the president's national security adviser, had said Thursday that the sanctions were "important" and that "the maritime industry must do more to stop North Korea’s illicit shipping practices."