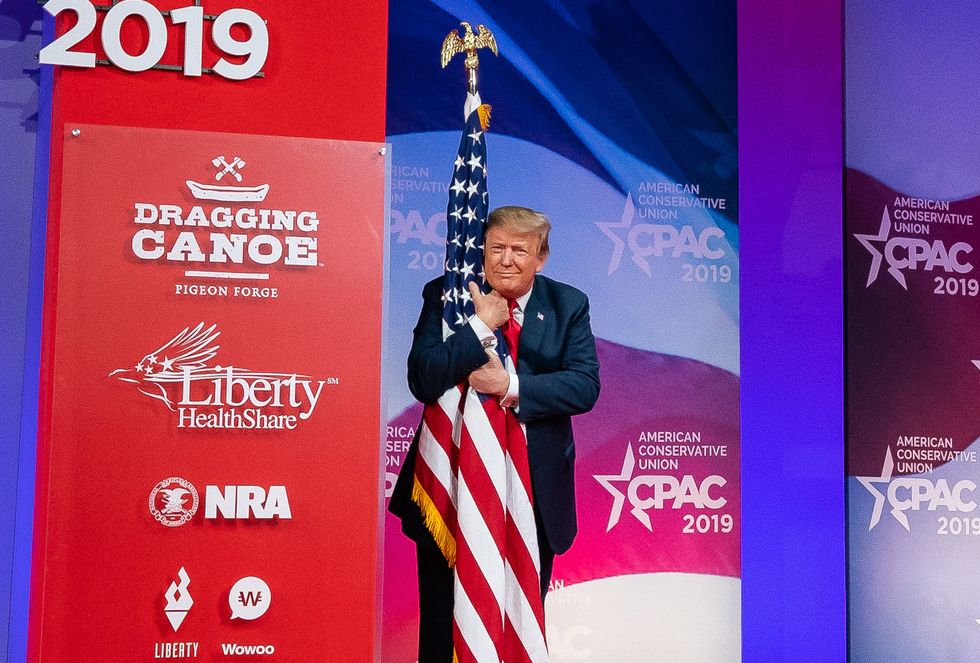 If over the weekend you saw a rambling madman give a frighteningly incoherent, sweaty, two-hour shoutfest of a speech at a right-wing summit, then you viewed a president coming unglued on national television in a way that has probably never been seen before in United States history. And that is extraordinary cause for alarm.

But if, instead, you saw nothing more than a "fiery" Donald Trump give a "zigzagging," "wide-ranging," "campaign-like" address where the Republican really "let loose," then you likely work for the D.C. press, which once again swung and missed when it came to detailing the escalating threat that Trump represents to the country.

Specifically, newsrooms today nearly uniformly refuse to address the mounting, obvious signs that Trump is a deeply unstable man, as the CPAC meltdown so obviously demonstrated. Most reporters simply do not want to mention it. "In most ways, it was just another campaign rally for the president, in flavor, content, and punchlines," the Daily Beast reported, summing up Trump's CPAC calamity. In other words: Nothing to see here, folks.

That was typical of CPAC coverage. "Trump derides Mueller probe, mocks Democrats and his former attorney general," the Washington Post headline announced. The accompanying article didn't include even the slightest hint that Trump's speech was a flashing neon-red sign of a man teetering on the edge. That is a bionic-level attempt to normalize Trump and his CPAC disaster, where he referred to 2020 Democratic candidates as “maniacs," suggested they "hate their country," and accused the Democratic Party of supporting “extreme late-term abortion.”

That wasn't just some “long-winded” or “rambling” speech. That was pure insanity, and the fact that a sitting president unleashed such a bizarre performance, punctuated by so many incomprehensible nonsequiturs, means his stability and capacity ought to be questioned—and it ought to be a pressing news story.

Don't just take my word for it. Daniel Dale of the Toronto Star, who has spent more time than most listening to Trump speeches and meticulously detailing his relentless lies, confidently declared that the CPAC address was the most bizarre of Trump’s presidency, and that was only halfway into Trump’s marathon presentation of mangled gibberish on Saturday.

The overall media disconnect was so striking that even a U.S. senator beseeched the press to do better:

If you watched that two hour speech, which was genuinely next level bonkers and wrote a headline like “an energize… https://t.co/5fYCafD7is
— Brian Schatz (@Brian Schatz) 1551581075.0

Trump's creepy CPAC address is just the latest example of his public unraveling, which is why it's odd that we're at the point where the Republican husband of a Trump adviser is willing to openly raise concerns about the president's stability, but most of the D.C. press is not.

Luckily, some journalists are addressing the key issues. Al Jazeera English's Mehdi Hassan recently hosted a podcast titled "Why Won’t the Media Discuss Trump’s Mental Instability?" And following one of Trump's signature Rose Garden performance art routines, Esquire's Charles Pierce stressed, "If your uncle behaved like the president behaved on Friday, you'd hide his car-keys, lock up the booze, and drive him to the neurologist."

But why the larger hesitation among the press? Why the lack of necessary truth-telling? It's the same reason lots of large news organization, to this day, won't call Trump a liar, even though he's on pace to tell more than 16,000 lies while in office. Logically, the "liar" ban makes no sense. It's only until you realize it's in place for political reasons that you see why it's done. News outlets don't want to take heat from conservatives and from the administration for calling Trump a liar. So even though they've documented that he lies all the time, reporters opt for timid words like "falsehoods" to soften the blow.

The same is true with regard to Trump's unstable behavior. There's not one working member of the Washington press corps who watched Trump's epic and unsettling CPAC meltdown and thought, “He's seems stable, and I have no questions about his mental capacity." They all know it's a pressing issue. But newsrooms don't want to suffer the backlash—the shouts of "Liberal media bias!"—that would rain down on journalists who tackle the story, even though it's so obviously newsworthy.

Also, my hunch is the press simply doesn't want to open the Pandora's box by suggesting the president of the United States often appears to be unstable because, of course, that would require the media to aggressively cover that story. Instead, the press seems far more content to maintain the narrative that Trump is somewhat of an eccentric and gives "fiery," "wide-ranging" speeches. In other words, Trump once again has intimidated the press, and effectively set up barriers for what’s to be covered. Following the stunning CPAC debacle, is there any kind of public behavior that Trump could unleash that would trigger an honest newsroom debate about Trump's stability? That seems doubtful. And Trump knows it.

I understand there's long-established hesitancy on the part of specialists to try to diagnose somebody if they’re not a direct patient. But even on that front, more and more experts are speaking out (e.g., "Mr. Trump is a sociopath"). “We, the undersigned mental health professionals, believe in our professional judgment that Donald Trump manifests a serious mental illness that renders him psychologically incapable of competently discharging the duties of President of the United States," reads a petition signed by 70,000 mental health professionals.

When it comes to absent coverage of Trump's mental stability, I'm not suggesting it needs to be clinically based. But when the president of the United States gives a nearly incomprehensible, two-hour, flag-hugging performance, the press cannot and should not look away and pretend that Trump's behavior even remotely approaches what passes for normal in American politics, let alone for an occupant of the Oval Office.

The president is not well. And that's a helluva news story.