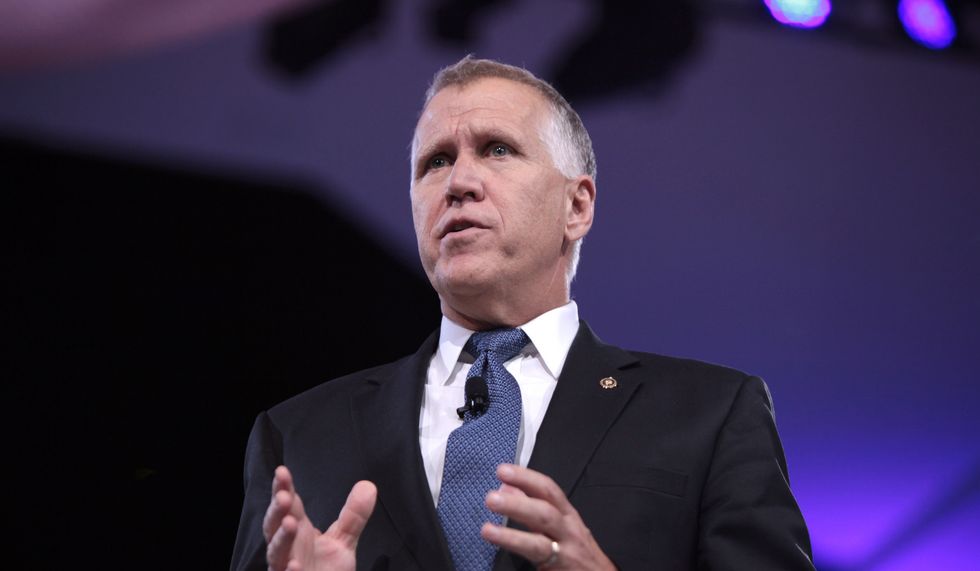 Many political observers assumed Sen. Thom Tillis (R-NC) would be among those in President Donald Trump's party breaking with the White House in a historic show of disunity Thursday as the Senate voted 59-41 in opposition to the declaration of emergency at the U.S.-Mexico border.

But when the final votes were cast, Tillis was not one of the 12 Republicans joining the Democrats in rebuking the president — despite the fact that he had written a pointed op-ed for the Washington Post declaring that he would vote to oppose the declaration.

Trump had issued the declaration in an attempt to reallocate funds from the military to construct barriers at the U.S.-Mexico border. He felt compelled to take this route because his negotiations with Congress — which included a failed effort to leverage a disastrous government shutdown — extracted minimal concessions from Democrats on his promised "border wall." Though many Republicans support Trump's policy on the border, some believe that emergency declaration is an unconstitutional power grab that seizes authority that rightly belongs to Congress.

Tillis was a key voice making that argument up until Thursday.

"As a U.S. senator, I cannot justify providing the executive with more ways to bypass Congress. As a conservative, I cannot endorse a precedent that I know future left-wing presidents will exploit to advance radical policies that will erode economic and individual freedoms," he wrote in the Washington Post. "These are the reasons I would vote in favor of the resolution disapproving of the president’s national-emergency declaration, if and when it comes before the Senate."

"No Profile in Courage Award for you, big guy," said Steve Benen, a producer on The Rachel Maddow Show, after Tillis' reversal.

"The White House had been lobbying Tillis to change his vote, confused why he was voting yes in the first place," noted CNN producer Kaitlan Collins. "This means their pressure campaign worked on one senator."

Reporter Robert Costa said that conservative activists were considering drafting a primary challenger to Tillis had he voted for the resolution.

And on Wednesday, The Hill had reported that there was danger ahead for Tillis if he veered too far from the president's wishes:

Sen. Thom Tillis (R-N.C.) is under fire from conservative activists for supporting a Democratic effort to block President Trump’s emergency declaration to fund his border wall.

The activists have also raised Tillis’s legislation to shield special counsel Robert Mueller from any interference by Trump.

Some county GOP party leaders are openly calling for Tillis to face a primary challenge.

He may well have secured his position against a Trump-loving opponent from his right. But on the other hand, no one should ever take anything he says in an op-ed seriously again.