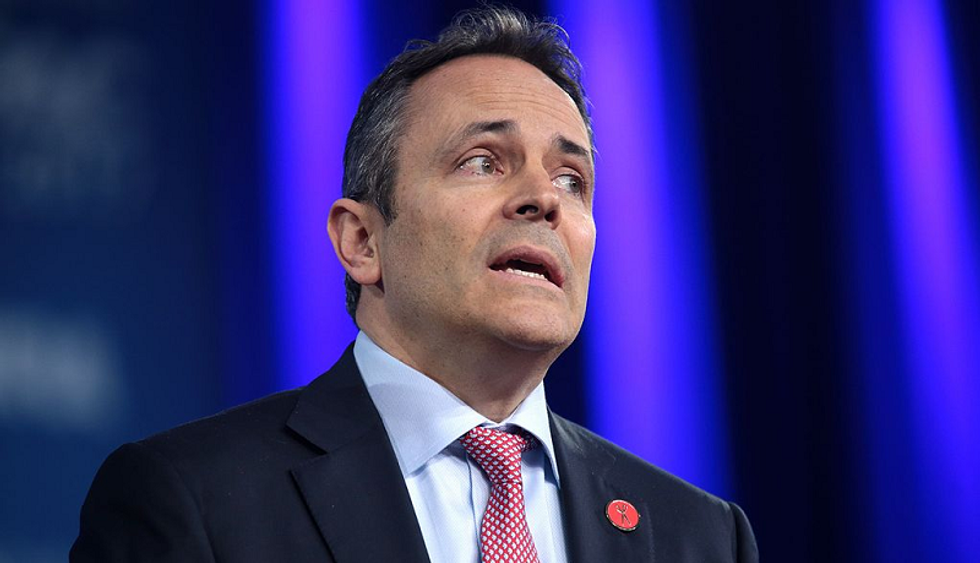 Gov. Matt Bevin (R-KY) told WKCT radio on Tuesday that he opposes mandating vaccines to send children to school — and as evidence that there are alternatives, explained that he had deliberately infected his children with chickenpox.

Bevin, who has nine kids including four who were adopted, explained that after contracting the virus, they were "miserable for a few days" but "they all turned out fine." He added that parents should vaccinate if they are afraid of the disease, but that we shouldn't make it compulsory.

Bevin's downplaying of the necessity of vaccines is reckless — but deliberately infecting his children is much more so. Though most children who suffer from chickenpox recover with no problems and never get the disease again, in severe cases it can cause pneumonia, bleeding, sepsis, encephalitis, and in some cases can be fatal. Bevin has also put his children at risk of developing shingles in later life, a painful rash caused by the dormant Varicella virus reactivating.

Before the chickenpox vaccine was introduced in the United States in 1995, there were around 4 million cases of the disease every year, with up to 18,000 hospitalizations and 100-150 deaths. Despite the risks, "chickenpox parties" like Bevin's used to be fairly common, with parents who believed the disease was inevitable deliberately infecting their children young so they wouldn't get the disease as adults when it is much more dangerous.

Even before the vaccine was developed, deliberately infecting children was a dice roll with their health. And the Centers for Disease Control and Prevention makes clear that it "strongly recommends against hosting or participating in these events. Chickenpox can be serious and can lead to severe complications and death, even in healthy children. There is no way to tell in advance how severe your child’s symptoms will be. So it is not worth taking the chance of exposing your child to someone with the disease. The best way to protect infants and children against chickenpox is to get them vaccinated."

But in an age when anti-vaccine conspiracy theories travel far and wide online and many parents are afraid of taking their pediatrician's advice, Kentucky's loose vaccination laws directly incentivize parents to follow Bevin's lead. In Kentucky, parents who want to send unvaccinated kids to school can obtain a religious exemption, or provide proof that their childen have already had the disease — which all but invites parents to use chickenpox parties as an alternative if they erroneously oppose vaccines.

Bevin has shown his lack of concern for children's safety on previous occasions. In January, during a deadly cold snap that plunged temperatures in Kentucky to below zero, Bevin scorned the decision of public schools to shut down, saying "we're getting soft" and that we shouldn't be teaching children that "you can curl up in the fetal position somewhere in a warm place and just wait until it stops being hard." Evidently, Bevin never stopped to think that many children walk to school, and would be risking frostbite and hypothermia.

Kentucky is one of three states that holds gubernatorial elections in 2019, along with Louisiana and Mississippi. Bevin, who is highly unpopular despite the state's deeply conservative lean, faces a tough re-election battle, with GOP state Rep. Robert Goforth challenging him in the primary and Democratic state Attorney General Andy Beshear, state House Minority Leader Rocky Adkins, and former state auditor Adam Edelen vying to take him on in the general election.