The racism of Mark Meadows: How the House Freedom Caucus chair went from prominent birther to Trump's biggest defender 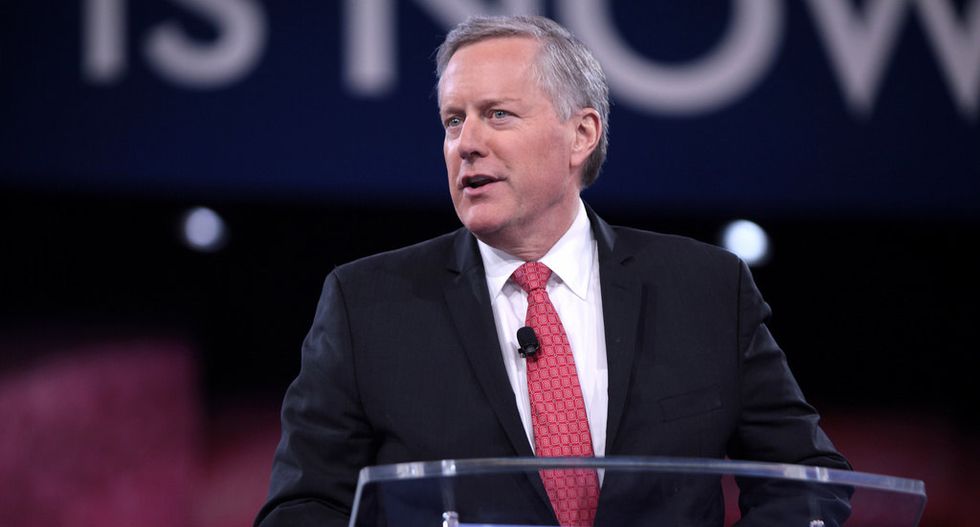 When President Donald Trump’s former personal attorney, Michael D. Cohen, testified before the House Oversight Committee on February 27, one of the many things he addressed was Trump’s history of making racist comments. Ohio Rep. Jim Jordan, North Carolina Rep. Mark Meadows and other Republican congressmen were quick to express their outrage—not at Trump, but at Cohen. And Meadows (a Tea Party favorite who heads the far-right Freedom Caucus) made a buffoonish attempt to discredit Cohen’s assertions that Trump is a racist. But in the process, all Meadows succeeded in doing was drawing attention to his own history of bigotry.

In order to demonstrate that Trump is not a racist, Meadows brought in a 46-year-old African-American woman named Lynne Patton—who was appointed to the Department of Housing and Federal Development (HUD). Before working in the Trump Administration, Patton worked in the private sector as an event planner in New York City and worked for the Trump Organization as well as the Eric Trump Foundation.

During the House Oversight Committee hearing, the 59-year-old Meadows indignantly told Cohen, “You made some very demeaning comments about the president that Ms. Patton doesn’t agree with…. I asked Lynne to come today in her personal capacity to actually shed some light. She says that as a daughter of a man born in Birmingham, Alabama, that there is no way that she would work for an individual who was racist.”

In other words, Meadows was saying that some of President Trump’s best friends are black. And Rep. Rashida Tlaib of Michigan didn’t hesitate to call the North Carolina congressman out during the hearing, asserting that as a woman of color, she found it deeply offensive that he used Patton as a “prop.”

Racism comes in different forms in the United States, some more overt than others. A full-fledged member of the Ku Klux Klan (KKK) or the Aryan Nations or an avowed racial separatist would not claim that some of his best friends are black; he would take pride in not having any friends who are black, Jewish, Asian or gay. But not all racism is that in-your-face—and not all racists call for total racial separatism. The fact that Trump has employed some African-Americans at times and has friendly relations with rapper Kanye West doesn’t discredit Cohen’s testimony.

Some of Meadows’ racism, however, has been overt. Back in 2012, when Barack Obama was president, Meadows promoted the racist “birther” conspiracy theory—which claimed that President Obama was really born in Kenya and wasn’t a citizen of the United States. Obama’s birth certificate proved that he was born in Honolulu, Hawaii on August 4, 1961 and that he was a lifelong U.S. citizen; regardless, everyone from author Jerome Corsi to Trump to Meadows was happy to promote the idiotic “birther” theory in order to pander to the worst instincts of the Republican Party.

At a Tea Party event in 2012, Meadows told a crowd of bigots, “2012 is the time we are going to send Mr. Obama home to Kenya or wherever it is.” And that 2012 clip has been tweeted this week by activist Michael Moore, comedian Sarah Silverman and other Trump critics. On February 27, Silverman—who has never been shy about calling it as she sees it—posted, “This is the man who brought a black employee of Trump’s to the hearing today to prove Trump isn’t racist. Mark Meadows is a fucking PIG.”

At another 2012 gathering, Meadows was asked if he would favor a congressional investigation to determine whether or not Obama was really a U.S. citizen. Meadows responded, “Yes…. If we do our job from a grass roots standpoint, we won’t have to worry about it. We will send him back home to Kenya or wherever it is. We’ll send him back home.”

Politically, Meadows is so far to the right and such an extremist that even former House Speaker John Boehner can’t stand him. In an October 2017 interview with Vanity Fair’s Tina Nguyen, Boehner said of Meadows, “He’s an idiot. I can’t tell you what makes him tick.”

Unfortunately, the House of Representatives is stuck with Meadows for now. Although Democrats enjoyed a net gain of 40 seats in the House in the 2018 midterms, Meadows was reelected and defeated Democrat Phillip Price by 21% in North Carolina’s 11th Congressional District. And for now, he remains one of Trump’s most ardent supporters—regardless of how damning Michael Cohen’s testimony was.